Preposterous: WashPost Claims Dan Savage Is All About 'Healing' and 'Reconciliation'

The Washington Post occasionally must enjoy sounding completely preposterous. In a Tuesday book review, we’re told in the headlines that gay activist and sex columnist Dan Savage is “on a healing mission” and underneath his “wit,” he only “wants reconciliation.”

The Post, which routinely avoids stooping to review conservative best-sellers, assigned gay activist Chandler Burr (“the former scent critic of the New York Times”) to spray perfume all over Dan Savage’s new book, despite his record of vicious attacks on conservatives. “In fact,” writes Burr, “reconciliation is at the heart of everything Savage writes and says”: 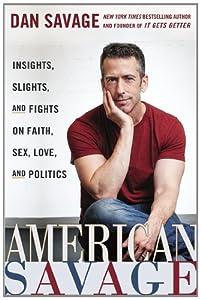 Unsurprisingly, Savage has a reputation as a bomb thrower. “American Savage” shows why that perception is surprisingly misleading....

The opening chapter, “At a Loss,” is about leaving and then returning — in a sense — to the Catholic Church. Savage uses his journey as a way to comment on his own spiritual life in terms that are refreshingly tender and sincere. “I transferred to a public high school and stopped going to church,” he says. “Then my mother died.” Yes, he eviscerates the church’s hypocrisy, but his message is palpably moral, and his story is ultimately about reconciliation.

Similarly, the chapter “My Son Comes Out” is overtly about how stupid it is to think that homosexuality is a “lifestyle” instead of a sexual orientation people are born with, like their handedness. “Anti-gay bigots argue that being gay is a sinful choice that gay people make because our parades look like so much fun.” Underneath, however, is a love letter to the traditional family of two parents + children. The baby whom Savage and his partner adopted is now 15, opinionated and heterosexual.

In “The GGG Spot” (“good, giving and game” in bed), he takes on Maggie Gallagher, a leader in the fight against marriage equality. Gallagher claims Savage is attacking conventional structures such as monogamy and marriage, but Savage fires back: “Gallagher isn’t serious about strengthening the institution of marriage.” Rather than shaming people and encouraging them to bury their desires, Savage recommends openness and accommodation [and cheating] — for the sake of stable families. “When people are happy with their spouses, when their needs are being met,” he writes, “they’re less likely to cheat, less likely to divorce, and less likely to turn their children’s lives upside down.”

Any reader of Savage's sex writing knows he thinks a little cheating is what somehow sustains (not mocks) monogamy. Burr began his review in the Post by praising Savage's candor about cheating: “My husband Terry and I are mostly monogamous. . . . There are times — certain set and limited circumstances — when it is permissible for us to have sex with others.” This is why "gay marriage" can appear in quotes when Dan Savage favors it. Burr concluded:

In fact, reconciliation is at the heart of everything Savage writes and says. He’s not throwing bombs at all. Or rather, if he is, they are bombs aimed at shaking up small minds to extend traditional institutions to people considered outside them. Beneath its often caustic wit, “American Savage” is on a healing mission. It’s about unification.

The Post doesn't apparently require its book reviewers to read the book in question -- or at least acknowledge what's in it. You don’t have to go too far in the publisher’s online excerpt to find him condemning the Family Research Council as an “anti-gay hate group” and its leader Tony Perkins as “full of s–t.” He laments the religious right this way:

Whenever someone asks me why the United States is such a mess about sex and everything that touches on sex—why the United States, out of all Western industrialized nations, will never stop fighting about abortion, sex education, birth control, the sex lives of politicians, the existence of gay people—I shrug and say, “Canada got the French, Australia got the convicts, the United States got the Puritans.”

Can’t you feel the healing and reconciliation?