If today's gun control debate seems a bit stale to you, you're not wrong. Twelve years ago, MRC's Geoffrey Dickens wrote a Special Report on network coverage of gun controversies over a two-year period from July 1997 to June 1999.

ABC, CBS, and NBC harped on several major themes in their coverage of gun policy stories. The arguments most commonly advanced by the network stars had one thought in common: guns are the problem. Check out just how similar yesterday's complaints were to today's: 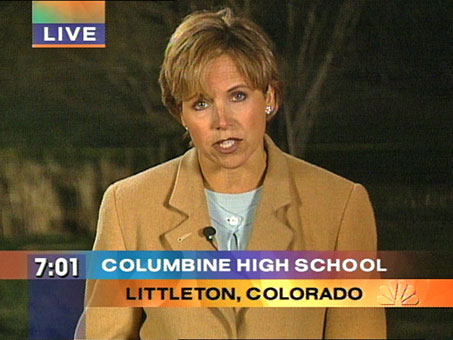 1. "Access to guns leads to shootings." The instinctive network approach focused more on the weapons than on the shooters. The day after the Columbine High School shooting, Katie Couric flew in to ask Colorado Governor Bill Owens outside the school: "A lot of people are asking about the accessibility of guns. Have you wondered about that yourself?"

Network anchors didn’t just single out guns, but a permissive "gun culture" as the culprit. After the Jonesboro, Arkansas shooting, Couric asked Arkansas Governor Mike Huckabee on March 26, 1998: "Are you a proponent of the theory that somehow the fact that these school shootings have taken place in the South is indicative of a southern culture that, that might, I don’t know, be more permissive of this kind of activity or somehow encouraged by the acceptance of guns and hunting?"

2. "Concealed weapons laws will only increase the carnage." Another liberal argument advanced by the media is that passage of concealed weapons laws will equal more violence in the streets. But it was a responsible gun owner, assistant principal Joel Myrick, who went to his car to grab a gun to stop the Pearl, Mississippi shooter. How many networks told the stirring story of Myrick’s heroic defense of his students with a firearm? Just one. NBC mentioned it twice, in an October 2, 1997 NBC Nightly News story and an interview with Myrick on the October 3, 1997 Today show.

On the day after the Columbine killings, ABC’s Charlie Gibson asked Colorado Governor Bill Owens: "There is irony in this state. Right as this happens, the state legislature is debating a bill that would permit citizens of Colorado to carry concealed weapons. That’s a bill that you support or have supported and said you would sign. Does this change your mind? Does it change the political landscape? Does it now seem terribly ill-advised?"

In states that passed concealed-weapon laws, crime has decreased dramatically. Professors John Lott and David B. Mustard of the University of Chicago found that network reporters were pushing a liberal myth: "When state concealed handgun laws went into effect in a county, murders fell by 8.5 percent, and rapes and aggravated assaults fell by five percent and seven percent." [More Guns, Less Crime, John R. Lott, Jr., University of Chicago Press, 1998.]

3. "Gun makers are responsible for violence." When the gun control debate shifted from Congress to the courts with lawsuits against gun manufacturers, the media again shifted blame, this time from the criminals to the gun makers.

On February 12, 1999, Good Morning America co-host Charles Gibson hailed a victorious "landmark" ruling: "Late yesterday, the growing drive to hold gunmakers to account for the way their products are used had its first victory in a federal court in New York City. Both sides are saying this is just the beginning. And there is no doubt that in the end, communities across the nation will be touched by the debate. ABC’s Terry Moran has more on the landmark ruling."

Moran elaborated: "It is the moment every mother dreads and this mother will never forget. After her 18-year-old son, Damon, was gunned down in an elevator, Andrea Slade Lewis joined six other victims and sued 25 gun manufacturers to hold them responsible for, as one lawyer put it, dumping guns like toxic waste into the market."

Reporters overlooked the point that in product liability lawsuits, the plaintiffs have to prove that the product was defective or not used as it was intended. The guns did not malfunction, but performed the way they were designed. The problem came in the criminal intent behind the gun. The lawsuits also ignored the beneficial uses of guns like self-defense.

These points were made by gun-rights spokesmen but rarely were made by reporters. Out of 47 stories on the lawsuits, reporters mentioned one of the above points in only ten. Of the 47 stories, 33 of them were slanted against gun manufacturers, only two in favor of them, and 12 were neutral. ABC ran the greatest number of stories on the lawsuits with 20, followed by NBC with 12 stories, and six on both CNN and CBS. NBC was the most biased, with 10 of their 12 stories favoring the lawsuits. (The other two were neutral.) ABC closely followed with 15 of their 20 stories aimed against gun manufacturers, and five neutral ones. On CNN, five stories leaned in favored the lawsuits, three were neutral, and just one tilted against a lawsuit. CBS broadcast three stories promoting the lawsuits, two neutral, and just one against.

4. "Will Congress waste the momentum we created toward gun control?" All of this gun coverage led to a climate on Capitol Hill that something had to be done about guns or else congressmen, specifically Republican congressmen, would feel it at the polls next year. And once public officials started debating the issue, reporters were there to egg them on. There was no more blatant example of this than the following exchange between Charlie Gibson and President Clinton on June 4.

Gibson pleaded: "When you went to Littleton, a friend of yours, who supports you on gun control, said to me in the last 48 hours, the President, because as he said Littleton has seared the national conscience, the President had a chance to roar on gun control and he meowed, and that was a friend of yours. There are very basic measures that could be taken that people agree on. We register every automobile in America. We don’t register guns. That’s a step that would make a difference."

Gibson offered liberal solutions to the President: "But let me come back to you on that, the polls, I agree on that, the polls have shown that this country would accept registration of firearms and yet we don’t do that and we’re not fighting about regulation of guns. We regulate every other consumer product out there." After the President warned that many Democrats who voted for gun control were defeated in 1994, Gibson feared that NRA members, and not the press, were setting the agenda: "But hasn’t the NRA won the debate at that point? Once we say it‘s politically impossible, we can’t do it, we won’t propose it, hasn’t the NRA basically framed the debate at that point?"

Over on NBC, Today co-host Matt Lauer echoed Gibson’s lament that a golden opportunity to regulate guns was being wasted when he asked liberal Congresswoman Carolyn McCarthy (D-N.Y.) on June 16: "There is some fear among some people that now that school is out, and parents aren’t sending their children off into what they may view as harm’s way every day, that there’s gonna be some momentum lost on gun control. Do you agree with that?" Lauer’s Today show colleague Ann Curry also wondered where the media-generated momentum went in an interview with the Heritage Foundation’s Marshall Wittman on June 21: "But didn’t the public cry out for more gun control after the shootings, the tragedy, the massacre in Littleton, and what happened to the momentum that was building when this was before the Senate?"