Forget Abortion! NPR Promotes The 'Rights' and 'Souls' of Plants

As liberal reporters obsess and nearly faint in the waning days of the campaign that conservatives would dare to assert a right to life for a human being conceived in rape, NPR.org offers a better idea: Plants deserve rights. The NPR headline: “Recognizing the Right of Plants to Evolve.”

Unborn babies have no rights...unlike the sensitive weeds in your garden? Pro-choice, but anti-chili pepper? 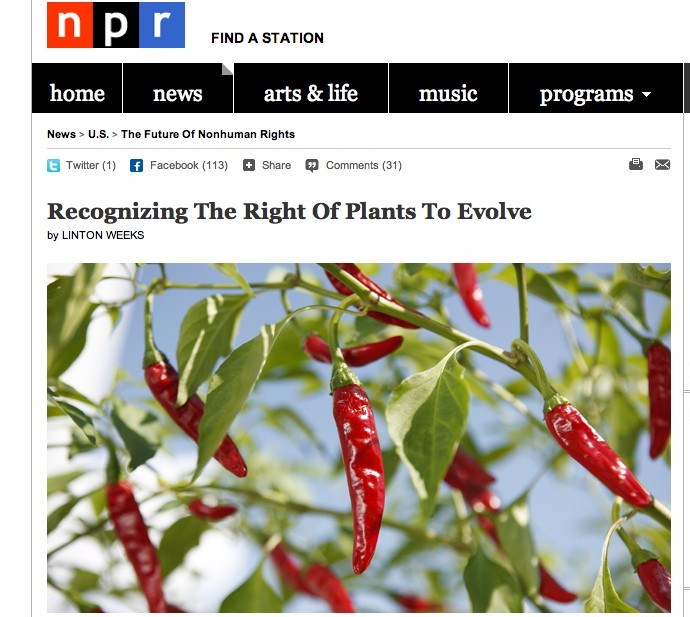 Linton Weeks never mentioned abortion in this philosophical exploration as he began:

If proposals calling for rights for animals are on the table, why not rights for other living things? Plants, for instance.

After all, plants can sometimes exhibit humanlike behavior. And we're not just talking about the butterwort-flytrap hybrid in The Little Shop of Horrors. Some plants respond well to music. Some "smell" other plants. Still others seem to shrink away when touched.

Plants display remedial types of memory and possess "anoetic consciousness" — the ability of an organism to sense and to react to stimulation — writes Daniel Chamovitz in his 2012 book, What a Plant Knows: A Field Guide to the Senses.

And, according to. recent reports from a research team led by Australian biologist Monica Gagliano, some plants (such as chili peppers) may be able to "hear" other plants (such as sweet fennel).

In other words, Terri Schiavo isn't worth saving because she's a vegetable, but Emancipate the Vegetables?

Weeks did allow the plant-rights people to be rebutted by the animal-rights people (who must not be happy to be told that Pea Soup is Murder), but it was strictly a left vs. left discussion. The bizarre argument continued:

Writing in The New York Times recently, Michael Marder, author of the forthcoming Plant-Thinking: A Philosophy of Vegetal Life, calls for "plant liberation." Plant stress, Marder points out, does not reach the same intensity, nor does it express itself in the same ways, as animal suffering. This fact, he adds, should be reflected in our practical ethics.

But, he continues, "the commendable desire to ameliorate the condition of animals, currently treated as though they were meat-generating machines, does not justify strategic argumentation in favor of the indiscriminate consumption of plants. The same logic ultimately submits to total instrumentalization the bodies of plants, animals and humans by setting them over and against an abstract and rational mind."

Therefore, he concludes, "the struggles for the emancipation of all instrumentalized living beings should be fought on a common front."

On the New York Times website, Marder tried to respond to critics of an earlier article in April, puckishly titled "If Peas Can Talk, Should We Eat Them?” Marder would not argue that you can’t eat plants -- even as he wants them "emancipated" just like the animal-rights movement --  but he would (like a good leftist) argue that the plants shouldn’t be left to multinational corporations to exploit:

It is especially pernicious to grow plants from sterile seeds, already robbed of their reproductive potential, patented and appropriated by profit-driven enterprises. Not only do these agricultural “innovations” harm farmers, who are forced to buy seeds from multinational corporations, but they also violate the capacity for reproduction at the core of the Aristotelian vegetal soul.

That's odd. NPR liberals not only favor multinational companies "robbing the reproductive potential" of humans through contraceptives -- they demand taxpayer-subsidized "access" to these corporate products.

Weeks even promoted groups that promote the rights of greenery:

The Community Environmental Legal Defense Fund argues that greenery does have interests — and rights. The Pennsylvania-based nonprofit works with communities around the world to "craft and adopt new laws that change the status of natural communities and ecosystems from being regarded as property under the law to being recognized as rights-bearing entities."

Establishing a legal system in which natural communities and ecosystems have an inalienable right to exist and flourish, says Mari Margil of CELDF, "places the highest societal value on those natural systems and communities."

In the past few years there has been a flurry of international interest in a plant rights movement. The New York Times reported in 2008 that Ecuador became the first country to provide constitutional rights to plants, granting nature "the right to the maintenance and regeneration of its vital cycles, structure, functions and evolutionary processes." That same year, a Swiss ethics panel advocated protecting plants' "reproductive ability."

Speaking recently in Hawaii, the Dalai Lama said that every living thing, including a tree or a plant, has the right to survive.

Then that would be an update: The New York Times found the Dalai Lama suggesting aborting mentally disabled humans is ethical.