NPR aired yet another attack on the Christian right on Thursday's Tell Me More. Michel Martin interviewed Democrat activist and author Michael Sean Winters about his new book "God's Right Hand: How Jerry Falwell Made God a Republican and Baptized the Religious Right." The headline for this interview on NPR.org was "Party Of Reagan? No, Party Of Falwell, Writer Says ."

Martin drew out the harshest criticisms of Jerry Falwell, that he turned moderate Republicans into "Judas figures" and forced less conservative Christians to abandon Christianity altogether because they didn't want to be associated with Falwell's "fundamentalist cast of mind." At NPR, left-wing secular fundamentalists are never questioned as coarseners of American politics, but conservative Christians are accused:

MICHEL MARTIN: I think fair-minded people would praise his accomplishments in terms of, you know, creating a viable conservative base for the Republican Party, energizing of voting block, encouraging more people to be engaged in the civic life of their country. But you also note, at the end of the day you think Falwell's efforts were ultimately bad for politics and bad for religion. And that's a pretty harsh assessment. I'd like to ask why you arrived there. 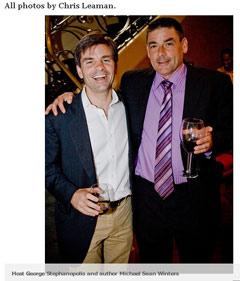 MICHAEL SEAN WINTERS: I think it was bad for politics because he still brought that fundamentalist cast of mind with him. Twenty, 30 years ago, if those of us in the progressive community were arguing to raise the minimum wage, we had on the opposite side the National Association of Manufacturers, and they were opposed to raising the minimum wage because it meant more money out of their pockets. It was simply about interest. Today, it's about ideology that really has coarsened the debate and may compromise less likely. The reason...

WINTERS: Oh, absolutely. And so if you are a moderate Republican now, you're not just a, you know, you're a Judas figure.

MARTIN: You say that the fastest growing religion in the U.S. is the religion of none. And you argue that the public image that he created and promoted has contributed a great deal to the growing numbers of people in this country who don't want anything to do with organized religion. Again, that's a very damning assessment. Why do you arrive there?

WINTERS: Well, I think - you know, when you conflate religion which has, you know, deals with the ultimate life questions into this kind of, you know, handy political card of how you should vote. When people that have questions about the politics and decide they don't like your politics, they're going to throw the political baby out with the baptismal water. You know, you need to have some mediating philosophies and mediating institutions between religion and politics, to make sure that they're kept separate.

The whole purpose of the Moral Majority was to conflate those in ways, and again, because of this fundamentalist mindset, often in very simplistic ways. And so when people said, you know, well, I just don't want to have anything to do with his politics, they almost felt they then had to abandon Christianity, because this is what Christianity had become in their mind. And I think he's very much responsible for that.