MSNBC's 'Morning Joe' Skips Any Talk to Guests About James Lee; Al Gore Mentioned at 6 AM 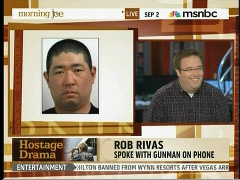 MSNBC’s Morning Joe seemed to be trying very hard to avoid the Discovery Channel hostage incident on Thursday morning -- even though NBC had the exclusive of speaking with hostage-taker James Jay Lee before he was shot. With Willie Geist and Chris Jansing guest-hosting the show, they talked a lot about Middle East peace negotiations, and Hurricane Earl, and sinking Democratic midterm prospects, and even anonymously sourced hit jobs against alleged serial liar Sarah Palin in Vanity Fair. In the whole three hours, they never blabbed with guests about James Lee’s inspirational figures or his ultra-left website weirdness.

The subject only came up about six minutes into the 6 am hour, before a Tom Costello news report. Jansing relayed: “Disturbing details are emerging about that gunman who was shot and killed yesterday after holding three people hostage at the Discovery Channel’s headquarters in Maryland. Court records show the 43-year-old, identified as James Jay Lee, was a radical environmentalist who said he experienced quote, 'an awakening' when he watched former Vice President Al Gore's documentary An Inconvenient Truth. In a manifesto Lee wrote, he also railed against shows like Kate Plus Eight for encouraging the birth rate [of] quote, “parasitic human infants.”

At 7:30, after another airing of the Costello report, Geist and Jansing talked to NBC News producer Rob Rivas, but even as Rivas vaguely mentioned the Lee manifesto, the hosts stepped right around any loose talk about Lee’s eco-inspirations:

GEIST: First of all, how did you get the guy on the horn?

RIVAS: Well, we had initial reports of some kind of situation at the Discovery Channel but nothing confirmed so as part of our standard operating procedure, we started calling authorities and one of the places we happened to call was the discovery channel and in the course of making that conversation, he answered the phone.

GEIST: He answered the phone.

CHRIS JANSING: I mean, what goes through your mind? You're calling to get a confirmation presumably from somebody who works in public relations for discovery and next thing you know, you have a potentially volatile situation on your hands.

RIVAS: Well, absolutely, and you know, as soon as we found out that to the best of our knowledge this was, in fact, the gentleman who was making threats against the building, we contacted the police immediately, and we just -- I did my best just to keep him on the line. I figured if he was talking to me, he wasn't doing anything else in the building, hopefully.

MIKE BARNICLE: When did you realize that you were talking to the suspect?

RIVAS: Well, he sounded like an individual when we called the facility that didn't belong there. He seemed a little bit anxious and he identified himself right away as the gentleman who was, in fact, you know, wearing a device.

BARNICLE: There was a very good line of inquiry, just in the clips that we played. How did you get there with the questions? It was very good.

RIVAS: Well, you know, you never want to be part of the story. I just wanted to get as much information that was pertinent to hopefully report it in the future, but also you want to keep him talking. He was very actively promoting his website, which was sort of a manifesto, if you will, of several bullet points. So at the same time we were asking him questions, we were reading the website where we could go next with the questioning, primarily just to keep him on the line.

That was the obvious place to shift to the politics, but MSNBC wasn’t going there.

GEIST: How long did you keep him on the phone? How long was the call?

JANSING: Did he hang upon you ?

RIVAS: He did. He got another phone call or a phone rang in the background and he dropped off of our line.

GEIST: And at what stage of the crisis was this? Was this early on? Was this right before he was shot, or where was this?

RIVAS: This was several hours before he was shot. I believe the police or someone was trying to get in contact with him because it probably continued another three hours before it ended.

Mike Barnicle strangely thought of the human connection between reporter and eco-terrorist, but Rivas admirably shifted the sympathy back to the innocent folks:

RIVAS: It's surreal, and I'm just glad nobody in the building, none of the innocent folks were hurt.

GEIST: Rob, you did a great job on the phone, keeping him on the line. Good questions. Thanks for coming in to tell us about it.

Rivas might not have been the first choice for windy analysis of the Big Picture. But it's fascinating that MSNBC can do entire one-hour Chris Matthews specials about the frightening, impending dangers of right-wing rhetoric, and then go all silent when the threats and violence emerge from the other side of the ideological fence.