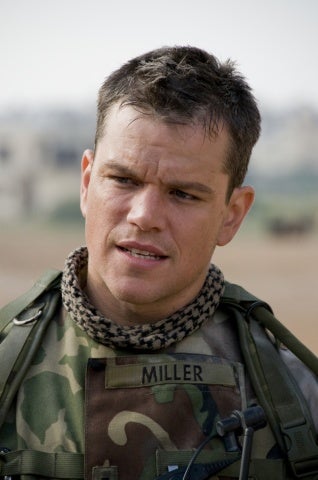 I can't believe what I just saw, so I'll think about it some more before I go into detail. But if I were the kind of excitable guy who believes in boycotts, I'd say "Boycott NBC Universal" for its appalling new anti-American flick "Green Zone," an absurdly awful would-be actioner that stars Matt Damon as a US warrant officer in 2003 Baghdad.

I would never have accused director Paul Greengrass, who made the astonishingly powerful "United 93," of being simplistic. But he has made a $100 million war film in which American troops are the bad guys. There are moments that we're supposed to cheer because our soldiers are getting shot down -- but it's okay because they're evildoers at worst or stooges at best who are trying to kill the one guy in the country who can prevent an insurgency from taking root.

The movie also makes it look as though the flawed intelligence about the war was traceable to a single smarmy jackass (played by Greg Kinnear) working in Pentagon intel who fabricated WMD intelligence, said it came from a mysterious source (a general in Saddam's army code-named "Magellan"), planted that intel with a Judith Miller-like reporter (Amy Ryan - who, hilariously, is shown working for The Wall Street Journal rather than The New York Times because Hollywood liberals can't accept that The Times ever gets anything wrong) and then, when his ruse began to be suspected, sent his henchmen out to kill the general, who was willing to deal with the Americans but who vowed to launch an insurgency campaign if the Americans didn't live up to their promises. In other words, the U.S. wasn't merely incompetent - it caused the insurgency to occur.

Orlando Parfitt of IGN UK thought the movie was exciting and entertaining, but the politics were shallow and heavy-handed:

Early on Matt Damon's character doesn't question why America invaded Iraq. But as the story goes on and he delves further into the conspiracy, Miller ends up virtually going to war with the American army and protecting a ruthless former Ba'ath party general who represents - the film suggests - a preferable alternative as rulers of Iraq to the US government. It's just the first of several plot developments that - along with some extremely heavy-handed dialogue - reinforces the movie's implicitly anti-American stance in a way that isn't particulary subtle.

The problem with taking such a highly opinionated approach is that most of the film is fictitious. Green Zone recalls moments we can all remember seeing on the news (we see snippets of speeches made by George Bush for example). However the bones of the plot - Miller's investigation into the complex web of fabrication that lead the US to believe Saddam Hussein had WMDs - is almost entirely made up; dreamt up by screenwriter Brian Helgeland.

It's an approach that undermines the entire argument. Green Zone uses evidence from its invented thriller plot to damn the real-life American government.