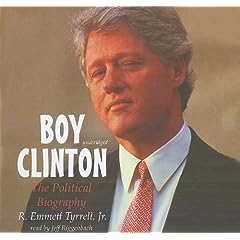 ABC reporter Jonathan Karl reviewed Ken Gormley's huge 789-page Clinton-scandal book The Death of American Virtue for The Wall Street Journal on Tuesday. Karl played no favorites among the actors in the impeachment drama, but the review made clear that Bill Clinton stood out for his never-ending bitterness against conservatives:

Mr. Gormley interviewed the former president three times in 2004-05 and found a man still seething at the vast right-wing conspiracy that he blames for bringing the stain of impeachment to his presidency. "They're on a crusade," Mr. Clinton says. "God has ordained them to crush the infidels. . . . Ken Starr was their errand boy, and he danced to their tune, just as hard as he could dance."

Crush the infidels? Was Clinton trying to make his critics sound like Islamic jihadis?

About the House Republicans who led the drive to impeach him Mr. Clinton is even harsher. "They ran a partisan hit job run by a bitter right-winger, Henry Hyde," Mr. Clinton says. "Yeah, I will always have an asterisk after my name, but I hope I'll have two asterisks: one is 'they impeached him,' and the other is 'He stood up to them and beat them. And he beat them like a yard dog.' "

That wasn't Clinton's only animal metaphor. He also told Gormley the story was a lot like a classic Warner Bros. cartoon. "I felt they were Wile E. Coyote in the pack and I was the Road Runner."

Some might be proud of Clinton's "resilience." Others will be disgusted that both Clintons lied their faces off for more than half a year to try and escape the weight of the truth about Lewinsky. Clinton also loathes the Supreme Court ruling that the Paula Jones sexual harassment suit could proceed during his presidency:

Mr. Clinton is still bitter about the ruling, calling it "one of the most naive decisions in the history of the Supreme Court." Justice John Paul Stevens, the liberal stalwart on the court, disagrees, saying that the problem was Mr. Clinton's own behavior. "I never had the slightest regret about a single word of the opinion," Justice Stevens tells Mr. Gormley. "I wouldn't change a word."

The most interesting historical finding in Karl's review is one of Starr's prosecutors objecting to how the Lewinsky probe took the heat off Hillary Clinton for her Arkansas legal sheananigans:

Perhaps nobody opposed expanding the investigation more than Mr. Starr's deputy Hickman Ewing, who was running the independent counsel's Little Rock office and felt that Hillary Clinton had a lot to answer for. "In Ewing's eyes, Mrs. Clinton had lied to the [Office of Independent Counsel], had lied to the grand jury, and would keep lying until the cows came home if she was not brought to justice," Mr. Gormley writes.

Mr. Hickman even drafted an indictment of Mrs. Clinton for conspiracy to conceal her true relationship with the Madison Guaranty S&L in order to "avoid and evade political, criminal and civil liability, fraudulently secure additional income for the Rose Law Firm and safeguard the political campaigns of William Jefferson Clinton." But with the turn to Ms. Lewinsky, that investigation was over. As Mr. Ewing put it: "Monica saved Hillary."