Why Hasn't Obama Had a White House Press Conference Since July? 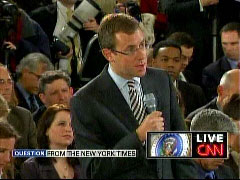 Still, a press corps that periodically complained about George W. Bush's infrequent news conferences should not let Obama walk away from the practice unchallenged. And some of its members have protested. [CBS’s Chip] Reid raised the issue with Gibbs at a briefing last month, and Hearst columnist Helen Thomas said the president has "gone an obscenely long time, not holding one."

Gibbs responded to Reid by saying that the last time the subject came up, "you all, to a person, reminded me of our dramatic overexposure."

That's not to say the White House press conference is a nasty trip down a dark alley, with questions like New York Times reporter Jeff Zeleny's "what enchanted you at 100 days" softball. But Obama's slide in the polls has made him wary of full engagement. Kurtz chided:

But while the administration may view televised news conferences as very 20th century -- Jack Kennedy began the practice in 1961 -- it remains a valuable tradition. It would be ironic if the president who seemed to win over the media while running for office were to wind up stiff-arming those who cover him most closely.

Kurtz found several network reporters were eager for another round (although their bosses might not want another one in prime time, especially during February sweeps):

"It's a source of great frustration here," says Chip Reid, CBS's White House correspondent. "It's important for us to hold the president's feet to the fire."

NBC White House reporter Chuck Todd calls the situation a "shame," saying the administration is trying to control the message rather than allowing Obama to be seen "unscripted."

The White House folks may be worried that Obama "unscripted" can often sound bumbling and incoherent, which doesn't match their carefully manufactured Calm Intellectual media image.