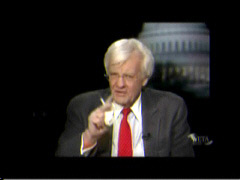 Former Wall Street Journal editor Al Hunt (now with Bloomberg News) expressed grave pessimism about the Democrats on PBS’s Charlie Rose show Wednesday night, to the point where he said they need to jam through a health bill, or lose the House.

DAVID BROOKS: That`s not the message though I heard from the speech. I heard the "Let's go gently into the good night."

HUNT: If that happens, David, I guarantee the Republicans will win the House of Representatives.

The talk even shifted – on PBS, the supposedly urbane network -- to "tea baggers" ruining the Republican brand:

HUNT: Charlie, I agree with David. If parties were stocks, I would buy Republicans right now big time and then I would sell about October 20th, because they are going to have a banner year this year.

But I`ll tell you something, their base is far more injurious to them as a governing party than the Democratic base was 20 years ago, and that was god awful, as Jim Fallows knows. But they`re going to be -- a majority of Senate Republicans are going to vote against Ben Bernanke, and they’re going to do it because they`re worried about the tea baggers. John McCain, a normally sensible man, is doing all sorts of things because of the fear of that base, and that`s a real long-term problem.

CHARLIE ROSE: We’re 50 minutes into this conversation, this global conversation, and that`s the first time anybody has either mentioned tea party or tea baggers.

JAMES FALLOWS: And it wasn't from New York, I`ll say that on behalf of your city.

This predicted ascendancy of conservative Republicans is making David Brooks distraught that his brand of "progressive conservatism" is going to have to wait. After some jokes about British Tory leader David Cameron being his kind of conservative – Hunt joked "You don’t have to jump off the balcony, David" – Brooks expressed his hope that the GOP would eventually locate the sensible center:

I have to go 3,000 miles to find another conservative I agree with. David Cameron is far ahead of where I think the Republican Party needs to be. The Tories have had their three election defeats. It took them a while to get out from under the shadow of Margaret Thatcher, but they`ve done it.

And that`s what you were talking about with his views on finance. And they talk about things conservatives aren`t normally used the talking about, love and things like that. You do that around here and they look at you like you’re Oprah.

But he does it in a very good and very substantive way. And so I think that’s where Republicans need to go, but I now think it`s going to take 10 or 15 years to get there because they’re going to have a good November preaching the very limited Barry Goldwater type of Republicanism. And you know, Barack Obama will come back and win in 2012.