Another CNN Anchor Comes In Third on Celebrity 'Jeopardy' 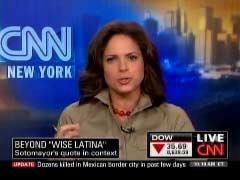 The New York Post reported "CNN should consider banning its anchors from appearing on ‘Celebrity Jeopardy’ after the humiliating defeats of Wolf Blitzer and Soledad O'Brien." O’Brien came in third behind a comedian and a basketball legend:

This month, it was O’Brien’s turn against NBA legend Kareem Abdul Jabbar and Michael McKean, of "Spinal Tap," "Laverne & Shirley" and "Saturday Night Live." McKean, a previous winner, ended with $24,800, followed by Abdul Jabbar with $8,800 and O'Brien with $6,200.

A CNN insider defended the journalists: "They are reporters, not trivia experts. And the buzzer is complicated. It's not activated until Alex [Trebek] finishes the last syllable of the question. If you hit the button too soon, nothing happens."

....Wolf was blitzed last month, coming in last with minus-$4,600, behind comic Andy Richter, a past winner who racked up $68,000 for charity. "Desperate Housewives" star Dana Delany came in second.

Matthew Balan, MRC's CNN-watcher, joked that perhaps there's a new prime-time quiz show to be made: "Are You Smarter Than a CNN Anchor?"