On PBS, Charlie Rose Pushed the Hardest Hogwash on Teddy 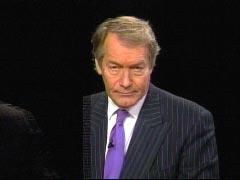 The Charlie Rose show on PBS was a natural place to get the warmest, most exaggerated praise for Ted Kennedy on the night after his death was announced, on August 26. Doris Kearns Goodwin, one of the networks’ favorite pundits, declared he was "an unparalleled giant in history." Rose said his record was a "towering, towering achievement, far beyond many presidents." Newsweek editor Jon Meacham was placing him in a tiny Senate Hall of Fame: "Henry Clay, Daniel Webster, Ted Kennedy." After that, he said, a huge dropoff in talent.

Al Hunt was the strangest, but at least he began to realize his exaggeration was too implausible to continue: "He didn't demonize people at all. He demonized positions, but not people. Bob Bork might have been a rare exception of that."

Here are a few snippets of the conversation:

DORIS KEARNS GOODWIN: Obviously, he went through difficult times. I keep thinking about him in the Hemingway quote. "The world breaks everyone," Hemingway once wrote. "But afterward, many are strong at the broken places." And how true for Teddy Kennedy -- broken by fate of losing those three brothers and a sister before he reached his mid-30s; broken by acts of his own making, by the drinking and the womanizing and Chappaquiddick -- and yet he returned to the Senate after that failed 1980 run and found a home. And the legacy that he leaves there, I think, makes him an unparalleled giant in history.

CHARLIE ROSE: ....Well, when you look at the impact he`s -- his legislation, there are 50 pages of his legislative accomplishments and 2,500 significant pieces of legislation. When you think about the impact that that can have on individual lives, it`s a towering, towering achievement, far beyond many presidents.

DORIS KEARNS GOODWIN: Absolutely far beyond any presidents. I mean, that`s the thing. The kind of movement towards social justice that he was able to bring about from the legislation that he championed really has affected the way people live. The way they live in their communities, the jobs they have, the chance they have to be with their families when somebody gets sick with his medical leave thing. Those are huge impacts on people`s daily lives.

ROSE: In history, where do we put this person?

JON MEACHAM, EDITOR, NEWSWEEK: One of the two or three senators who will be remembered forever. Henry Clay, Daniel Webster, Ted Kennedy. I think that it gets -- there's quite a drop-off there, quite a falling-off there, as Hamlet would say.

....He was someone who had a work ethic that it quite at odds with the caricature of a very rich man sailing around and probably drinking a little too much. And not being the -- he does have the reputation for the work-horse qualities that I think he deserves. There are very few examples, it seems to me, in American politics ever of the distance between the caricature of someone and the reality. He was seen as an unreconstructed, unflinching New Deal liberal. He was, as Al was just saying, one of the great compromisers. Always wanted to get something and then try to make it better later, which belies that caricature.

And was someone who saw past the traditional ideological labels that people wore. I think -- and like Churchill, in a way -- I think because he always understood that this morning's enemy might be tonight's ally. And if you grew up in a legislative body. You build coalitions from issue to issue. So you really can't afford, if you were going to be a master legislator, to cut people off on one issue, because you're probably going to need him in two hours on something else.

AL HUNT: ...George W. Bush, who had very few relationships with any Democrats in this town for eight years, would in private talk with -- would regale people with what a great legislator and what a great ally he thought Edward M. Kennedy was. I don't know of any other Democratic senator that he's spoken in those terms.

ROSE....There is this on his wall in his Senate office. I asked him to talk about it, and he did, in one of two interviews I did. One in 2005 and one in 2007. Trent Lott wrote him a letter. Basically said, "Dear Ted, if they only knew you the way we do." What did he mean by that, Al?

AL HUNT: Well, that he was -- he was delightful company. Everyone loved to be around him. He`s a guy that, as we discussed the last few minutes of this show, who could compromise. He was not unreasonable. He didn't -- he didn't demonize people at all. He demonized positions, but not people. Bob Bork might have been a rare exception of that.