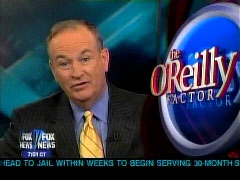 MediaWeek magazine writer Mike Shields is attacking Bill O’Reilly as "un-American" and "downright offensive" for suggesting liberal newspapers are "out of touch" and reporters will soon be "out of work." (One example is a January 28 column.) Shields accused O’Reilly of "cheerleading the downfall" of the newspaper industry:

There’s another interesting aspect to O’Reilly’s anti-newspaper diatribe. During this horrid economic cycle, when millions of Americans are out of jobs and terrified about their future employment prospects, rooting for American businesses to go under seems way out of touch to me, especially for a commentator who’s constantly talking about sticking up for regular "folks." It kind of sounds, well, un-American.

But in O’Reilly’s view, this is the liberal elite getting what it deserves. The thing is, it’s pretty hard to be elite when you’re on unemployment or raising a family on a salary that’s been cut by 10 percent.

Bill, I’m suggesting you rethink your position here. You may not love the management at the SPI or the Times. You may even have a point regarding treatment of President Bush vs. President Obama. But was the guy who covered the Mariners for the SPI really a lefty communist who deserved to get canned? Were the junior reporters, and photo editors who worked at the Baltimore Sun, which just lost a third of its newsroom, too liberal in your estimation to participate in freedom of the press?

You are painting the media with a pretty broad brush here, and as someone who knows several out-of-work reporters, I find your attacks downright offensive. Plus, you still haven’t explained to me clearly why it’s not OK for a publication to lean left, if that’s what its readers want. Should grungy, crunchy Seattle have only a hard-right newspaper?

Fox News clearly leans toward the conservative point of view, and there’s absolutely nothing wrong with that. In fact, the network’s tremendous success proves that news organizations have missed a huge opportunity to serve this audience for years. So what if The New York Times’ political coverage leans left? Point it out. Disagree with it. But root for its destruction?

What other American industries do you want to die because their politics are not to your liking, or that of your boss, Roger Ailes? Who else do you want to see tossed out on the street?

Typically, the man from MediaWeek wants to deny that a strident liberal bias might be a factor in declining newspaper circulation:

O’Reilly’s theory for why these publications are in such deep trouble is because they have suddenly shifted radically left in their coverage, and readers are rejecting it. That’s why he’s happy.

That theory doesn’t sync with the thinking of most sensible people in the media who understand the industry is going through massive macro changes, and that many Americans—particularly the young—are permanently changing their reading habits away from newspapers and magazines. Not because of political leanings, mind you, but because the generally free technology of the Web trumps the tradition of carbon-based, physically distributed media every time.

Shields noted that all the major newspapers are seeing their online audience grow, which would counteract the notion of an unpopular media bias. He doesn’t seem to consider that conservatives would feel freer to go to the web sites of the Washington Post or New York Times for free – and do so knowing it’s not in any way subsidizing the liberal newspapers by subscribing.

Media outlets certainly don’t root for the average workers in the industries they don’t consider in the "public interest" – everything from tobacco to oil to coal to the makers of SUVs. In their own mythology, they're supposed to report "without fear or favor." So why can't media critics tell newspapers what might be ailing them?