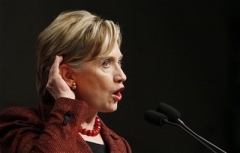 Who will cover this gaffe? In a story headlined "Tongue-Tied Clinton Gets Warm E.U. Welcome," Reuters reported that Hillary Clinton mispronounced several names and claimed American democracy’s been "around a lot longer than European democracy." Reporter David Brunnstrom tried to make excuses – she’s not gaffe-prone, just tuckered out:

Tiredness appeared to show Friday when she answered questions in front of 500 young Europeans at the European Parliament, where she was the highest-ranking U.S. visitor since the late U.S. President Ronald Reagan in 1985.

A veteran politician, Clinton compared the complex European political environment to that of the two-party U.S. system, before adding:

"I have never understood multiparty democracy. It is hard enough with two parties to come to any resolution, and I say this very respectfully, because I feel the same way about our own democracy, which has been around a lot longer than European democracy."

The remark provoked much headshaking in the parliament of a bloc that likes to trace back its democratic tradition thousands of years to the days of classical Greece.

One working lunch later with EU leaders, Clinton raised more eyebrows when she referred to EU foreign policy chief Javier Solana, who stood beside her, as "High Representative Solano."

Will Katie Couric and everyone else who tried to suggest Sarah Palin wasn't bright enough for the big jobs notice Hillary bumbling around and confessing (like a Couric) that "I have never understood parliamentary democracy"?

Will Tom Brokaw and the Today crew reconsider their declarations of her "mastery" of detail and her sizzling smarts?

Still, Clinton has been well received in Brussels, where the Obama administration has been viewed as a breath of fresh air after the unpopular leadership of George W. Bush. His secretary of state, Condoleezza Rice, often drew protests on her travels.