Omitted: Airman Tells Bush 'Next Time, Pick Up the Shoe and Throw It Back' 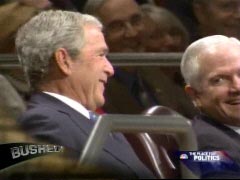 "Sir, nice to see that our President is still quick on his feet after eight years in office." (Laughter.) "Next time, pick up the shoe and throw it back." (Laughter and applause.) "We got your back." – Master Sergeant Michael Frazier, United States Air Force.

This ceremony was skipped over almost entirely by the news media, according to a quick Nexis check. One odd place it popped up: MSNBC's Countdown with Keith Olbermann, who ran the clip without the "We got your back" part. Olbermann quipped: "Boy, you know what, next time you can do what Vice President Cheney would do, and just re-enact the logic used in going into Iraq in the first place: use the thrown shoe as an excuse to invade Iran."

It was mentioned in the tenth paragraph of an Associated Press dispatch by Darlene Superville, which also skipped the "We got your back" part:

One entry, from a member of the Air Force, said: "Nice to see that our president is still quick on his feet after eight years in office. Next time, pick up the shoe and throw it back."

The reference was to the incident during Bush's visit to Iraq last month, when a correspondent for Al-Baghdadia television hurled his shoes at the president during a news conference.

Meanwhile, the Olber-maniacs of the American left are still celebrating their "solidarity" with the shoe-tosser over bloodthirsty Bush. The Raw Story blog finds an art gallery that opened this week in Ashland, Oregon:

City Councilman Eric Navickas and partner Amy Godard christened the MAda Shell Gallery on Jan. 2, and gave everyone who attended a chance to launch shoes dipped in red paint at a large portrait of outgoing President Bush....Godard added that he completely intends the interactive display to be a "statement of solidarity" with Muntadhar al-Zaidi, the Iraqi journalist who became famous the world over for throwing his shoes at Bush.

AP picked that up, too.