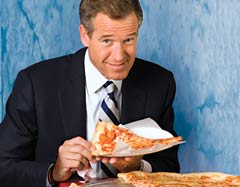 Despite his affection for that elitist Barack Obama, NBC Nightly News anchor Brian Williams is aggressively marketing his regular-Joe credentials again. He starred on the cover of Sunday’s Parade magazine insert in many newspapers across the country, illustrating "What America Eats." He declared on the cover, holding up a slice of pizza on a flimsy paper plate: "Ours is a country of great pizza joints."

Inside, the headline was "I’m Blissfully in Love With Food Courts," and he declared his love for Arby’s, Cracker Barrel, and Waffle House. So it might come as a surprise to Parade readers that Williams lives in one of New York’s swankiest addresses in Manhattan with the chic restaurant Le Cirque on the ground floor, which offers high priced cuisine like an appetizer of terrine of foie gras with Gewurtztraminer gelee for $38. "It’s better than having an Applebee’s in the lobby," he joked to the New York Observer in 2006.

Williams compared himself to a crack addict – on the subject of the odor wafting out of a Cinnabon: "Cinnabon exhaust fumes have a hold on me like crack cocaine would over an addict." Amusingly, Parade toned this down in its pull quote, in large type: "The scent of Cinnabon has a hold on me." Apparently, comparing Cinnabon to crack is not funny in Ma and Pa papers.

He added: "And when I'm on the road and see that friendly Arby's, Cracker Barrel, or Waffle House sign, it might as well read 'Brian, Welcome Home.'"

But if people thought there was phony populism when the RNC bought Sarah Palin fancy clothes from upscale New York stores, think about this: Parade readers would have no idea that Williams helped open the chic eatery Le Cirque on the first floor of his apartment building. Michael Calderone (now a media reporter for The Politico) wrote up the event in the New York Observer of May 28, 2006:

"It’s better than having an Applebee’s in the lobby," said Brian Williams, the NBC anchor who lives 34 stories above the restaurant Le Cirque, in the Bloomberg building at 58th Street and Lexington Avenue.

"Nothing against Applebee’s!" Mr. Williams added. He stood almost inch-deep in the restaurant’s plush crimson carpeting, next to a model of the building complex that had been somewhat crudely constructed from chocolate, never the perfect building material, as some 2,000 of his friends and neighbors – and a few strangers – milled about the restaurant at its opening party May 18.

The rest of the building provides the 700,000 square feet of office space that is home to Bloomberg LP, the Mayor’s financial-news service. In the bottom floors: Home Depot, Container Store, a children’s clothing boutique, H&M, consumer branches of Bank of America and Wachovia. Just another 21st-century middle-class tower on the good old Upper East Side.

For the Observer, Williams served up his fancy digs with dry irony and JFK supply-side economics slogans:

The glass windows of Le Cirque, which take up much of the curtain wall, are corrugated, as if even the pared-down decorative conceits of the restaurant were too flashy to be seen from the courtyard without some sort of muting. No circus here, please.

It’s only ironic that, entering the courtyard-cum-driveway at the center of the building and looking up at the top of the "ellipse" of glass wall above, one guest remarked: "It looks like you’re at the bottom of a toilet-bowl!"

But whatever else is true, the courtyard is memorable. It gives the visitor, even the resident, the vertiginous feeling of swirling down into the center of a drain, standing there.

"So much for the days of a lazy driveway and a sedate entrance," Mr. Williams had said. "It’s fantastic. A rising tide lifts all boats."

This kind of irony is only for the snootiest of locals. It would not fly with Williams for his mournful visits to hurricane-damaged New Orleans. So just how pricey is the anchorman’s apartment? You better be a multi-millionaire:

Earlier on the same day, Robby Browne, a real-estate broker with the Corcoran Group, walked through a penthouse unit at One Beacon Court, 55 stories above the ground. Of the 105 apartments in the building, which have ranged in price from around $2 to $27 million, this is the last apartment left to sell. Penthouse 55W costs $17 million.

One Beacon Court is the name given to the apartments at the top of the Bloomberg building. Since contracts were first signed in 2004, the building has gained a reputation, not unlike the AOL Time Warner Center, as a refuge for people with names: Williams, Knowles, Damon, Welch, Immelt. Someone will pay $17 million for 55W.

Mr. Brown pointed out of the enormous windows toward other buildings: the San Remo, the Empire State Building, the Plaza, its scaffolded girth just barely peeking out from behind the G.M. Building.

You can even see the Atlantic Ocean," Mr. Browne said, pointing into the distance.

The apartment measures 4,267 square feet, has 13-foot ceilings, a windowed eat-in kitchen, and large gallery. Its interior, as with all of the rest of them, was designed by the interior designer Jacques Grange, who has had commissions from Revlon chief Ron Lauder and fashion designer Yves Saint-Laurent.

The built-ins feature special drawers that can’t be slammed.

Mr. Browne was to show the apartment to a potential buyer a little later in the afternoon.

"Most of them could get into the best co-ops," said Mr. Browne of Beacon Court buyers. But the best coops don’t treat their residents like hotel guests, which is one of the great promises of the new breed of luxury apartment in Manhattan: 24-hour doorman, concierge, valet parking, fitness center, even a spacious room for business meetings with a large, flat-screen television.

"This is how a lot of people want to live now," Mr. Browne said.

The restaurant is seen as an amenity for the apartments. Though Mr. Williams said he planned to save dinners at Le Cirque for special occasions, it isn’t difficult to imagine Beyonce Knowles or Johnny Damon or Jeffrey Immelt organizing regular reservations, as Louise Sunshine has done for two nights of every week from the time the restaurant opens.

The Mayor was on hand during the May 18 opening party for Le Cirque, escorted by a tuxedo-clad [owner Sirio] Maccioni, grinning from ear to ear.

Martha Stewart, whose former personal chef serves as the executive chef at Le Cirque, was there. "I am a friend of the family and a long-time supporter of Sirio and his efforts," she said. She had gotten inside Le Cirque even before the opening party, having had a meal there with her daughter, Alexis, the previous Saturday night.

"I think the neighborhood just went up a notch," Brian Williams said.

This is quite a contrast from the Spaghetti-Os line spouted by Williams in Parade magazine. It began and ended with these lines:

I was not raised as an adventurous eater. My mother’s goulash was one can SpaghettiOs with one half-pound ground chuck. Mom’s goulash. I loved the international flavor of the name. I’m still often flummoxed by what to order in fancy restaurants. I think I’m like a lot of other people. I never learned to use chopsticks. I’ve never had Ethiopian or Korean food....

When I’m back home, I always do our family grocery shopping. I can make a list by aisle. I don’t like skim milk, so I buy 1%—that’s my little life protest. I’ve been married 22 years. When I met my wife, I drank whole milk. I’ve come down 3 whole percentage points.