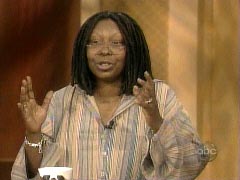 Editor's Note/Update: Whoopi's blog has since corrected the error listed below.

Who let Whoopi Goldberg blog without an editor? In her Wow-O-Wow blog post titled "Sarah Palin Is a Very Dangerous Woman," she lobs a wild pitch about the Alaskan Independence Party kerfuffle: "I also thought that this idea of America first coming from her was kind of strange because she was one of the people who wanted to succeed from the United States. She was part of a campaign to succeed Alaska from the United States of America." Where’s the editor to say "Sorry, dear, don't you mean ‘secede’?"

Whoopi’s article concluded by suggesting Gov. Palin's  speech reminded her of a German-American Nazi rally: "This girl is dangerous to me. This is a very dangerous woman, because I believe for her intents and purposes, she’s OK if everybody lives a certain way, that is to say, the way God ordained men and women to be. Well, already she’s breaking that because she’s the daddy. She’s going to run the country and the husband is going to take care of the kids. I just found the whole thing sad and very musty and very much like a Bund rally, but maybe that was just me."

The rest of the post was more predictable, with Whoopi associating conservative rhetoric with meanness and snideness:

I thought the speech in its body was energizing for Republicans, as I said, and sent them the message they wanted to hear, but what I heard was a lot of meanness and snideness and some inaccuracies and some dismissive talk to community organizers and other people’s adversities. She sort of mentioned the idea after Rudolph Giuliani did — and Rudolph Giuliani is a bonehead to start with, but that’s neither here nor there — but I thought once she began her discussion about community organizers and that they don’t have real responsibilities … I guess I can’t say I don’t know where she’s been living, because she’s been living in Alaska and maybe they don’t have community organizers there but they do in Chicago. Anyone who leaves their gig from school and goes to the people who most need help, that seems to me an admirable American way of thinking.