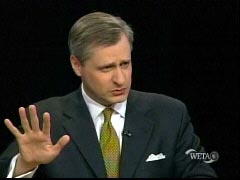 PBS can be satirized easily as the network where people display their satisfaction with their own intellectual sophistication, as opposed to those rubes who rely on other networks for their information. On Tuesday night’s Charlie Rose show, Newsweek editor Jon Meacham warned Rose to prepare for an anti-Obama onslaught in the wake of the Jeremiah Wright video clips, a gathering ‘partisan narrative’ from Republicans that is crude, xenophobic, and increasingly racialized. The new code word for Obama will be "exotic," code for black and foreign and perhaps Muslim.

Meacham, like many others, was wowed by the sophistication of the Obama speech. "I hope that translates," he said, because the Democrats are apparently the Party of Sophistication. "We should feel good about the country in the past few months because we've had a pretty serious political conversation about what we -- at least on the Democratic side -- about the nature of things. But it is sophisticated and it is nuanced," which means "most people" with simpler minds will just conclude "there's some crazy minister that Obama had to distance himself from who said these outrageous things."

The segment came about 38 minutes into the hour, and included this exchange:

ROSE: So he made the speech today. What’s the consequence?

MEACHAM: I think I agree with – I think the tactics are not great for him. If one wants to construct a partisan narrative against Senator Obama as being too exotic, I would get used to that word as a new code word.

ROSE: What does "exotic" mean as a code word?

ROSE: So you think it's a gathering narrative?

MEACHAM: Sure, sure. If you are running against a formidable African-American candidate, and you have a minister who has said ‘God Damn America, ’ and you have the videotapes, always dangerous [grins broadly], you have, I think there's a real risk that the campaign becomes increasingly racialized.

ROSE: Okay, but so Senator Obama, he steps forward and says, look, I have, he explains it as you suggested he did. He secondly says it's not my views. I didn't say this. I didn't even hear this!

MEACHAM: It’s interesting. There was one moment in the speech where he says did I hear things with which I disagreed, yes.

I hope that translates. I think actually we've had a very -- we should feel good about the country in the past few months because we've had a pretty serious political conversation about what we -- at least on the Democratic side -- about the nature of things. But it is sophisticated and it is nuanced. And most people, I think a lot of people will hear there's some crazy minister that Obama had to distance himself from who said these outrageous things. I think he did everything he could possibly do in this speech within the bounds of his conscience not to go too far. But politically I think we liked the speech. I think people who are interested in the history of these things will applaud, and rightly. But tactically, does this help him win Pennsylvania? I doubt it.