Clarence Thomas to Bloggers: Wish You'd Been Around in 1991! 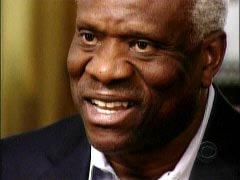 In my twentysomething days, one of the most infuriating, even sickening cases of media bias was something they inflicted on Clarence Thomas called "the Hill-Thomas hearings." That’s a very bland and generic description for a woman named Anita Hill trying to sabotage the Thomas nomination to the Supreme Court – first anonymously, and then on the record -- by telling wild and unproven stories about the judge’s lewd talk around her.

When I was invited to dine with Clarence and Virginia Thomas and an impressive crew of columnists and bloggers at the Heritage Foundation Monday night, I wasn’t sure what I would ask Justice Thomas if given the chance. I wanted to ask about the media, but Justice Thomas was very clear at the outset of his remarks about the media that’s supposed to know him best. He said "we’re not talking to the Supreme Court reporters." He said that would be like trying to train a pig. It would have been nice to raise Jeffrey Toobin’s forever-furious theories, but I didn’t.

The one Supreme Court reporter Thomas mentioned twice was Linda Greenhouse of the New York Times – the one who got caught marching in an abortion-rights rally. (She also gives embarrassing commencement speeches about crying through Simon and Garfunkel.) Thomas mentioned it would have been great to have bloggers around during Hill’s savage attack on him in 1991, and that it’s nice to have more interpretations of events than the "Linda Greenhouse version." When asked about Republican SCOTUS nominees "growing" in office, he also recommended a classic lament by his friend Judge Laurence Silberman titled "The Greenhouse Effect."

For her part, Ginni expressed happiness (and some nervousness) about her husband doing the Old Media rounds, saying after the 60 Minutes interview "we like CBS right now."

When we were asked to go around the table and say a few words of greeting, I said we at the MRC (in our very primitive new-media way, a monthly newsletter at a glacial pace) were there for the confirmation fight, chronicling the obvious pro-Hill and anti-Thomas biases of the partisan press, connected strategically (and even financially) with the left-wing interest groups. NBC even filmed us in our offices cheering when Thomas was confirmed. My friend Tim Lamer even got the words "strict constructionist" on TV news.

For those who would like to know what it was like to meet Thomas and listen to him, I should say I first met the justice outside of our shared church after Mass one day for a few minutes about ten years ago, and then and now, the first thing you notice is how he shows an interest in you when you’re humbled and want to do that Wayne-and-Garth we’re-not-worthy joke. I would tell you that the first word I would use to describe him is "compelling."

For you slightly older people who remember old TV ads, he has an E.F. Hutton quality – when he begins to speak, people bend their ears to listen. That passion that came out so strongly in 1991, declaring in his sonorous voice "This is a high-tech lynching for uppity blacks who deign to think for themselves" – that’s all still there. (I bet it would still make Ted Kennedy squirm in his seat and send Patrick Leahy straight to his Bat-cave.) The phrase "liberal lion" is an overused word in the media to describe every politician that reporters want to honor. Was Howard Metzenbaum ever anyone’s idea of a lion? If there is one person who defines the term "conservative lion," it is Clarence Thomas.

So what would I ask? I also would have liked to ask about how the allegations against Bill Clinton of sexual harassment and sexual assault were much more serious than Hill’s charges of verbal lechery from Thomas. The utter insincerity of the left-wing attack on Thomas in 1991 was revealed in the left’s refusal to fight for Paula Jones in 1994, when she charged that Clinton dropped his pants and told her to kiss his penis; when the left refused to fight for Kathleen Willey in 1998, when she charged Clinton turned a job interview into a groping session, grabbing her breast and putting her hand on his erect penis; and most amazingly, in 1999, when Juanita Broaddrick cried through an NBC interview recounting her claim that Clinton raped her in a Little Rock hotel room when he was Arkansas’s Attorney General. How could the press still present Anita Hill’s charges as "vivid and vulgar" – compared to all that?

I would have liked to ask about how Anita Hill in 1998 was not out there speaking out against Bill Clinton, but was hosting him at Martha’s Vineyard. Hill announced on Meet the Press that even if Kathleen Willey was groped by the President, it wasn't sexual harassment, since it did not result in any employment discrimination. The woman who wanted to kill the Thomas nomination with Coke-can concoctions said she didn’t think most women would let these charges, so much more serious than hers, derail the Clinton presidency, since he is "better on the bigger issues." But I didn’t. I didn’t have those quotes at the ready.

So I asked about judicial confirmation battles for minorities? How could the president manage to nominate a Miguel Estrada or a Janice Rogers Brown for the Supreme Court? How could the media be expected to react? Thomas deferred, saying he was not a strategist. He seemed very grateful to every person who groomed him and advised him through his own scandalously narrow passage to confirmation.

So I tried again: considering how comparatively easy the nomination battles were for John Roberts and Samuel Alito, did Thomas ever want to display, even comically, some envy that they had it so easy? Thomas said it was a "good question," and then said with an enthusiastic smile that he was "the freest justice on the court." I think he was saying that now that he’s in a permanent job, one that cannot be taken away by the Jeffrey Toobins, he can simply do that job and not obsess over what the Toobins might say.

It was a perfect moment to laugh at Toobin’s notion that our man Clarence, who filled the room all night with his boisterous laugh, was "furious all the time."