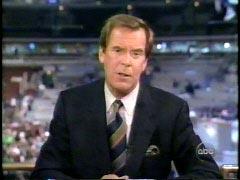 On the heels of his award-winning destruction of Congressman Mark Foley over inappropriate instant messages to teenaged House pages, ABC investigative reporter Brian Ross is on the sex beat again. On Monday's Good Morning America, Ross highlighted ABC’s plans to rummage through a D.C. madam’s list of prostitution clients for "people in the Bush administration." But in 1996, when the tabloid newspaper The Star found Bill Clinton’s chief political guru Dick Morris had a relationship with a prostitute, ABC News (and especially anchor Peter Jennings) found it ugly, distasteful business. On the August 26, 1996 World News Tonight, as President Clinton prepared for his convention’s acceptance speech, Jennings began with a complaining tone:

Good evening, we begin tonight with the sweet and the sour of the Presidential campaign. Here in Chicago today the President has been fine tuning as they say, the speech he will be giving to this convention and to the country tonight. And he has a lot to be pleased about. A very upbeat convention. A very successful train trip here with rising poll numbers to accompany it. And very important set of statistics about the economy today, which he will certainly point to as evidence that the country should re-elect him. And then along comes a nasty little scandal to take the edge off the good news at least for the day. The President’s chief political strategist, a man named Dick Morris, resigned from the campaign today, after a story in a supermarket tabloid that he has been having, he’s a married man, a lengthy relationship with a prostitute and talking about his job.

Jennings then almost boasted: "This story is uncorroborated by us. But it has certainly been a jolt to the White House." Brit Hume's story spent most of its time on the Morris-Clinton relationship. All it described from the Star story was that it alleged "a year-long relationship with a Washington prostitute whom he allegedly allowed to listen on to calls with the President."

Jennings also pounded home the pro-Clinton points that there was "certainly good news for the president" with new economic growth numbers, and that "The President, by the way, does continue to expand his lead over Bob Dole" to 17 points. From the floor, ABC's political reporters also downplayed any negative effect on the Clinton juggernaut.

Cokie Roberts insisted: "In the long term, as one Senator who talked to the president said to me today, the president asked him do you think it will cost me votes? And the senator said, if Dick Morris were running for office it would cost him votes, he’s not the guy running. And I think that’s right."

Jim Wooten was asked how the convention attendees were feeling: "Oh, I think they’re energized. I think with the exception of this Morris story, this convention has gone exactly as the Democratic planners and the campaign planners wanted it. I thought it was a nifty strategy to have the president out there winding his way along the railroad through three states, three key states while there were events here. I don’t think that anybody here is disappointed with much of anything except that supermarket tabloid story."

ABC pounded the word "tabloid" in all of their coverage (even though Hume noted no one in the Morris or Clinton camps denied the Star story). But now ABC is the "tabloid" outlet on the Call Girl beat. Ross touted his scoop on Monday's Good Morning America about a State Department official who resigned in disgrace, even putting on a prostitute's lobbyist to denigrate him: 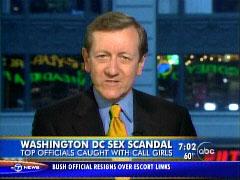 BRIAN ROSS: "More names are likely to surface soon. The woman charged with running a high-end escort service in Washington wants to call as witnesses all her prominent clients, including the man who resigned this weekend as the Deputy Secretary of State, Randall Tobias. Tobias confirmed to ABC News that he had been a customer of a Washington, D.C. call girl escort service run by the woman now dubbed the "D.C. madam," Jeanne Palfrey. Palfrey been charged by federal prosecutors with running a prostitution service for 13 years."

JEANNE PALFREY: "You know, Brian, I learned a long time that everybody puts their pants on one leg at a time."

ROSS: "Before he resigned, Tobias had spearheaded the Bush administration's program to crack down on prostitution worldwide. Tobias enforced a controversial policy that cut off U.S. foreign aid to groups that provided condoms to third-world sex workers or helped them in any way."

ABC went on to dangle the prospect of other prominent Washington names in the madam's records, including "other people in the Bush adminstration," and noted Ross's report will swallow up the entire Friday night edition of 20/20.

ROBIN ROBERTS: "Of course. So who else is on the list?"

ROSS: "Well, it's a long list. We're going through the phone records for the last four years provided to us by Jeanne Palfrey, double-checking the names, and there some very prominent people, lobbyists, lawyers, members of the military, other people in the Bush administration."

ROBERTS: "And we'll be learning more and more about their names. What about the women who worked for the escort service? We understand that had some prominent positions in Washington as well?"

ROSS: "Well, Jeanne Palfrey insisted on very high-end kind of women. These were not street walkers. She insisted they have at least two years of college education. Among the people who worked for her, which we’ve confirmed, several university professors, researchers, scientific researchers with PhDs, a member of the military who was an officer and a legal secretary for a very prominent lawyer in Washington."

This was not the position ABC News pushed in 1996. On the September 2, 1996 World News Tonight, liberal PBS host and former New York Times correspondent Hedrick Smith complained that these kinds of tabloid stories compromised journalism, and Charles Gibson thought they obscured the real issues in America:

HEDRICK SMITH: "We have a problem, though, I think, in the mainstream media, and that is the influence of the tabloids. I mean, here we are, we just had the Dick Morris story, it came out of a tabloid. I mean, go back four years, Gennifer Flowers came out of a tabloid. And then there's the struggle, and I was fascinated, some of your folks let us in on some of your decision-making processes at ABC on how to handle that Gennifer Flowers story. Did you know if it was right? Didn't you know if it was right? When do you run it? How long do you hold? What kind of proof do you have to have? And I think we have a terrible struggle ourselves."

CHARLES GIBSON: "And the tabloid journalism tends to obscure debates about real issues in society."

MRC awarded Hedrick Smith our "Janet Cooke Award" in the October 1996 MediaWatch newsletter for devoting an hour of his four-hour PBS series on The People and The Power Game to "his claim that Bill Clinton has been abused by an uncivil news media."