On PBS, Newsweek Editor, ABC Reporters Say Bush Is Finished, And Outside 'Reality' 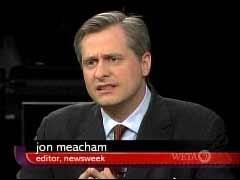 One last tidbit from State of the Union Night: On Tuesday night’s Charlie Rose talk show on PBS, Newsweek editor Jon Meacham and ABC political director Mark Halperin and White House correspondent Martha Raddatz took turns sticking forks into President Bush and saying he was done. Meacham said Bush attempted to show he’s "actually involved with reality, that he’s a reality-based figure." Halperin agreed that the president "wanted to show that he had a reality-based presidency, but I don’t think he did. I think the war is over politically." Halperin even suggested that if Congress could vote by secret ballot, both Republicans and Democrats would vote to end the war – and vote for Bush’s presidency "to end today."

Halperin also helpfully explained how Democrats don't want to take responsibility for anything, and expect Bush to solve all their problems: "I think they want President Bush to cry uncle and take ownership for ending the war and solve their substantive problem -- they want the war to end -- and also to solve their political problem. They don`t want to make a political mistake now when things are going so well by being blamed, as Martha suggested, if they do end the war and force his hand and things go badly."

For her part, former NPR reporter Raddatz said Bush is up for two rough years, "if anyone’s paying attention." She claimed the American people are much smarter than Bush thinks, and "aren’t fooled" when he claimed that the media didn’t report the good news. She was stunned at the most obvious apparent sign of being reality-challenged: "He’s still talking about victory."

If conservatives thought it was amazing that the president called for victory and the Democrats all sat on their hands, liberal journalists thought it was amazing that he was so delusional that he would even use the V-word at this point. In addition to Meacham, Halperin, and Raddatz, Rose "balanced" the show with former Bush Uno aide Kenneth Duberstein (who did nothing for Bush Two but recycle the CW about how desperate Republicans want to get out), political analyst Charlie Cook, and Patricia Williams of the radical magazine The Nation.

"I think he was attempting to establish that he`s actually involved with reality, that he`s a reality-based figure. I think he said several times, this is where things stand. This is not the war we started, this is the war we`re in. And was at least attempting, as Ken said, to signal that he gets it to some extent, that this is not the way things should have gone. Now, with George W. Bush, just to have gotten to "give it a chance" is for him, like Henry II going to Thomas of Becket`s tomb...(laughter)...This is as humble as it's going to get. This is his 'mistakes were made.' This is his -- he`s completely -- and I think we`re in a tragic moment at the moment, genuinely, because no one has a particularly better answer."

Meacham is mocking Bush’s admission of mistakes by comparing it to the story of the English king held responsible for the murder of Becket when four knights murdered him after hearing the king say "will no one rid me of this turbulent priest?" The king was so penitent he walked the streets in sackcloths while eighty monks flogged him. Meacham no doubt would relish the chance to administer that sentence to Bush. Then it was Halperin's turn: 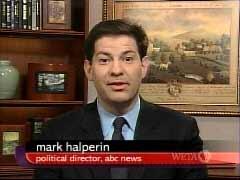 Charlie Cook added to the Bush-is-toast theme: "the fact is that people just aren't listening to him anymore. I mean, they're done." Then Raddatz jumped in.

"I think he`s going to have a very rough couple of years here, Charlie, if anyone`s paying attention to him."

"I think in this instance, what they failed to realize, that the American people are a lot smarter than he may have thought.This was a very simplistic approach to this war. It was very simplistic for him to get up there last year at the State of the Union and talk about being on the road to victory.Americans aren`t fooled by the fact that things are going very badly in Iraq. For a long time, the administration blamed the media -- oh, you`re not covering the good stories, you`re not covering the good in Iraq. But the American people saw through that, as well. There wasn`t a whole lot of good to see.Yes, the troops are performing magnificently, but they are not making a whole lot of progress over there. And I think they heard the president say over and over and over that things were going well. They just knew in the end things weren`t going well. And I think it took a long time for the president to see that."

Halperin then added his theory that the entire Congress would like to kick Bush and his belongings out of the White House and withdraw from Iraq:

"I`m not that into fantasy games, but if you think about three votes in Congress, if they do secret ballot as Ken suggested, bipartisan support, I think the vote would be almost unanimous if the vote was up or down, would you like George Bush`s presidency to end today. I think Republicans and Democrats would be for that in Congress.Second vote, would you like the troops out in three months? Some way that wouldn`t be embarrassing to the United States? I think there would be an overwhelmingly bipartisan support for that."

Meacham then turned to a tried-and-true staple of the liberal media oeuvre, that a Republican president denies reality by replaying movies in his head. In other words, Bush is very Reaganesque in refusing to acknowledge "reality." In retrospect, does the liberal media look wise for saying Reagan wasn't engaged with the reality of the Soviet Union's long history to come?

Meacham: "I think one of the reasons historically that this resolve and this stubbornness is there is I think the movie playing in the president`s head for a long time has been 'The Gathering Storm.' The idea that he is..."

Meacham: "... he is Churchill, and all the naysayers were Chamberlain. And when he received the bronze bust of Churchill -- it sits to the right of the fireplace in the Oval Office -- he said, you know, Churchill always reminded me of a Texan. He did what he thought was right, and he kept after it and he kept after it. And I think that for a long time, that has been what he wants to be."

This inspired the Nation writer to drag out the old Katrina bashing:

Patricia Williams: "I was going to say, 'The Gathering Storm,' this response actually reminds me of it`s more like Katrina. I mean, the incompetence must be some part of why he cannot disconnect, being able to hear what advisers are saying. I keep being reminded of when New Orleans was literally sinking under the sea, under the incoming storm, and there was no response. There was some denial, in fact, from heck of a job Brownie, saying that this was not happening. And I wonder how just sheer incompetence or denial comes into this response."

This is when Halperin explained the political state of play, and how Democrats want to prolong it:

"I have never seen Democrats feel in the Bush era this confident, this certain that the political realities are moving inexorably towards their position, and I have never seen Republicans in the Bush era so unconfident, so concerned that they`re going to keep slipping downward.It is now considered by most people I talk to in both parties conventional wisdom that Senator McCain was just a few months ago not just the Republican front-runner, but the most likely next president. Very few people I talk to think that now. They think whoever the Republican nominee is, is going to be at a disadvantage because President Bush seems determined to keep Iraq as the dominant issue for the presidential campaign."

"So I think it helps the three Democratic front-runners -- Obama, Clinton and Edwards. I think it hurts all the Republican candidates. And within the Democratic Party, you ask what they want, I think they want President Bush to cry uncle and take ownership for ending the war and solve their substantive problem -- they want the war to end -- and also to solve their political problem. They don`t want to make a political mistake now when things are going so well by being blamed, as Martha suggested, if they do end the war and force his hand and things go badly."