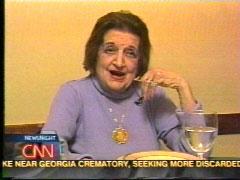 Former White House reporter (now columnist) Helen Thomas was interviewed by the Washington Post's Express newspaper (the free one you can read on the bus or train). Predictably, Helen thought that democracy has now prevailed in America, since democracy and Democrats are interchangeable terms:

EXPRESS: Did this past election start to show that?
THOMAS: I thought the election proved that democracy works. People finally get the message. I think they're fed up with the war and all the torture and all the other things that have been attached to [the United States].

EXPRESS: How do you think this election will affect what happens over the next two years?
THOMAS: I think we've got to get out of Iraq. I think the president is obviously weighing that. They want to do it to save face and so forth, but I think we should save lives.

She also repeated that everyone else in the White House press corps was a pro-war softy except for her:

EXPRESS: You've asked a lot of tough questions. Did they just not answer you or spin it?
THOMAS: One lone voice isn't enough. You can be ridiculed when everyone else is putting on their trench coats and gung ho to go to war, get embedded and so forth. They had no concept. This was Vietnam all over again and it has become exactly that.

EXPRESS: How come people aren't as outraged as they were during Vietnam?
THOMAS: 'Cause there's no draft; every household is not affected. It's that kind of a war. It's very different. People don't feel that affected personally, but they're beginning to wise up and realize that the country is deeply affected.

Finally, Helen employed the old saw that Tony Snow is "attacking" the reporters by defending the White House, but she never sees it as Helen Thomas is "attacking" Tony Snow:

EXPRESS: How is your relationship with White House Press Secretary Tony Snow?
THOMAS: We're talking to each other. His whole technique when you ask a tough question is a best defense is offense. So he starts attacking you personally. I take it in stride — what the hell? The question is asked. He should be asked the questions. But he plays "the best defense is an offense," so he attacks the reporter, which I think is bad form. Just say, ‘No comment' if you don't want to play around with it, but don't start attacking the reporter. We have a right to ask these questions and we would be defaulting on our duty if we didn't.

I think he's enjoying it, but it's getting tougher because he's got to defend the indefensible.