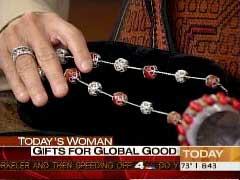 Couric: "I think it's really wonderful how you, just purchasing these products. I mean not only do you get a beautiful object, but you really do feel good about consuming. You know because so often it's just sort of blind consumption, especially in this country, I think. And so to be able to have the full circle happen is really I think a very gratifying thing."

Joan Shifrin, Global Goods: "It's about being a conscientious shopper."

The Couric touted how she and Matt Lauer were both conscientious Global Goods shoppers:

Couric: "Well let's look at some of the products that you all are bringing to market and, and, and helping other people in the process. What should we start with? I guess each one has a story. What about these purses and this jewelry? I happen to have this necklace. And I think Matt might have given this to Annette for Mother's Day."

Couric: "He did right? Because Annette, Matt's wife cares a lot about helping impoverished communities and she's done work with UNICEF and, and all that.

Later she added, "These scarves are also beautiful and I own one of these as well. See I'm helping a lot of people...And are you finding your, you have a big market for all these items. Not just me, right?"

One possible explanation for why NBC hooked up with Global Goods for this promotion is Debra Marks. Her biography on the Global Goods website explains:

Ms. Marks currently works as a Government Programs Executive on Capitol Hill with IBM in Washington, DC. Prior to joining IBM, Ms. Marks worked for 18 years at Dow Jones Newswires, The Associated Press, The Wall Street Journal Europe and CNBC as a chief correspondent and bureau chief in several European capitals.

But wait, there was more bias on Couric's second-to-last day. At 8:15, during a segment on Newsweek retracting it's 1986 issue claiming women over 40 have a better chance of being killed by a terrorist than being married, Couric asked Gail Sheehy the typical feminist question, citing liberal Ellen Goodman:

"Do you think this was a backlash? At the time this article was written was it a backlash against the feminist movement? Because I know Ellen Goodman in the Boston Globe said, 'You know let this be a lesson for women who get too uppity? Who try too hard? Who achieve too much that if you, if you become too successful you're gonna be a failure in your personal life.'"

In the 9:30 half hour, Couric interviewed an accident victim who's now running for the state senate in New York as a Democrat on a platform advocating embryo-destroying stem cell research: "In my years here I've been very fortunate to meet many, many people whose stories have inspired me. In 2000 we brought you the story of an exceptional young woman named Brooke Ellison."

Ellison said she's trying to continue the work of Christopher Reeve, whose last movie was her life story: "Dana's passing and Chris' passing were such an incredible effect on my life. They leave such an indelible and immeasurable mark on the world." She said "funding for education and stem cell research. All of those things are, you know, real big challenges New York is facing right now."