‘Planet in Peril’ Thanks to CNN Marketing Team 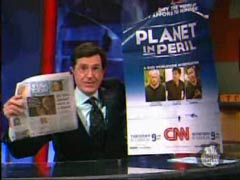 Last night on the Colbert Report, Stephen Colbert took CNN's marketing team to task, pointing out the hypocrisy of putting a "six foot square poster in each of the 2.3 million copies of today's the USA Today. That's 13.8 million square feet of ‘Planetary Peril.'" Planet in Peril a program airing next week on CNN. Colbert who could barely keep himself from laughing went on to say,

"Now the paper is recycled but hopefully that glossy ink isn't going to biodegrade anytime soon, so awareness of this threat is going to be around for centuries. Brilliant marketing CNN, you have strategically insured the planet will still be in peril by the time your special airs next week."

"Planet in Peril" airs October 23 and 24 on CNN. It details all the ailments of Earth today. A quick jaunt through the website shows that global warming will be a top issue. The website highlights various locations throughout the planet where harms such as pollution (China), rising water levels (the Carteret Islands), the black market animal trade (Southeast Asia), and disappearing lakes (Lake Chad in Central Africa). Other issues include, deforestation, habitat loss, overpopulation, and species loss.

The Business and Media Institute will be reporting more on "Planet in Peril" next week.