Seth Meyers of NBC’s Late Night took a cheap shot at Donald Trump by comparing him to Jared Fogle -- The former Subway spokesperson who is pleading guilty to charges of possessing child pornography and paying to have sex with minors. After bringing up Trump’s accusation about fellow Republican candidate Jeb Bush “being out of touch on women’s health issues,” the liberal comedian quipped that the claim was “kind of like Jared Fogle telling you you're creepy.” After some nervous laughter and “ohhhs,” he added “Wait, did something happen with Jared?”

The Late Night host also made jokes about Trump’s hair, and him being featured on the latest cover of Time Magazine.

The relevant transcript is below:

Let's get to the news. The latest cover of Time Magazine features Donald Trump with the phrase "deal with it." I can only assume by the look on Trump's face that the "it" is a kidney stone. 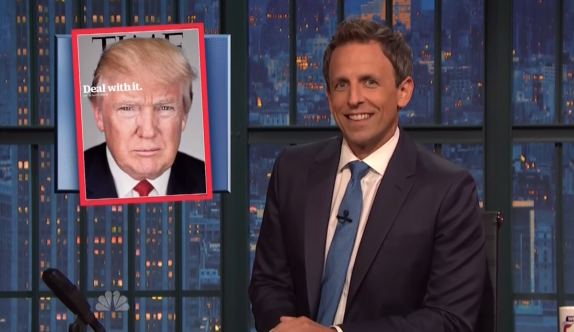