Well the Washington Post is proving true the fear that liberals are using the Confederate flag as a launching pad to censor all expressions of southern heritage. In an Op-Ed the Post published this past weekend, Elizabeth Boyd claims that the Southern belle heritage and all the tradition that goes along with it, is RACIST!

Boyd starts this piece, titled “Remove the Southern Belle from Her Inglorious Perch,” by praising a decision made by the University of Georgia in March which banned hooped skirts from the historical southern-themed balls thrown by fraternities and sororities on campus.

When administrators at the University of Georgia declared a ban on hoop skirts in the spring, I could only think, what took you so long?

But in that sense UGA was really no different from other Southern schools. Long after many universities had officially done away with a variety of Old South symbols, the feminine figure most clearly identified with Dixie — the Southern belle — continued to enjoy free rein. College administrators who had long since banned the Confederate battle flag, nixed the singing of “Dixie” and given plantation-owner mascots the boot were still saying yes to the dress.

And naturally, since hoop skirts are tied to historical southern culture, and southern culture includes living under the Confederacy, and the Confederacy adopted the The Army of Northern Virginia battle flag for a number of uses, and Charleston mass-murderer Dylann Roof posed for pictures with the battle flag—hoop skirts are clearly a part of racist, violent culture of murder!

The crude campus racism would soon pale next to the June tragedy in Charleston, S.C. After the mass murder of nine African American churchgoers, 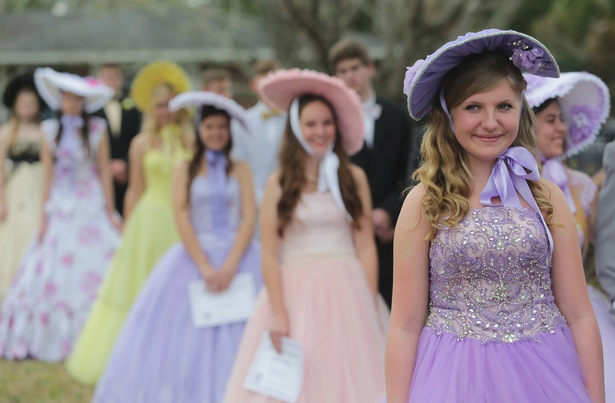 allegedly by a white supremacist who blatantly linked his views with the Confederate banner, the U.S. public engaged in long overdue soul-searching about the true meaning of Confederate symbolism. One result has been the steady removal of its signs from civic life. But related conversations have not necessarily taken place, and the question remains: Will feminine racial symbols — less noticed, highly effective — ever be similarly called to task? Will observers ever recognize what the hoop — and the contemporary belle — have to do with the hate?

Boyd also claims the skirt, along with the balls and culture associated with Southern belles “constitute a choreography of exclusion.” She goes on to deal a back-handed slap to southerners by insinuating they are also a “crime of fashion."

While donning a hoop skirt on occasion may not constitute a hate crime (whether it is a crime of fashion is another matter), make no mistake: The Southern belle performances routinely staged on campuses across the South constitute choreography of exclusion…

In highly stylized renditions of femininity (which differ markedly from their day-to-day routines and visage), otherwise thoroughly contemporary collegians demonstrate their ability to “do” white Southern womanhood: the attire, the manners, the demeanor, the shared references and, above all, the lineage. Such performances stun with their continued ability to consolidate privilege and fly under the representational radar where masculine symbols have all but vanished. Discounted but powerful, these belle performances may not stem from conscious ill intent, but they are surely racial symbols as much as any noose or flag. And they can be plenty intimidating.

Ridiculously, the hoop skirt isn’t even enough. Boyd and the Post want the ENTIRE culture of southern femininity gone.

If UGA and other Southern schools really want to lead, they will not only ban the hoop; they will also go after the belle. This will be tougher to do. It will mean discontinuing support for still-prevalent campus productions that promote imaginative connection with the Old South. And it will mean instituting new campus productions in their place. For their part, traditionally white Southern sororities serious about anti-racism will scrap the belle aesthetic and corresponding performances designed to measure it. They will develop new yardsticks for evaluating potential members that are less about looks and more about leadership. In short, they will confront the central role their choreography plays in reiterating race and class privilege. They will just say to hell with the belle.

In being willing to publish on Op-Ed like this, the Washington Post proves that they are going all-in with their witch hunt designed to label and demonize anything that has to do with southern heritage and history—no matter how innocent it may actually be.