University Of Massachusetts Professor: The United States Needs To Apologize For Using Atom Bomb In Japan

Today is the 70th anniversary of the atomic bombing of Hiroshima, and University of Massachusetts professor Christian Appy wants America to apologize for not allowing the death toll to be more proportional. In a recent article, the anti-American liberal professor suggested that the Allied Forces should have been willing to sacrifice tens of thousands more Americans and extend the war instead of utilizing Little Boy— the atomic bomb born out of the Manhattan project.

Truman did not seriously consult with military commanders who had objections to using the bomb.  He did, however, 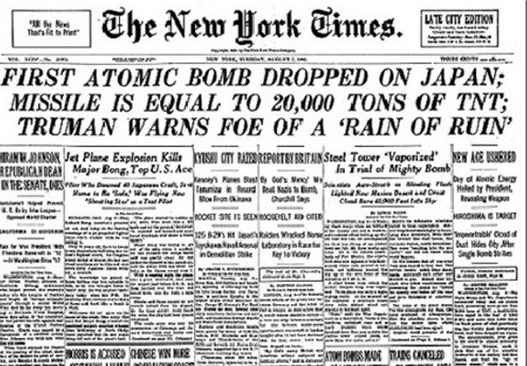 ask a panel of military experts to offer an estimate of how many Americans might be killed if the United States launched the two major invasions of the Japanese home islands scheduled for November 1, 1945 and March 1, 1946. Their figure: 40,000 — far below the half-million he would cite after the war. Even this estimate was based on the dubious assumption that Japan could continue to feed, fuel, and arm its troops with the U.S. in almost complete control of the seas and skies.

Appy also criticized the pro-American military sentiments that were stirred by Laura Hillenbrand’s popular book detailing Louis Zamperini’s heroic story of surviving more than 40 days at sea, only to end up in a brutal Japanese POW camp.

The book is decidedly a page-turner, but its focus on a single American’s punishing ordeal and amazing recovery inhibits almost any impulse to move beyond the platitudes of nationalistic triumphalism and self-absorption or consider (among other things) the racism that so dramatically shaped American combat in the Pacific. That, at least, is the impression you get combing through some of the astonishing 25,000 customer reviews Unbroken has received on Amazon…

In addition to minimalizing Zamperini’s amazing story down to a simple “platitude,” and insinuating that those touched by the book are racially insensitive, he goes on to complain that it didn’t instill enough “empathy” for the Japanese empire in the later stages of the war or condemn the use of the atomic bombs:

Unbroken devotes a page and a half to the atomic bombing of Hiroshima, all of it from the vantage point of the American crew of the Enola Gay. Hillenbrand raises concerns about the crew’s safety: “No one knew for sure if… the bomber could get far enough away to survive what was coming.” She describes the impact of the shockwaves, not on the ground, but at 30,000 feet when they slammed into the Enola Gay, “pitching the men into the air.”

The film version of Unbroken evokes even less empathy for the Japanese experience of nuclear war...

Perhaps he's forgotten the shocking horrors of Pearl Harbor. Perhaps he’s forgotten the brutal determination the Japanese empire exhibited throughout the entire Pacific theatre of war, including a willingness to die in suicidal banzai charges or kamikaze bombings. Rather, like a true liberal professor, Appy demands we issue a “formal apology” over a defensive war declared only after Japan’s horrific bombing of Pearl Harbor. And it doesn’t matter that America returned to help Japan make a full recovery into a much better society— heading complex rebuilding efforts as well as investing billions of dollars into their crippled economy. We still need to say the words. We need to apologize for protecting our own soldiers and citizens.