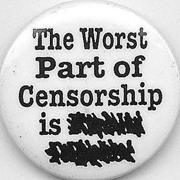 There's a new speech sheriff in the town of Fresno, California, and they want to silence conservative talk radio.  And they'll say or do whatever it takes to get it done.

New "community group" Citizens for Civility & Accountability in Media (CCAM) is super-peeved at Fresno, California radio station KMJ for having the temerity to broadcast (on their two stations) conservative talk radio hosts to whom people want to listen.

Because, you see, it's "hate speech" - according to CCAM.  And therefore, KMJ should "alter their programming" (read: change their content by silencing conservatives) "in order to curtail practices that we believe to be damaging to our social fabric and to civility in public discourse."

It would seem the residents of Fresno do not believe that Rush Limbaugh, Mark Levin, Sean Hannity, Glenn Beck and others on KMJ are "damaging to our social fabric and to civility in public discourse."  But that could not matter less to CCAM.

This local "community group" has organized a press conference for today at 11AM PT to publicly call on KMJ to dump these conservative hosts, who according to them:

"(Have) been, and can be again, a contributor to actual acts of violence perpetrated by people urged on to extremism by the kind of programming that monopolizes KMJ's prime-time broadcast."

There is ZERO evidence of this, mind you, but as always liberals never let the facts get in the way of a good beating.  Or a quality censorship rally.

CCAM goes on to shake the shibboleth of KMJ's broadcast license:

"As a custodian of public air space, KMJ has a responsibility larger than making profit. They have the civic responsibility - at the very least - to not do damage to the society that they are a part of, to promote the idea of truthful information, respectful debate, and lawful dissent."

Which is just what FCC Chief Diversity Officer Mark Lloyd had in mind when he wrote in 2007 that liberal activists should harass conservative stations by filing complaints with the FCC.

In other words, shut them up by shutting them down.

Lloyd wrote this as a theoretical, while a Senior Fellow at the phantasmagorically-liberal "media reform" outfit Free Press.  Now he's the FCC's "Diversity Czar," waiting to help process these Leftist complaints.

Not so theoretical any more, is it?

Whether it's via the so-called "Fairness" Doctrine, their warped interpretations of the nebulous Federal Communications Commission (FCC) broadcast license requirements "localism" and "diversity," accusations of "hate speech" or any other way they can find, the Left is singularly intent on silencing conservative talk radio.

Liberals insist that these censorious steps will not alter the content of these stations.  But of course that is exactly what they will do - and what liberals want them to do. CCAM blows it by freely saying so in their press statement.

The only way to measure the effect of ANY of these liberal assaults on the radio industry is to examine what and who stations can broadcast before and after they occur.   With the likes of Leftist "community group" CCAM and FCC "Diversity Czar" Mark Lloyd doing the assaulting, there will inexorably be less conservatives and Christians on the air.

The Left's ridiculous promises and assertions to the contrary notwithstanding.