McCain Not First to Compare Obama to Paris Hilton

Editor's Note: Update below the fold.

The uproar of the media, serving as adjunct PR firms in defense of their beloved Sen. Barack Obama in response to Sen. John McCain's video comparing the Illinois Senator to Paris Hilton, was deafening. The ad was described as "nasty," "childish" and "juvenile," a "strange" "nuclear attack" for having dared to compare their anointed one to the brainless celebutant hotel heiress.

Sen. McCain and his camp responded that it was all in good fun, and was made only to point out the ridiculous Tiger Beat-squealing teenage girl nature of the over-the-top, all-encompassing coverage thus far afforded Obama by his Paparazzi.

But it appears that someone years ago beat Sen. McCain to the comparison punch.

Would all of this overwrought press hysteria be rendered even sillier were it to turn out that Sen. McCain was in actuality quoting Sen. Obama? Methinks that it would.

There's nothing exotic or complicated about how phenoms are made in Washington, and, more to the point, how they are broken.

"Andy Warhol said we all get our 15 minutes of fame," says Barack Obama. "I've already had an hour and a half. I mean, I'm so overexposed, I'm making Paris Hilton look like a recluse."

That is pretty much the who and the why of Sen. McCain's explanation of his ad, is it not? It turns out he wasn't mocking Sen. Obama so much as channeling him. Or making a mini-documentary out of the Post's article.

Either way, it is just another example of the elite media not liking a Leftist's own words being used against him in the court of public opinion.

Update: Time magazine had the quote as well. From their Verbatim section: 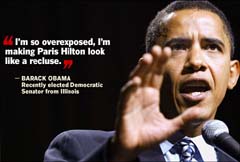 H/t: Of the Capital Research Center, and a fellow NewsBuster, the estimable Matthew Vadum.

Update 2008-08-06 | Matthew Sheffield. Speaking of Paris Hilton, the B-list celeb responded to all this recently in a parody ad.