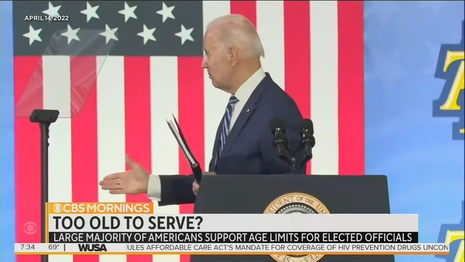 Journalists have done their best to prop up Joe Biden and the Democratic chances in 2022. But there is a sense that the liberal network newscasts are willing to throw the Democrat overboard when it comes to 2024. CBS Mornings on Thursday speculated on when is “too old to serve” for politicians. Among the individuals singled out was Biden. The network even featured a famous clip of the President verbally stumbling and looking confused.

What’s even more shocking about this story is that Dokoupil played a famous 2020 clip of Biden stumbling. It’s famous despite the network attempts to bury it. In 2020, the then-presidential candidate mangled over an attempt to quote from the Declaration: “We hold these truths to be self-evident. All men and women created by — you know, you know, the thing.”

Of ABC, CBS and NBC, only CBS This Morning covered (for 59 seconds) the March 2, 2020 gaffe. So it’s a rare sight to see on any network. On Thursday, Dokoupil concluded of Biden: “Even among Democrats, a recent poll shows that age is the top concern among those looking for a different candidate in 2024.”

Dokoupil’s story offered a bipartisan critique of elderly politicians. He noted, “While over in the House, Nancy Pelosi is the oldest ever speaker at the age of 82.” Of the aging Democratic Senator Dianne Feinstein, the word “senile” actually came up:

TAL KOPAN (Boston Globe reporter): The question of senility is sort of an obvious question.

KOPAN: I and a colleague wrote a column about Senator Dianne Feinstein, raising this very question.  Published in April when Kopan was at the San Francisco Chronicle, she reported that four sitting U.S. Senators, including three Democrats believe the 89-year-old Feinstein's memory is rapidly deteriorating, and she may be mentally unfit to serve.

Regarding the Republican Donald Trump, Dokoupil played self-praising moments and reminded, “Former President Trump portrayed himself as the healthiest chief executive in American history.... But with clips like these, critics tried to argue that in fact he's in the midst of a dangerous decline.”

But the important figure in this story is Biden. After years of defending and ignoring his age-related gaffes, it appears that journalists are open to the idea of turning to a younger Democrat for 2024.

TONY DOKOUPIL: We are back now at 7:30 here on CBS Mornings. And we are diving into the question of whether American politics has an age problem. Let's go through the numbers. President Biden, already the oldest sitting president, is set to become the first president to turn 80 in office. By the way, that's a feat that former President Trump would match if he wins another term. Meanwhile, the U.S. Senate is also the oldest in history with an average age of nearly 65. While over in the House, Nancy Pelosi is the oldest ever speaker at the age of 82. Now you might say such is the will of the voters, and that is true. However, many Americans are also admitting to doubts, and it's raising a delicate question: How old if ever is too old for national office? If you want a really educated opinion about our political elders, you could do a lot worse than to start here. Behind the wheel of a golf cart at the Villages in Florida. America's largest senior community. [To a senior citizen.] Do you support age limits in politics?

DOKOUPIL: [Back to taped package.] We already know what many younger Americans are thinking

JOE CUNNINGHAM: Our country and our state are being run by geriatric oligarchy.

CUNNINGHAM: That's why it's time to put term limits and age limits on politicians.

DOKOUPIL: But surely that kind of talk would sound ageist to older Americans. Right? Do you think our politicians are too old?

MAN: There is an age I think when —  when a person doesn't have the capabilities of conducting the kind of things you have in office.

WOMAN: I feel the same way.

DOKOUPIL: In fact, just about every single person we ran into at the Villages supported age limits.

DOKOUPIL: Out of politics?

DOKOUPIL: It's not just in Florida either. A new CBS News poll finds 73 percent of all Americans support maximum age limits for elected officials. With greater support, to my surprise, coming from seniors than from younger adults.

DOKOUPIL: Youth used to be a defining feature of America. Under wigs and powdered hair, the average Founding Father was actually a mere 44.

TAL KOPAN (Boston Globe): The question of senility is sort of an obvious question.

KOPAN: I and a colleague wrote a column about Senator Dianne Feinstein, raising this very question.  Published in April when Kopan was at the San Francisco Chronicle, she reported that four sitting U.S. Senators, including three Democrats believe the 89-year-old Feinstein's memory is rapidly deteriorating, and she may be mentally unfit to serve. The dynamic that was being described of a senator who was unable to recall conversations that had just happened, that raises a real question as to whether the principal is running the office anymore.

DOKOUPIL: I was struck by the part of the piece that you describe some sources as telling you this in sadness.

KOPAN: I would say almost every single conversation, yes.

DOKOUPIL: In a statement, Feinstein cited the hard times she's had adjusting to her husband's recent death, saying “I work as hard as I can to solve problems for the people of California.” But it's not just congress that has people thinking American politics has an age problem.

DONALD TRUMP: I am a young, vibrant man.

DOKOUPIL: But with clips like these, critics tried to argue that in fact he's in the midst of a dangerous decline.

LAWRENCE O’DONNELL: You had a right to wonder if there's something wrong with the workings of the president's mind.

DOKOUPIL: And President Biden has faced some of the same criticism from his political opponents.

JOE BIDEN: All men and women created by — you know —  you know the thing.

BRIT HUME: These are signs of senility, which a common thing in elderly people.

DOKOUPIL: And even among Democrats, a recent poll shows that age is the top concern among those looking for a different candidate in 2024.

DOKOUPIL: Dr. Mark Lachs is chief of geriatrics at Weill Cornell Medicine in New York. What is it that a voter should look for legitimately when it comes to age and performance?

DOKOUPIL: Is it not a softball?

LACHS: It's not a softball. It's a hardball. Yeah, it's very difficult for a lay person to do that.

DOKOUPIL: He explained that, yes, it is normal as we age for the brain to shrink.

LACHS: Look at the size of these two brains.

DOKOUPIL: yes, in general, an older mind is more likely to struggle with memory.

DOKOUPIL: But many 80-year-olds are sharp as ever, which is why he says political age limits would be both arbitrary and wrong.

LACHS: You know, aging brings something that youth doesn't. It's judgment and experience. There's no replacement for that over a lifetime of relationships. You mentor younger people. I mean, if there were no older people in the legislature, who's going to bring these young people up?

DOKOUPIL: Back in Washington, Tal Kopan says there's already a test that determines whether any given politician is too old for office. It's the test that happens on election day.

KOPAN: The answer is the voters. At the end of the day, the collective power of the American electorate is the only way to effectuate change in our government, by flaw or by design, that is what it is.

DOKOUPIL: It is what it is. You could end every piece that way. By the way, we also reached out to the White House for comment on this, and a spokesperson told us: “As President Biden has said, anyone with questions about his age should just watch him,” closed quote, then listed off a number of the President's accomplishments. That same person pointed out that the poll that we mention head showing concern among Democrats over the President’s age also showed that jut three percent in that poll listed mental acuity, his sharpness, as their top concern.

GAYLE KING: I like the doctor in the piece who said if you've met one 85-year-old, that's what you've met, one 85-year-old. I don't think it's the age so much as the person and their ability. I think it should be focused on what the person can do as opposed to the age. The problem is most people don't know it's their time go. Have you ever tried to take keys away from an older relative? I mean, they're clutching them. They have the death grip on it. So they don't understand when the time has come.

VLAD DUTHIERS: You know, again, as you point out in the piece, the majority of Americans do believe that there should be some limits on age. And the problem, of course, is that those lawmakers who ultimately would have to craft that legislation are themselves in their 70s and 80s. So they're not looking to take themselves out of a job.

KING: I like the term limits. I like term limits more than age. I think after you've been in the job for X amount of years, certainly in politics, I think that it —  you need a fresher perspective, a near point of view I think.

DUTHIERS: Yes, that is very sad. That makes me sad.