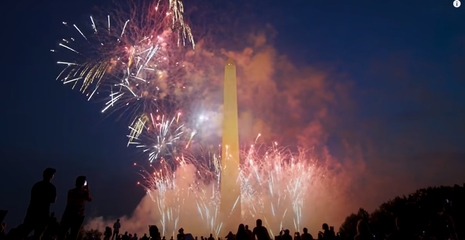 For most Americans, the Fourth of July is a time to celebrate the heritage of this country, the freedoms that we enjoy as citizens that so many others around the world do not. But journalists in America often use Independence Day as an excuse to complain about everything that’s wrong with the country.

We at NewsBusters dug into our archives to find recent and not-so-recent examples of journalists trashing the United States on its birthday. As you celebrate this Fourth of July, be sure and tune out the negative, defeatists press.

“Not everyone is equally at risk from the noxious particles that suffuse the sky during our pyrotechnic light shows. In California, for example, vulnerable populations are more exposed to fireworks pollution on the Fourth of July....Vulnerable populations appear to be more exposed to this pollution.”
— National Geographic writer Madeleine Stone on the “The Hidden Toll of July Fourth Fireworks,” NationalGeographic.com, July 2, 2021

Jericka Duncan: “I mean, he [Trump] had a lot of ties in there with unity, equality, special tributes obviously to the military. And could this also have been a recruiting tool when you think of the military and the fact that the numbers are down when it comes to recruiting people for the Army.” ....

Margaret Brennan: “But that showcase of the military hardware that we’re showing pictures of here, some would say it overemphasized America’s military might and it underplayed the American values that have been used to justify the use of force, and so that is something that the President will be criticized on.”

— Discussion on the July 5, 2019 CBS This Morning about the previous day’s Fourth of July rally in Washington D.C.

We hear the stories of discrimination in education and housing and jobs all the time. We hear the violence between races. Do you think it's possible that America is simply an inherently racist place?... Happy Fourth of July.”
— Today substitute co-host Matt Lauer, July 4, 1994.

“America, the greatest country on Earth, a narrative sold to tiny patriots. Reinforced by every cartoon, movie, cheeseburger and mattress sale.....Turns out a lot of countries have freedoms. And while we boast about them, using our rights is a different story....It’s gotten to a point where I think there are specific times and places where you can confuse America for a developing country....America may have once been the greatest. But today, America, we’re just okay.”
— New York Times video op-ed “Why America Is Just Okay,” July 1, 2019.

“George Bush campaigned in a flag factory during his 1988 presidential run against Michael Dukakis. Bush was blasting Dukakis back then as 'a card-carrying member of the American Civil Liberties Union.' A faint echo of the late Joseph McCarthy's 'card-carrying member of the Communist Party,' but it seemed to help Bush.”
— Reporter Bruce Morton in a 4th of July retrospective on CNN's Late Edition, July 4, 1999.

“So as you've celebrated yet another Independence Day, as you've toasted the great victory in Iraq one more time, as you've marveled at the success of the $4.4 million tanks (88 times costlier than their World War II counterparts) and the $28 million bombers and the $106 million Stealth fighters, you might also think for a moment about how some -- just some -- of the $880 billion the world put out for the military last year might have otherwise been spent. On things like health. And the environment. And education.”
-- NBC News President Michael Gartner in a USA Today column, July 9, 1991.

[Thanks to Director of Media Analysis Geoffrey Dickens and former Media Research Director Rich Noyes and for providing some of these examples in previous NewsBusters studies.]