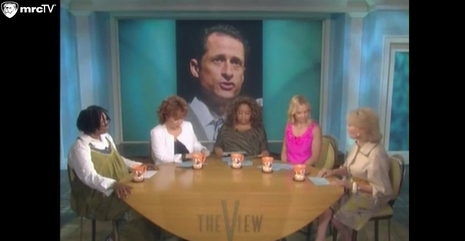 If you ever wondered whether the liberal media’s horror over sex scandals is entirely situational and dependent on political party, Anthony Weiner settled it for all time. It was 11 years ago this month that the former Democratic Congressman faced calls to resign after sending sexually explicit pictures of himself to a young woman. But that didn’t stop many in the media from attempting to defend the then-rising star.

Famous journalist Barbara Walters, then a co-host of The View, aggressively defended Weiner on her show. On June 2, she echoed the idea that the penis pictures were all part of some grand conspiracy against the “good” Weiner:

Co-host Joy Behar: "But, Barbara, couldn't he be fully clothed almost and then they photocopy it and put it like that?"

Co-host Barbara Walters: "Somebody has to go to a lot of effort to get you in trouble."
Behar: "Well, somebody is out to get him, apparently, 'cause they don't like his politics."
— Exchange on ABC's The View, June 2, 2011.

When it became clear that he was likely going to be forced out, Walters returned to The View to chastise her colleagues for daring to call for Weiner’s resignation:

"You thought that Anthony Weiner should resign, and that seems to be what a great many people are saying. So I don't think so. I think what he has done is unfathomable. I think the pictures are disgusting. But I think he has hit rock bottom and this may be what he needed so that he changes his life. He has been a good and effective Congressman. His wife, who we now know is pregnant, has said she is going to continue with the marriage. His constituents want him.

The ethics committee can investigate him and chastise, but not necessarily throw him out. And we had a President named Bill Clinton who went through a great deal of trouble, weathered the storm and is now not only respected, but he's beloved by many people with a very good marriage. So, I think Anthony Weiner should hang in there. He was a good Congressman, and maybe he can weather this all and be effective."
— Barbara Walters to her co-hosts on ABC's The View, June 9, 2011.

When, inevitably, Weiner was forced to resign, NBC’s Today mourned the sad fall of Weiner:

Correspondent Luke Russert: "We can now report Anthony Weiner has stepped down, and this is really a sad ending, a lot would say, to what was once a bright, promising political career...."
NBC political director Chuck Todd: "He'd become sort of a hero to the more progressive left, who were always upset that Democrats don't stand up for themselves. So here was the guy that had all this potential to become a huge political figure...."
— NBC's Today, June 17, 2011.

(For more on Weinergate, see our 10th anniversary retrospective.)

So next time you hear journalists excitedly calling for the resignation of some conservative involved in a sex scandal: Remember, they don’t really care. It’s all partisan politics from the liberal media.