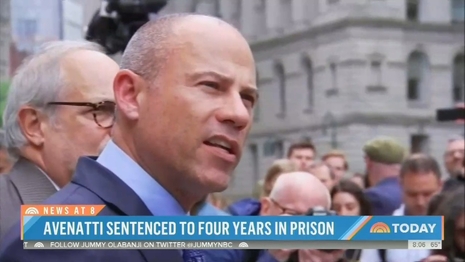 ABC’s morning and evening newscasts on Thursday and Friday totally censored it. On CBS, you could see the latest — if you happened to be up and watching the CBS Morning News at 4:11 a.m. Eastern on Friday. Otherwise, there was a blink-and-you’ll-miss-it seven second mention in the CBS Mornings “eye opener” tease on Friday.

Disgraced lawyer Michael Avenatti was sentenced yesterday to four years in prison for stealing from his client Stormy Daniels. Avenatti was convicted of wire fraud and identity theft for wrongly pocketing about $300,000 meant for the adult film star. The money was part of the advance Daniels was paid for her explosive 2018 memoir Full Disclosure.

In 2019, when the networks imagined that the noble Avenatti would run against Donald Trump, ABC, CBS and NBC featured him for 24 appearances. (12 on ABC, 7 on CBS and 5 on NBC.)

On Thursday, CNN.com offered a single story on the Avenatti sentencing. The network itself ignored the story on Thursday afternoon and Friday morning.

Yet, somehow, when Avenatti went to prison in 2021 for attempting to extort Nike out of $20 million, CBS and NBC ignored it. Back in February, they skipped the verdict in the Stormy Daniels case as well.

Here's the montage video that NewsBusters video editor Bill D'Agostino did in 2019. Warning: It includes media personalities comparing him to “the Holy Spirit.” So you can see why journalists don’t want to talk about Avenatti’s fall from grace.