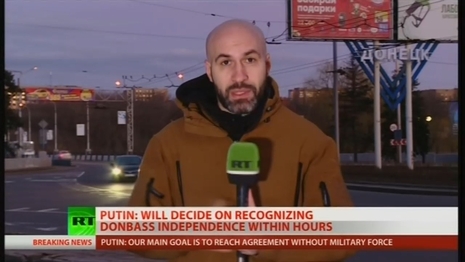 On Tuesday morning, the news broke: DirectTV was FINALLY dropping Russian propaganda outfit RT (formerly known as Russia Today). With that, we ask: what took so long? During the invasion of Ukraine, the network has been spewing a steady stream of lies that blame the Ukrainian people for being invaded, ridiculous spin about saving the country from phantom Nazis and other falsehoods.

We at NewsBusters looked at RT and complied five of the most offensive, idiotic, ridiculous falsehoods. Here they are:

Invasion? What Invasion? There’s No Invasion

On RT, the “information” shared by the hosts is only as good as the most recent propaganda talking points from the Kremlin. On February 23, the day before the full scale invasion by Russia, RT was still telling viewers it wasn’t coming. News on RT America host Fran Fronczak opened her show by huffing, “Reports citing U.S. intelligence sources saying Russia is set to invade in the next 48 hours. Is it a fact or another piece of fake news?”

She scoffed at the very idea of Russia invading:

The Russians are coming, however, the Pentagon cannot tell us when, where, or how they're going to invade. Although reporters — or Pentagon stenographers as I like to call them — say their sources tell them it’s coming in the next 48 hours. Now, if you have watched any cable news outlets today, it was maps with lines all over it, reminiscent of NFL commentators drawing out of football plays, predicting the Putin playbook and whether he’ll invade from the south, come in from the north, or come around and sweep the Ukrainians from behind!

A guest told Fronczak that the chance of a full-scale invasion was “near zero.” News presenter Nikki Aaron claimed, “The Russian defense ministry says there’s no threat to civilians in Ukraine and the Russian president stressed Russia had no plans to occupy its neighbor.”

Fact check: The next day, Russia launched a full-scale invasion of Ukraine.

Russia Must Save Ukraine From the Secret (Uh, Jewish?) Nazis

On a February 24 edition of RT’s Headline News, “political commentator” Ali Rizk warned of the threat of Nazi Ukraine.

It's been well documented that there is a strong presence of neo-Nazis in Ukraine, particularly in that eastern region in Donbass. It's even been documented groups like the Azov Battalion, for example, which is part of the Ukrainian National Guard. It's also been documented that you have a general neo-Nazi culture which is prevalent amongst the Ukrainian armed forces, so when you have the presence of neo-Nazis — such a strong neo-Nazi presence right next door, you know, that in itself is a big threat to national security. So, you know, we could say I was somewhat surprised at Russia didn't take any steps even before this given the fact that this neo-Nazi threat has increased.

You have to remember that recently, for example, at the beginning just a few months ago, we began to see the Ukrainian President Zelenskyy imposing some new laws, which could be descried as racist laws in the eastern regions, like imposing Ukrainian as a sole language.... Zelenskyy himself with a leading or a leaning towards that right-wing neo-Nazi path — what I mean to say, is that Ukraine as a whole, even its government recently, was taking more and more of a neo-Nazi path. So I think, in light of those developments, such intervention must have been inevitable.

Fact check: Ukrainian President Volodymyr Zelenskyy is Jewish. He lost family in the Holocaust and is not a secret Nazi sympathizer.
Fact check: Claims of a large Nazi threat in Ukraine are “absurd,” according to PBS and other outlets.

Ukrainian Shelling Own People, Leaves Just the ‘Bottom Half’ of a Civilian Victim

RT correspondent Murad Gazdiev appeared February 21 during their coverage after a Putin address to claim they had “witnessed” a Donbass coal miner being blown up by the Ukrainians themselves, shelling the man as he went to work. According to Gazdiev, “A coal miner, who was headed to his shift, reportedly, was killed there. We saw the grisly aftermath. We only managed to find half, the bottom half of his body. He was killed in a direct hit.”

Fact check: This poor Ukrainian victim was killed in a “direct hit” and you still found the “bottom half” of his body? We weren’t there, but readers can decide that one for themselves.

The Ukrainians Are Giving Up... Any Day Now

As NewsBusters Deputy Managing Editor Nick Fondacaro pointed out, RT's Gazdiev made another outlandish claim on Monday. He claimed that fighting units “belonging to the regular military” were “choosing to negotiate” and “lay down their arms and return to their homes.”

Continuing the Russian propaganda lie that Ukrainians are “happy” to be invaded, Gazdiev spun: “There are certainly civilians who have been happy to see Russian forces, but there – but there have also been those who have been less than happy to see, again, Russian troops advancing through Ukraine.”

Fact check: Less than happy is a vast understatement. And no, the Ukrainians have not mostly surrendered.

One common thing you see on RT is the “journalists” simply parroting the exact talking points coming out of the Kremlin. Here’s Ilya Petrenko on March 1 repeating that, one, Claims of war crimes are “nonsense,” two, if the Ukrainians just surrender, everything will be fine, and, three, claims of cluster bombs being used against the Ukrainian people are “complete lies” (click “expand” to read more):

We also heard a few things from the Kremlin spokesperson Dimitri Peskov, who was taking questions from journalists. Now, a few important points that he made, let me just go through the accusations against Russia according to the Kremlin, the accusations of war crimes are nonsense. That's something new Dimitri Peskov said. Besides this, Russia continues to consider Volodymyr Zelenskyy the President of Ukraine. That other message for the Ukrainian leadership that came from Dimitri Peskov was that if  Volodymyr Zelenskyy, as the leader of Ukraine, agrees to lay down arms, in that case, there will be no victims on either side. Plus, we also heard from the Kremlin's Press Secretary that the accusations gets Russia that Russia could be using cluster bombs or vacuum bombs is also complete lies.

Fact check: Human rights groups and Ukraine’s ambassador have accused Russia of using cluster and vacuum bombs. Vacuum bombs produce a blast wave that vaporize human bodies. The United States hasn’t yet confirmed their use, but maybe Russia and RT aren’t authoritative sources on this? As for war crimes, the International Criminal Court is investigating.

DirectTV continued to carry the lying, propagandistic RT until March 1, 2022. Maybe corporate media outlets need to direct their outrage where it belongs: Towards the falsehoods being spewed from RT.

[Special thanks to Director of Media Analysis Geoff Dickens, NewsBusters Deputy Managing Editor Nick Fondacaro and NewsBusters managing editor Curtis Houck for finding many of the offending examples of propaganda.]