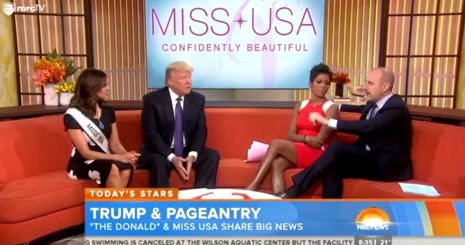 On March 13, 2014, Trump appeared to promote the Miss USA pageant, but Lauer was agitated by Trump’s critique of Obama: “You've been critical of the President and his handling of the situation with Ukraine and Crimea.”

He continued, “I think you said, I'm paraphrasing here, but basically Putin was playing with or toying with Obama. That is kind of a common refrain of yours....You always think that Obama is being weak.”

Lauer demanded, “What would you have done differently than he did in the days before Russian troops went into Crimea?”

Regarding Russia, media outlets in 2012 mocked then-Republican presidential candidate Mitt Romney for calling the country “our number one geopolitical foe.” They cheered Obama for saying that “the 1980s are now calling to ask for their foreign policy back.”

LAUER: Okay, you've been critical of the President and his handling of the situation with Ukraine and Crimea. I think you said, I'm paraphrasing here, but basically Putin was playing with or toying with Obama. That is kind of a common refrain of yours, I should mention. You always think that-

DONALD TRUMP: Well, and a lot of other people.

LAUER: But you always think that Obama is being weak. What would you have done differently than he did in the days before Russian troops went into Crimea?

TRUMP: Well, first of all, it should have never happened.

LAUER: But what would you have done immediately?

But we should definitely be strong. We should definitely do sanctions. And we have to show some strength. I mean, Putin has eaten Obama's lunch, therefore our lunch, for a long period of time. And I just hope that Obama, who's not looking too good, doesn't do something very foolish and very stupid to show his manhood. I just hope that doesn't happen.

TAMRON HALL: Okay, let's talk about your political career. All the rumors swirling around whether you're going to run for governor of New York. The announcement, I think, is sometime later this week, but obviously you're here now. You broke the news about [the Miss USA Pageant being held in] Baton Rouge. Why not tell us now if you plan to run for governor?

TRUMP: Well, I'm just, I'm thinking about it, it's not high on my mind.

HALL: But you've been thinking about it for a while, right?

TRUMP: No, no. The Republican leaders came to see me. They want me to run so badly and I think I'd win if you want to know the truth.

HALL: Do you want to run in your heart?

HALL: But some people think unifying means you want them to anoint you as the only choice.

TRUMP: Okay? That's absolutely true. I wouldn't want to go through primaries and waste a lot of time, effort, and money. But this is an election that can be won. New York has a lot of problems, including it has the highest taxes of any place in the United States, and I think it can be won.

LAUER: Make your announcement soon. Erin, I'll vote for you if you want to run, by the way.

ERIN BRADY [MISS USA]: Thank you. Maybe that will be in my future, who knows?

LAUER: There you go.

LAUER: Donald Trump, Miss USA Erin Brady, thanks to both of you. And again, you can see the 2014 Miss USA competition June 8th, 8/7 Central Time, right here on NBC.