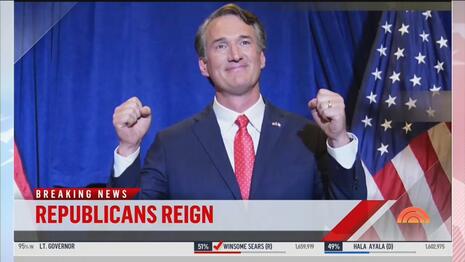 The Washington Post, a paper that has endorsed every Democrat for Governor in Virginia since 1977, reacted to its latest defeat, the victory of Virginia Republican Glenn Youngkin, by arrogantly pivoting to a lecture about how he should govern. The liberal outlet on Thursday featured multiple articles, in the news and opinion section, with worry about just what type of governor the newly elected conservative would be.

A front page story in the print edition warned, “A sharp turn looms in Virginia.” The online version fretted, “Republican Glenn Youngkin became Virginia governor by wooing both moderates and Trump supporters. So how Trumpy is he?” Talk about out of touch. Remember, a majority of the state VOTED for this “sharp turn.”

The article by Gregory S. Schneider and Laura Vozzella cited an anonymous who worried about a possible Ted Cruz of Virginia:

A Democratic official who also spoke on the condition of anonymity to avoid offending Youngkin put it this way: “We don’t know this guy. He could govern like a Larry Hogan, he could govern like a Ted Cruz,” he said, referring to the Republican governor of blue state Maryland and the deep-red senator from Texas who stumped for Youngkin ahead of the Virginia GOP convention.

Schneider and Vozzella then spun that Critical Race Theory isn’t taught in Virginia schools. But there are numerous examples showing that it is.

All summer, his biggest applause line at Republican rallies has been a vow to immediately ban the teaching of critical race theory in public schools. Given that the academic concept about systemic racism is not in Virginia’s K-12 curriculum, and that curriculum policy is generally carried out by the state Board of Education, not the governor’s office, it’s not entirely clear what action Youngkin will take, though he could issue an executive order expressing the priority of the governor on the topic.

The Post even got into whether Youngkin’s outfits were just a cover for extremism:

The lanky, 6-foot-5-inch former college basketball player spent $20 million of his personal fortune promoting his background as a homegrown Virginian. His uniform of white button-down shirt, khakis and red fleece vest is the antithesis of the boxy Trump power suit.

A Post editorial again thought it appropriate to lecture the man it worked to defeat:

It’s also reasonable to wish that he plays down the divisive social issues that worked well enough in the campaign, but will do little to make him a good governor. Certainly, many Virginians who supported him did so despite the campaign’s divisiveness, not because of it, and trusting that his business career will position him to be a skillful steward of the state’s economy.
...

Mr. Youngkin surely understands this, and also that Virginia is not Texas. It’s a moderate place — he is the first Republican elected statewide since 2009, and the state legislature is closely divided.

A separate op-ed featured this headline: "An abnormal Republican Party was treated normally by voters in New Jersey and Virginia."

The Washington Post, which declared that “democracy dies in darkness,” doesn’t seem to be happy when democracy goes in a different direction. Look forward to four years of lecturing Governor Youngkin. And then the paper will endorse another Democrat in 2025. As for the outlet's lecturing, a good rule of thumb for conservatives is to never accept advice from people that don't have your best interest at heart.