Cowardly Journalists Chuckle as Biden Jokes About Murdering Them

Imagine if Donald Trump had jokingly threatened to murder journalists standing in front of him. They probably wouldn't have laughed. Yet that’s what Joe Biden did on Tuesday and the assembled reporters just chuckled at the funny threat. While test driving an electric Ford F-150, ABC's Cecilia Vega broke up the adoring queries about the car by actually asking, “Mr. President, can I ask you a quick question about Israel before you drive away since it’s so important?”

Biden, who was sitting in a truck at the time, sneered, “No, you can’t. Not unless you get in front of the car as I step on it. I’m only teasing.” The off-camera journalists awkwardly snickered in reply. Biden then drove off, having threatened the press and then not answered the serious question.

Just prior to a real question, the reporters acted as Democratic hacks, offered up sycophantic queries about the photo-op. They included, “How does it feel to be behind the wheel, sir?”  and “Mr. President, how fast were you going?” Biden was happy to answer those. 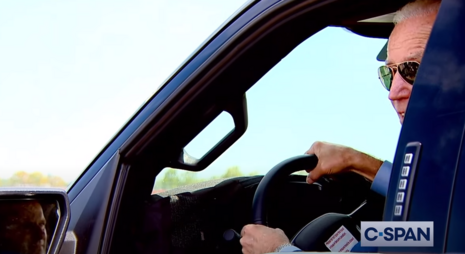 We don’t actually have to imagine how the networks would react if this were Trump. In July of 2017, the then-President tweeted a video of a wrestling video in which Trump grappled with a superimposed CNN logo. On the July 3, 2017 Today, Hallie Jackson warned, “A spokesperson for the cable network saying, ‘It is a sad day when the President of the United States encourages violence against reporters’...”

Then-CNN political commentator Sally Kohn fretted, “Both sides have a problem with hateful crazies. The difference is the left denounces theirs. The right elects theirs president.” Journalists on the network declared Trump a “dangerous” madman who will get members of the press killed.

How will Cecilia Vega report this story? Wonder how the people at CNN feel now? They probably laughed along with the reporters Biden threatened today.

Here’s a transcript of the exchange:

CECILIA VEGA: Mr. President, can I ask you a quick question about Israel before you drive away since it’s so important?”

JOE BIDEN: No, you can’t. Not unless you get in front of the car as I step on it.