MSNBC this week just gave a daytime hosting slot to a journalist who once slimed the late Chris Kyle, the real American Sniper, as a “racist” fond of “killing sprees” while serving in Iraq. Ayman Mohyeldin Reports debuted on Monday. According to Mediaite, the “rebrand” reflects the network’s move to “the journalism from correspondents and experts who provide analysis and a deeper understanding of the day’s news events, according to the source.”

Ayman Mohyeldin has a vile perspective when it comes to an American hero like Kyle. A little over six years ago, on January 29, 2015, he went on a rant during that day’s Morning Joe. Talking about the film American Sniper, he ranted:

AYMAN MOHYELDIN: A lot of his stories when he was back home in Texas, a lot of his own personal opinions about what he was doing in Iraq, how he viewed Iraqis. Some of what people have described as his racist tendencies towards Iraqis and Muslims when he was going on some of these, you know, killing sprees in Iraq on assignment. So I think there are issues -- 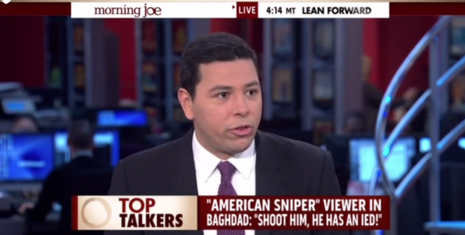 MOHYELDIN: When he was involved in his -- on assignments in terms of what he was doing. A lot of the description that has come out from his book and some of the terminology that he has used, people have described as racist.

The disgusting smear of Kyle was so over-the-top that Morning Joe co-host Willie Geist stepped in to refute Mohyeldin on the same show:

It wasn't a commentary about the war. It wasn't about the politics of the war. It was a character study of what this guy went through. And you don't have to like him and all the comments about him calling Iraqis savages. He was calling the people he was shooting savages. He was calling people who he thought had IEDs, who he thought were going to kill his buddies savages. He didn't -- some people have seized on that term that he thought all Iraqis or everyone in the Middle East is a savage. That's just not what he said. It's not what he said. He was talking about the people he was fighting in the theater, calling them savages.

More than 20 retired generals and admirals, along with dozens of other retired military officers, have reportedly joined the Media Research Center in writing a letter demanding an apology from NBC’s parent company Comcast after a news correspondent claimed on-air that slain Navy SEAL Chris Kyle engaged in “killing sprees.”

“[Kyle] is a hero, not a talking point for a smug journalist,” the group wrote in a letter, signed by more than 60 retired military leaders, to the Comcast Board of Directors being delivered Tuesday, the Washington Examiner reported.

The letter comes after Middle East reporter Ayman Mohyeldin said during a Jan. 29 segment of MSNBC’s Morning Joe that critics have described Kyle as having “racist tendencies towards Iraqis and Muslims when he was going on some of these, you know, killing sprees in Iraq on assignment.”

Is this the kind of "deeper analysis" that MSNBC viewers could expect from Mohyeldin's new show?