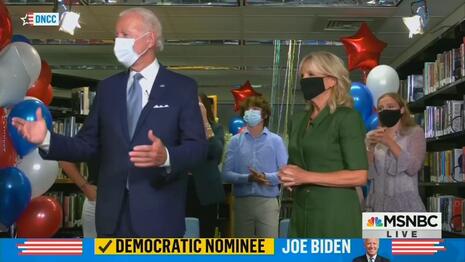 MSNBC and CNN turned their broadcasts into DNC TV again on Tuesday, airing, with no commentary, the Democratic National Convention feed. One wondered why the journalists and hosts were even there as they had nothing to do.

The scant 21 seconds not controlled by the DNC came when the song "Celebration" played as Joe and Jill Biden awkwardly stood in front of the camera. Rachel Maddow briefly broke in and then apologized for doing so: “We’re actually not interrupting. We’re going right back to it. We were just having a moment. Sorry! Right back. Sorry!” On Monday night, MSNBC aired 118 minutes and 24 out of 120 total.

It seems unlikely that MSNBC hosts next week, during the Republican convention, will feel the need to apologize for briefly breaking away from official party videos. It should also be noted that MSNBC went without commercial breaks on Tuesday night during the 9 p.m. to 11 p.m. Eastern hours.

CNN on Tuesday night aired almost all of the Democratic convention unfiltered, managing 116 minutes and two seconds. The cable network only broke away for commercials late in the 9 p.m. Eastern hour during the roll call vote.

We’re only half way through the Democratic convention. MSNBC and CNN aren’t providing any sort of commentary. The cable networks are just being willing propagandists, airing the equivalent of state TV. Look for quite the contrast during the Republican convention next week.

To see how MSNBC and CNN hyped DNC propaganda on night one, go here.

T-Mobile sponsored the propaganda on CNN. Click on the link to let them know what you think.

Here's a transcript of the brief MSNBC break-in:

RACHEL MADDOW: Okay, the Zoom shots where they are getting their reactions from people around the country?

JOY REID: We came for a convention and a Zoom party broke out.

NICOLLE WALLACE: I like too that they had the technical glitch of a black Zoom box.

MADDOW: Hello, real. We’re actually not interrupting. We’re going right back to it. We were just having a moment. Sorry! Right back. Sorry!