Chris Cuomo Gushes Over Disgraced Franken: ‘Your Voice Is Needed’

Liberal CNN host Chris Cuomo on Friday gushed over the disgraced Al Franken, mourning his 2017 exit from the Senate amidst multiple allegations of unwanted touching. Cuomo mostly ignored the scandal that ended Franken’s career, instead marveling at the Democrat’s intellect and passion. He cheered: “Your voice is needed.”

Instead of asking the former Minnesota Senator tough questions, Cuomo fawned, “Do you miss being in the Senate?” The obvious answer came: “Yes, of course I do. I mean it was I could do stuff for people.” Regarding Democrats who now regret forcing Franken out after groping allegations, Cuomo sympathized,  “The New Yorker comes out with an article, eight of the Senators who were against you are in this article saying they regret it, and they say that to different degrees.... When you saw this, how did it hit you?”

Sounding more like a PR firm and less like a journalist, Cuomo concluded, “I am grateful that you took this opportunity.... Your voice is needed.” The ex-Senator attacked Donald Trump on the Coronavirus:

But we need to be talking about Donald Trump and how awful he is, as not just a President but as a human being. And look, right now, we have this Coronavirus. When you have a crisis like this, the strongest thing you can bring to it, as a leader, is credibility, and he has none.

But the disgraced senator does? Cuomo didn’t make this point. Instead, he begged to be on Franken’s podcast: “There's only one Al Franken Podcast though.Never been invited myself.” Later, he returned to the topic, joking, “And look, the podcast thing hurts, not going to lie, Al.”

Also not mentioned? An October 2019 New York magazine story in which a woman claimed Franken “put his hand on my ass.” 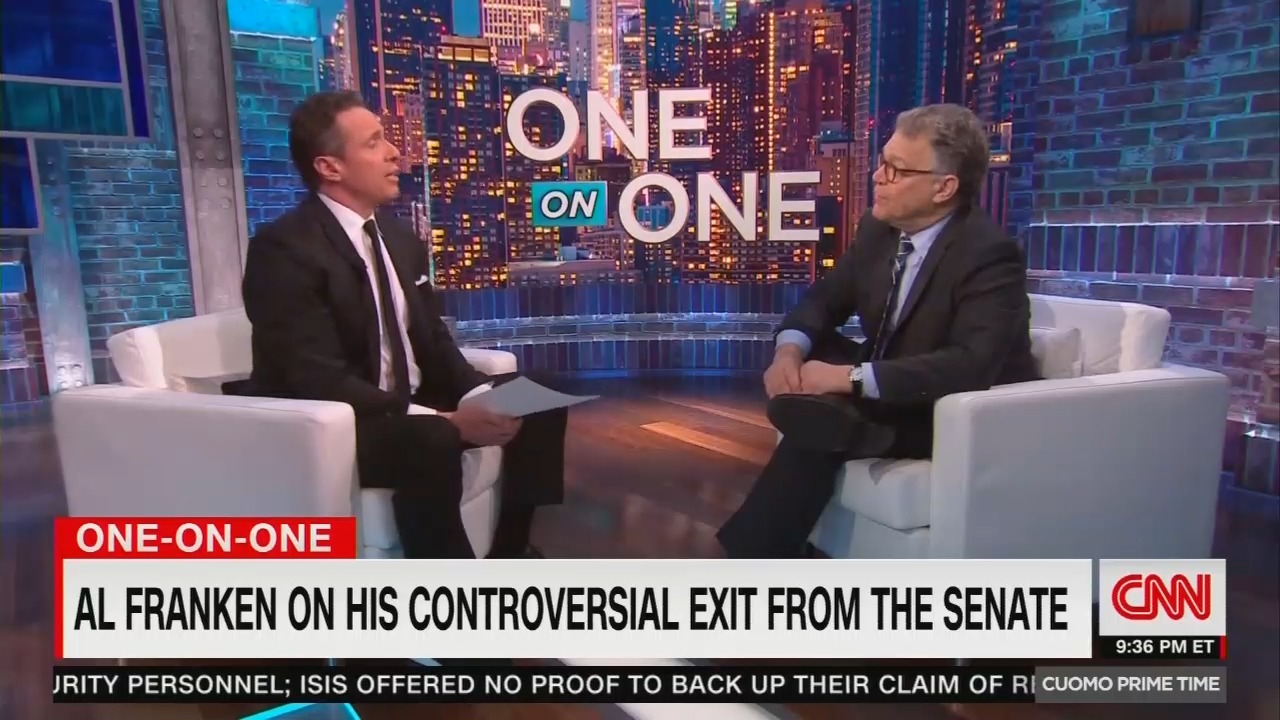 CHRIS CUOMO: Former Senator Al Franken, the Minnesota Democrat, joins us in a primetime exclusive to talk politics future, present, and past.

CUOMO: Senator, pleasure to see you.

AL FRANKEN: Great to see you.

CUOMO: How you've been doing?

FRANKEN: I've been doing great. I've been really busy. I, you know, it's very important for me to have my voice out there. I've been doing this podcast. That sounds pathetic usually because there are 600,000 podcasts. But I —  a lot of people are listening to it and.

CUOMO: There's only one Al Franken podcast though.Never been invited myself.

FRANKEN: That's true. Well we - we do very deep dives on issues.

CUOMO: Oh, then I don't belong there.

CUOMO: I'm starting with levity because I don't see much cause for joy with what's going on in your Party right now.

FRANKEN: It's been frustrating.

CUOMO: You tell me though--

FRANKEN: It's been frustrating.

CUOMO: --how do you see the state of play?

FRANKEN: Well the state of play is what it is. We are - appears that we're down to the two candidates, and they'll hash it out. And I've been frustrated because I've been watching these debates, and

FRANKEN: Instead of arguing about - well let's take health care, OK. Well we'll have - it's good that we're all looking to get to Universal.But we won 40 seats the last cycle, and we won it for a reason, which is the Republicans win in '16, they have both Houses, and they're going to repeal and replace, and what do they come up with?

FRANKEN: 23 million Americans lose their healthcare under that plan. You lose your protections. States can get rid of all these different protections on--

CUOMO: Do you miss being in the Senate?

FRANKEN: Yes, of course I do. I mean it was I could do stuff for people.

I could do like the medical loss ratio, I could do. That was a big thing. I could do small things like. Because of what I wrote into the reform of No Child Left Behind, foster kids no longer have to change schools, if they get a new foster family outside the district.

CUOMO: You made real things happen.

And I just know there is some kid that is playing basketball now with his teammates, even though his foster family is in a different school district. I required them to get a ride, give the kid a ride.

CUOMO: It's the beautiful part of public service.

CUOMO: Let me ask you something about--

FRANKEN: And I'm continue - that's what I'm doing now, is trying to make a difference--

FRANKEN: --in a whole bunch of different ways.

CUOMO: And look and you can. It's just--

CUOMO: --regrettable when somebody who has that kind of passion for public service winds up having to exit it, not on their own terms. The New Yorker comes out with an article, eight of the Senators who were against you are in this article saying they regret it, and they say that to different degrees. In fact, some go much further than that. We're going to put up the Senators names and the fact that they say it. When you saw this, how did it hit you?

FRANKEN: Well I knew. Those eight had - had apologized to me. I mean they've done it privately.

CUOMO: But why apologize? They take a vote that goes against you and then they say they regret it?

FRANKEN: — which they signed up for this thing to me.

FRANKEN: It's I appreciated them saying that they should have - give me due process. Well so and, you know, I am friends with - with them. And I am a forgiving person. And I was grateful that they said that in The New Yorker.

CUOMO: I am grateful that you took this opportunity.

FRANKEN: I am grateful to you.

CUOMO: Your voice is needed.