Andrea Mitchell isn’t even trying anymore. The veteran liberal journalist on Wednesday co-anchored live impeachment coverage and gushed over the “remarkable,” “dignified” Nancy Pelosi, lamenting that she must face off against the “profane” Donald Trump.

Regarding the six page letter the President sent Pelosi, Mitchell derided it as “partly profane, angry, vituperative letter filled with exclamation points.” Profane? That word is generally defined in a religious way as Dictionary.com explains: “[It is] characterized by irreverence or contempt for God or sacred principles or things; irreligious.”

In contrast, the NBC journalist gushed over the Democrat: “Nancy Pelosi has been a remarkable figure in all of this. She has been completely maligned and dismissed and attacked in this extraordinary letter, the six-page letter that the President obviously had a great hand in writing.”

Mitchell underlined yet again just how amazing Pelosi is: “But Nancy Pelosi has been dignified and really straightforward.... She understands the politics. They could lose control of the House. Depending on how they handle this and whether they do it in as dignified a way that they can.”

Get it? She’s dignified. In early December, Mitchell acted as a character witness for Pelosi, saying that she could “attest” to Pelosi’s “deep faith.” Regarding the dustup with a reporter over whether the Democrat “hates” Trump, Mitchell defended, “A lot of people don’t understand the role that Catholic faith plays in Nancy Pelosi’s life.”

LESTER HOLT:  Andrea just think for a minute what Hallie just said. We can see a split screen of Congress impeaching the President and he's at a rally. Does this essentially define what happens going forward in the 2020 race? 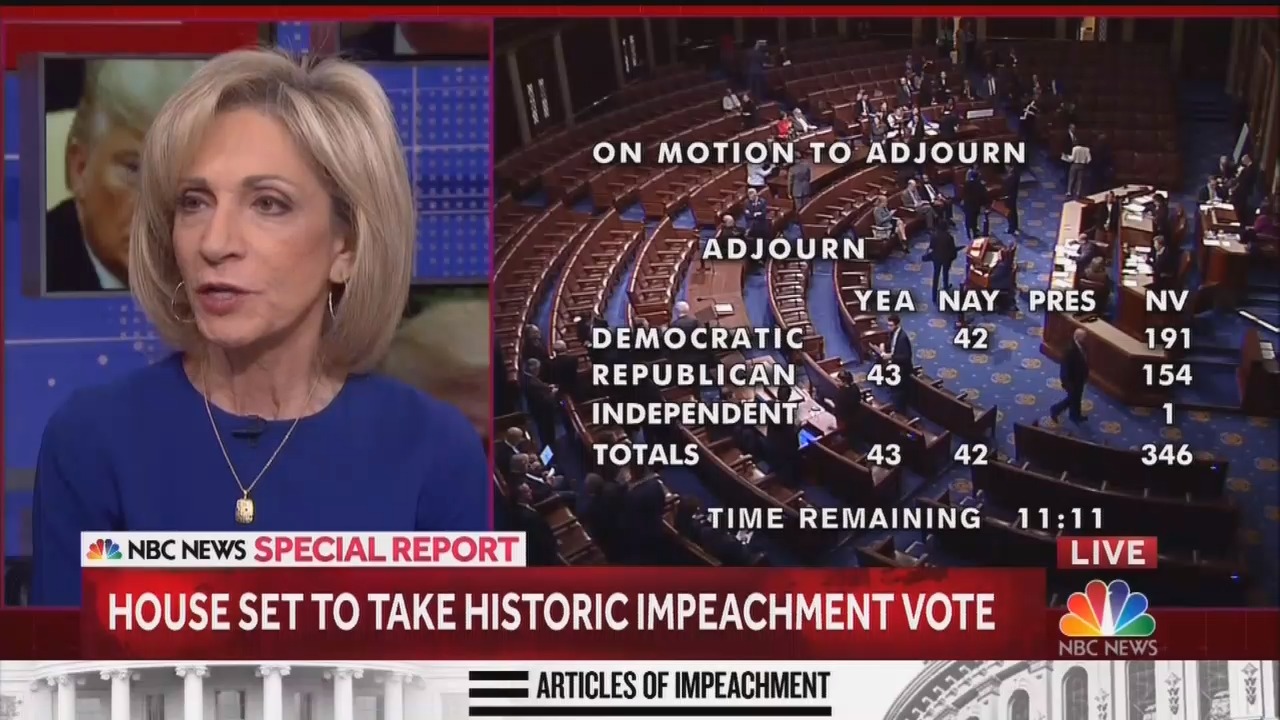 ANDREA MITCHELL: Absolutely. This is the division of the country, nearly evenly divided on the subject of impeachment. The President will be voicing what he said in this extraordinary letter. Hallie mentioned how unusual it is, partly profane, angry, vituperative letter filled with exclamation points. It is virtually dictated by the President. You're going to hear that in his almost stream of consciousness rally in the key state of Michigan where you have, of course, one of the three states that helped elect him. Three states that switched to the Trump column and were not really combated by the Democrats.

MITCHELL: Nancy Pelosi has been a remarkable figure in all of this. She has been completely maligned and dismissed and attacked in this extraordinary letter, the six-page letter that the President obviously had a great hand in writing. And as Hallie Jackson has reported, was aided with Steve Miller, one of his most hardline domestic policy advisers, in charge of immigration policy, it sounded very much like the Steve Bannon, American carnage rhetoric from the inaugural address.

It was that aspect of Donald Trump's political personality coming out. He was clearly furious. We hear from all of our reporting, angry, the mood in the White House angry. You're going to hear some of that among the partisans in this debate. But Nancy Pelosi has been dignified and really straightforward. You saw that one flash of anger at a reporter who asked if she was doing this because she hates Donald Trump. That was about two weeks ago. She turned back on her heels, went back to the microphone and said, “I am a Catholic, I was raised a Catholic, we don't hate anyone. I was raised not to hate anyone. So don’t mess with me.” And stalked out. That brought a lot of partisan reaction, as well as cheers from Democrats who really admire the way she has led this caucus, saying she did not want to go to impeachment.

Did so reluctantly and finally went along with it because of what happened with Ukraine. As you see with the articles of impeachment, they do not except in passing refer back to all of the Mueller investigation when they talked about the pattern of abuse, that in the first article what refers implicitly and very subtly but not legally to everything that preceded it. But that informs what they're doing but not what led to impeachment. She understands the politics. They could lose control of the House. Depending on how they handle this and whether they do it in as dignified a way that they can.