CBS: Trump’s ‘Critics’ (Including Those at CBS) Link Him to Shooting

The journalists at CBS This Morning on Thursday resorted to the “critics” say line of attack to link Donald Trump the mass slaughter seen this past weekend. It became clear that the segment, which included new contributor Maria Elena Salinas, included “critics” at CBS. Co-host Anthony Mason introduced, “Since the shooting, President Trump has come under scrutiny for his use of the word invasion to describe migrants. His critics have linked his language to the manifesto.”

Salinas, who was an anchor at Univision for 36 years, connected the mass killer to Trump: “Since the President came into office, and what they're feeling is that people feel unprotected. It's not only that they feel threatened, but they feel unprotected because they feel that rhetoric and agenda has extended to all institutions in the country.”

No mention, of course, was made of the Dayton, Ohio shooter who endorsed Antifa violence and Elizabeth Warren and called himself a “leftist.”

Salinas promoted the connection of Trump to an atmosphere that leads to violence: 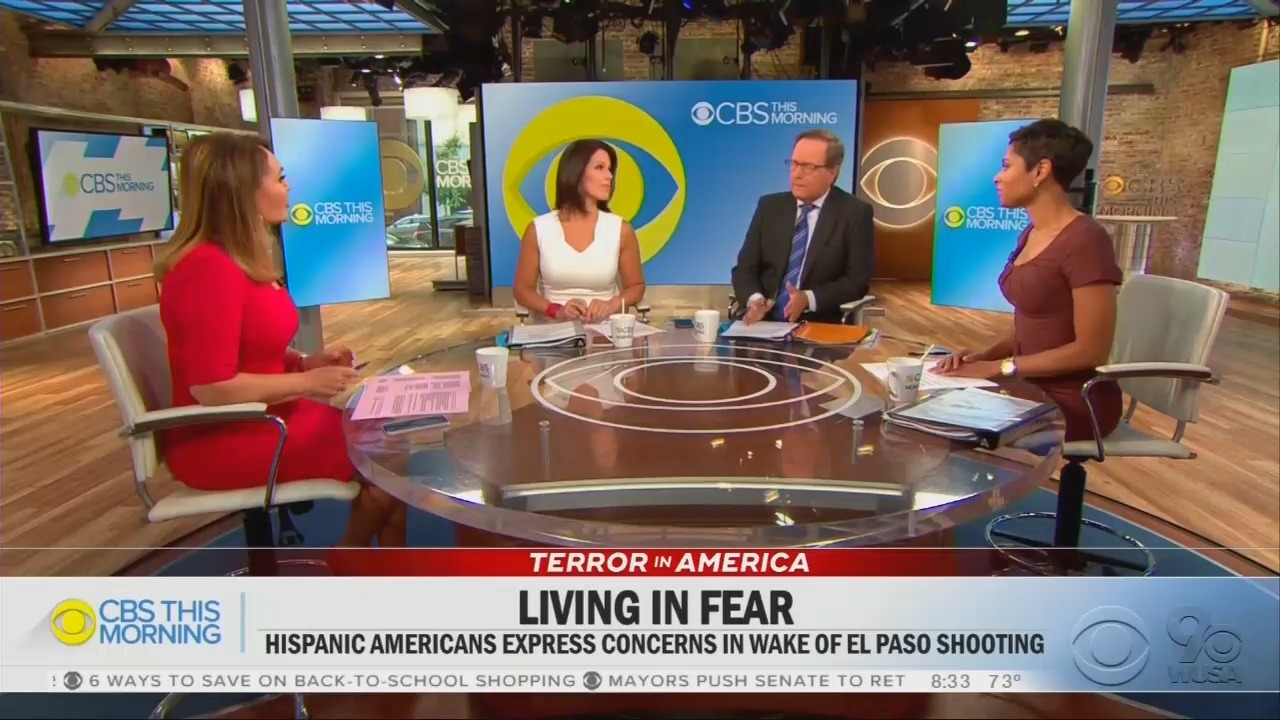 Now they fear for their lives. At some point it's disbelief because they can't understand why is this happening to them in their community, a welcoming community, a community that lives in harmony with their neighbors south of the border, and they're angry because they believe targeted in revenge for being like sort of ground zero for the immigration debate and for the separation of families. They mention a militia, an armed militia who was there just a few months ago who got their arms and said, “We're her representing President Trump to stop the invasion.” That's similar language we saw in the manifesto and that is similar language that have heard from the President.

In her past at Univision, Salinas, the new CBS contributor, has failed to hold Hillary Clinton accountable. She’s ridiculously claimed that Univision isn’t biased. Salinas even turned up in secret Hillary Clinton e-mails. MRC Latino’s Jorge Bonilla explained in October of 2016: “Communications Director Jennifer Palmieri determined that Univision would be the friendliest venue in which to deal with the email scandal- and that Maria Elena Salinas should handle the interview.

ANTHONY MASON: Hispanic Americans say they are fearful and anxious in the wake of the mass shooting in El Paso. A gunman opened fire inside a Walmart and killed 22 people, Saturday. A racist manifesto posted online before the shooting claimed, quote, “This attack is a response to the Hispanic invasion of Texas.” Since the shooting, President Trump has come under scrutiny for his use of the word invasion to describe migrants. His critics have linked his language to the manifesto. Our newest CBS News contributor Maria Elena Salinas joins us. She’s a veteran journalist who has co-anchored Univision’s evening news program for more than 30 years. Maria Elena, welcome. Thanks so much for being here.

MARIA ELENA SALINAS: It’s such a pleasure to be here.

MASON: It’s great to have you in the family.

SALINAS: I wish it were under better circumstances.

MASON: Yes. So do I. Let's talk about this. Because we heard from some people in El Paso earlier in the broadcast. Hispanics, every one of them articulated so eloquent how fearful they are about the climate in this country. What have you heard?

DANA JACOBSON: Is this just El Paso? What are you hearing from other communities?

SALINAS: I think that this is across the board. I spoke to community leaders and leading organizations across California and Arizona. In Arizona Lucha  told me this is something they have been fearing for a long time. They say that people in their community are afraid to go out. She told me the story of a young lady who said, “I was planning on going to Walmart with my mother and now I'm afraid to go to any public place.” Arizona is very resilient community, they're very proactive, and they're already planning not only to have different ceremonies to honor those who were killed but also to go out there and get people mobilized and get them to vote. And in California, other organizations told me something very interesting. She said, “The fear has been there for a long time, again,” again since the President came into office, and what they're feeling is that people feel unprotected. It's not only that they feel threatened, but they feel unprotected because they feel that rhetoric and agenda has extended to all institutions in the country.

DUNCAN: How do you counter the fears and also the rhetoric you've heard from our president?

SALINAS: I think you counter that by telling a story and using your voice. I'm glad you mention that. A majority are and people need to understand that. They're Americans too. There seems to be a perception out there that Latinos are immigrants or they don't belong here, and that couldn't be farther from the truth. 60 percent are American citizens born in the U.S. And another 30 percent are naturalized citizens. They have just as much right as anyone else that became a naturalized citizen, like Melania Trump, for example. They need to be seen as Americans, and they need to stop feeling threatened or like they are foreigners in their own country.

MASON: Maria Elena, we saw in the graphic just there, Latinos make up 18 percent of the U.S. population.

MASON: Do they have a sense of their political power, do you think?

SALINAS: I think they do have a sense of the political sense of their political power, but at the same time, there's many people who don’t go out and vote. You know,  the percentage of people that go out and vote, the turnout is very low among Latinos. But that has been changing in the last election and it's changing not on a national level. But you see it in Arizona. You see it in Nevada, and in Florida, California. During the midterm elections we saw an increase in voter registration and people going out to vote. Voter turnout especially among young Latinos, ones that are really driving now the political force in the community.