Chris Matthews isn’t happy with CNN. The Hardball host fumed over the fact that there was no impeachment talk during night one of the Democratic debate. Matthews asked the same question over and over, demanding to know why Democrats didn’t talk about removing the President. Talking to Congresswoman Dina Titus of Nevada, he complained, “Congresswoman, last night nobody brought up impeachment. They're running against Trump and they never bring it up. What do you think that's about?”

Talking to the Congresswoman, he worried that time was running out: “What do you think is going on right now in the House? Is it an hourglass that's moving faster? Is it accelerating in time to get this thing rolling and time to get it done, or at least started?”

Finally, a glum Matthews stated he didn’t see it happening:

MATTHEWS: Michelle, do you think they're going to impeach Trump?

GOLDBERG: At some point I think they

MATTHEWS: This Congress? I disagree. I don't think they will. 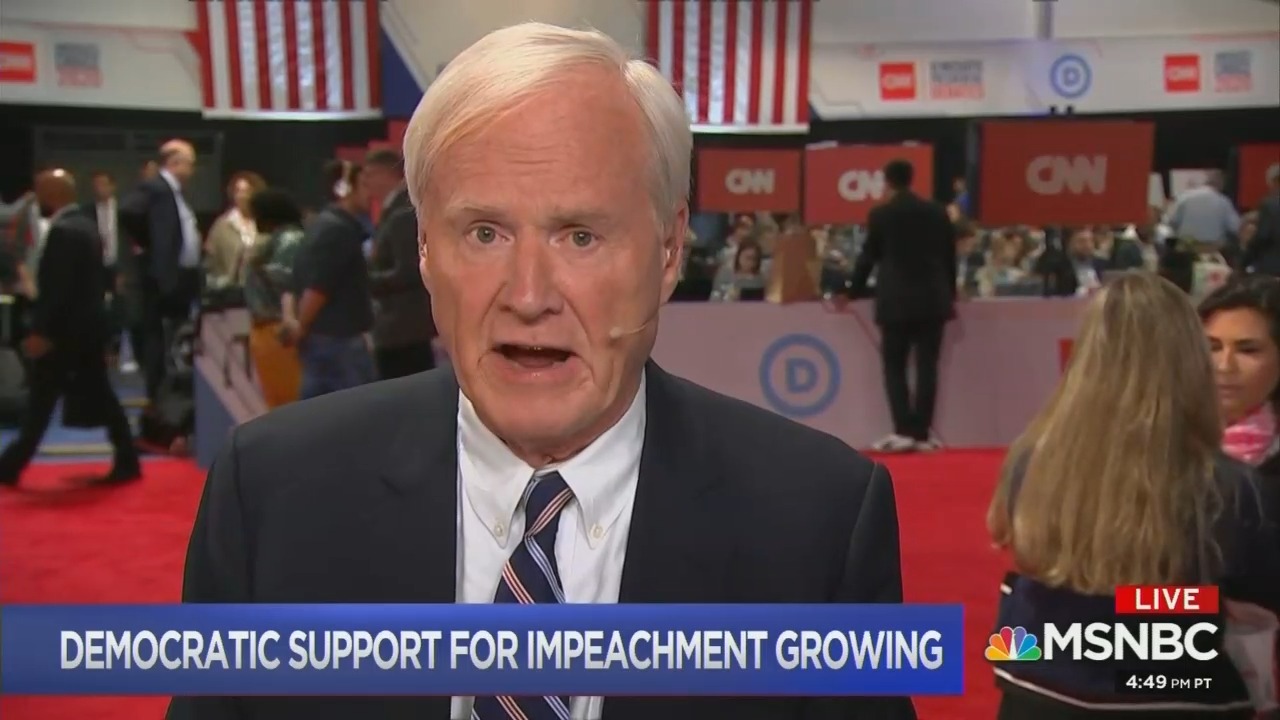 CHRIS MATTHEWS: Welcome back to Hardball. It's been one week since former special counsel Robert Mueller testified on Capitol Hill, and the number of house Democrats now supporting impeachment or impeachment hearings against trump continues to rise. Since Mueller's testimony, 20 More House Democrats have joined the list. The total number of house members, Democrats, 115. 114 are Democrats, that includes independent congressman Justin Amash. But while Democratic candidates attack president trump 34 times during last night's debate, not once in all those two hours did any candidate for president mention the word “impeachment." I'm joined by Democratic Congresswoman Dina Titus of Nevada, who announced her support for an impeachment inquiry just this week, and Michelle Goldberg, columnist for the New York Times. Congresswoman, last night nobody brought up impeachment. They're running against Trump and they never bring it up. What do you think that's about?

MATTHEWS: You mean to tell me that politicians need to have the interviewer bring up a topic? I've been following this thing for 100 years. I got to tell you something, you politicians have no problem bringing up a topic if you want to. Why didn't anybody want to bring it up last night?

MATTHEWS: Let me go to Michelle. You've been watching this. What do you think is going on right now in the House? Is it an hourglass that's moving faster? Is it accelerating in time to get this thing rolling and time to get it done, or at least started?

MICHELLE GOLDBERG: Well, it's clearly rolling. And I also think it is started. You know, when people say that they want Nancy Pelosi to come out in favor of an impeachment inquiry, basically, she would have the house vote to instruct the Judiciary Committee to begin an impeachment investigation. Well, the Judiciary Committee has begun an impeachment investigation. That was what happened last Friday when it in that legal filing that it submitted in the lawsuit to get the underlying grand jury testimony. So the process has begun. I guess the question is.

GOLDBERG:  Right. But, but, the judiciary committee -- the judiciary committee had already begun its work before the house in the Nixon impeachment voted then to sanction it. And what the people on the judiciary committee will argue is that yes, that's been the process in the last two presidential impeachments there. But is no about the way impeachment is supposed to be conducted. The Constitution doesn't say anything about how an impeachment inquiry is to be sanctioned. It's not the House rules. When they impeach judges, often the Judiciary Committee begins the process on its own. And clearly Nancy Pelosi is behind this strategy, or at least is in favor of this strategy of now they're going to court and saying we are conducting an investigation into whether or not to recommend articles of impeachment to the full House.

MATTHEWS: Well, today Republican Senator John Kennedy of Louisiana presented an ultimatum to Democrats over the issue of let's listen.

SENATOR JOHN KENNEDY:  If the Democrats, democratic friends feel that strongly about it, then they need to go hard or go home. You know, stop talking about it. Go to Amazon, buy a spine and do it. But if they're not going to do it, then they need to accept the fact that Donald Trump is president of the United States and they need to let him go about doing his job.

KENNEDY: Let me go to the Congresswoman again. When do you have to begin this process formally of looking at impeachment if you're going to do it this Congress?

MATTHEWS: Michelle, do you think they're going to impeach Trump?

GOLDBERG: At some point I think they

MATTHEWS: This Congress? I disagree. I don't think they will. I think it's a reasonable bet.

GOLDBERG:  Look, you're going to get very close to a point where a majority of democratic congressmen come out for impeachment, and a super majority clearly believe that he merits impeachment. Right? There is no question about whether he has committed high crimes and misdemeanors. The only debate is about whether this is politically viable and politically smart.