Once again, only ABC bothered covering the latest details on the potentially shady financial dealings of Joe Biden’s youngest son, Hunter. CBS and NBC on Monday night and Tuesday morning skipped the implications for the Democratic front-runner and the embarrassing details about the younger Biden’s activities.

Good Morning America looked into the latest details, coming from a New Yorker story, but reporter Linsey Davis mostly focused on Hunter Biden’s struggles with drug addiction. However, she briefly explained, “There's the matter of Hunter Biden's business dealings, allegations he leveraged his father's name to win business in Ukraine and China where Hunter accompanied his father on an official trip in 2013.”

She attempted to dismiss the controversy: “As for those overseas business dealings, Hunter Biden denies claims there was anything unethical and there has been no evidence that Joe Biden used his influence to help his son.” 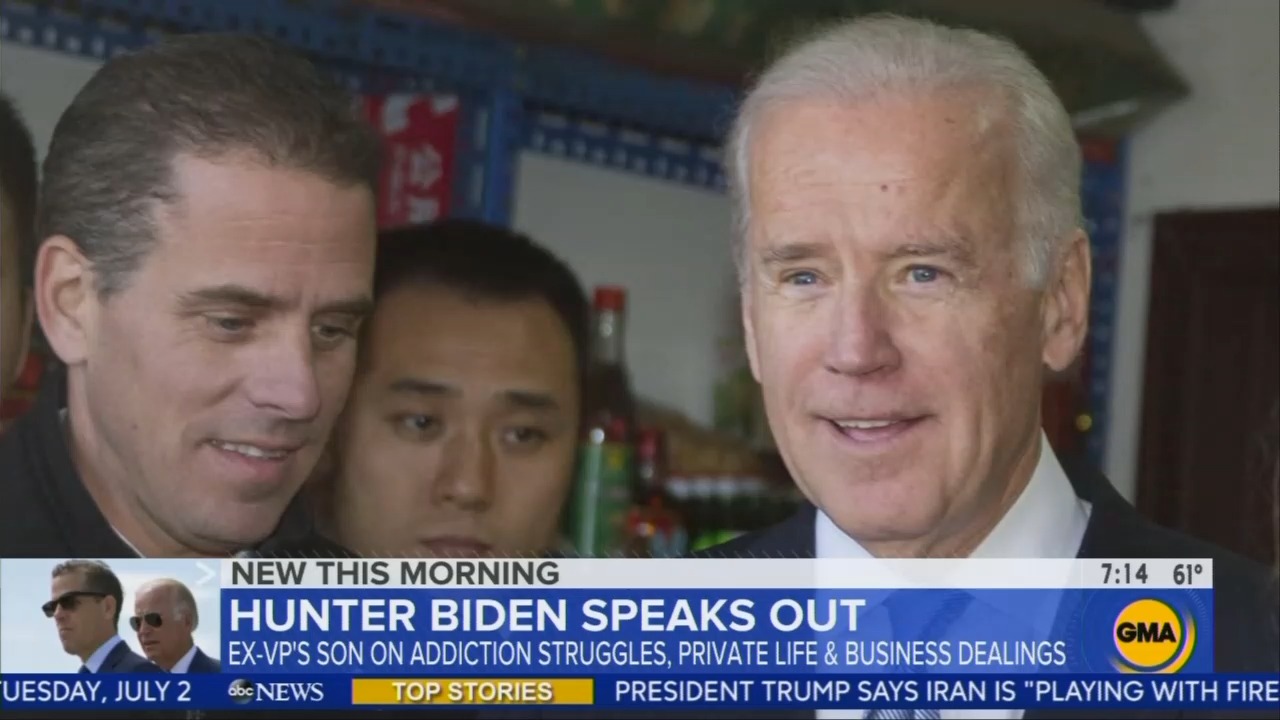 Vice-President Biden was playing a central role in overseeing U.S. policy in Ukraine, and took the lead in calling on Kiev to fight rampant corruption. On May 13, 2014, after Hunter’s role on the Burisma board was reported in the news, Jen Psaki, a State Department spokesperson, said that the State Department was not concerned about perceived conflicts of interest, because Hunter was a “private citizen.” Hunter told Burisma’s management and other board members that he would not be involved in any matters that were connected to the U.S. government or to his father. Kwaśniewski told me, “We never discussed how the Vice-President can help us. Frankly speaking, we didn’t need such help.”

Several former officials in the Obama Administration and at the State Department insisted that Hunter’s role at Burisma had no effect on his father’s policies in Ukraine, but said that, nevertheless, Hunter should not have taken the board seat. As the former senior White House aide put it, there was a perception that “Hunter was on the loose, potentially undermining his father’s message.” The same aide said that Hunter should have recognized that at least some of his foreign business partners were motivated to work with him because they wanted “to be able to say that they are affiliated with Biden.” A former business associate said, “The appearance of a conflict of interest is good enough, at this level of politics, to keep you from doing things like that.”

In December, 2015, as Joe Biden prepared to return to Ukraine, his aides braced for renewed scrutiny of Hunter’s relationship with Burisma. Amos Hochstein, the Obama Administration’s special envoy for energy policy, raised the matter with Biden, but did not go so far as to recommend that Hunter leave the board. As Hunter recalled, his father discussed Burisma with him just once: “Dad said, ‘I hope you know what you are doing,’ and I said, ‘I do.’ ”

ABC’s Davis clearly understood the threat. On GMA, she concluded that this was all happening to Hunter Biden “at a critical point for his father where any surprises or family secrets could impact his campaign.”

But at least ABC covered the latest details from the New Yorker, unlike CBS and NBC. This pattern was the same on June 20th. On that day’s GMA, David Muir wondered, “Hunter Biden and his firm make millions overseas in countries where his father, the former vice president, acted as the top U.S. diplomat?”

A transcript of the ABC segment is below. Click “expand” to read more.

WHIT JOHNSON: This comes as candidate Joe Biden's son Hunter speaks out in a new interview, opening up about his personal struggles, including a battle with drug addiction, his relationship with his father and business dealings that have come under scrutiny. ABC's Linsey Davis is here with more on that story. Linsey, good morning.

LINSEY DAVIS: Good morning to you, Whit. Incredibly candid interview with Hunter Biden who really gets into the weeds about some harrowing experiences and talks about drinking that started in high school, cigarette and cocaine use that started in college and he explains that he was a no show at his dad's kickoff event because these negative stories started surfacing. The youngest son of former Vice President Joe Biden now laying bare his struggle with drugs and alcohol, including at least five stints in rehab. Hunter Biden opening up to The New Yorker in a new feature story at a critical point for his father where any surprises or family secrets could impact his campaign, saying, “I was in that darkness, I was in that tunnel. It's a never-ending tunnel. You don't get rid of it. You figure out how to deal with it.

ADAM ENTOUS (Staff writer, The New Yorker): There are just too many examples I think in here of, you know, a person who's lonely and, you know, doesn't really have anybody to turn to. And who, you know, is just suffering and struggling to try to get some control in his life.

DAVIS: His addiction to cocaine led to a discharge from the Navy. Biden also describes a time he attempted to buy cocaine at a homeless encampment. Someone put a gun to his head before realizing he was a buyer. Biden opens up about his complicated relationships. After the death of older brother Beau in 2015 from brain cancer sent him back to rehab, he separated from his first wife Kathleen, eventually starting a relationship with Beau's widow Hallie Biden. “We were sharing a very specific grief. I started to think of Hallie as the only person in my life who understood my loss.” The article's author tells us about the tight bond between father and son. The elder Biden's calls and texts regularly interrupting the New Yorker interview. Once while Vice President Biden helped his son during a period of heavy drinking —

ENTOUS: He told his dad that he was okay when he wasn't. And it took his father, you know, taking a suburban and a very small Secret Service detail to his apartment literally to knock on his door and say, “Son, you know, I need you to get help,” effectively.

DAVIS: Then there's the matter of Hunter Biden's business dealings, allegations he leveraged his father's name to win business in Ukraine and China where Hunter accompanied his father on an official trip in 2013. Upon hearing the news that President Trump is investigating him, Hunter Biden recalls spotting a helicopter overhead telling his wife, “I hope they're taking pictures of us right now,” directing an expletive toward the president saying, “I don't care. Here I am living my life.” As for those overseas business dealings, Hunter Biden denies claims there was anything unethical and there has been no evidence that Joe Biden used his influence to help his son. But the watchdog group put it this way at absolute minimum there is a huge appearance of conflict.

JOHNSON: And this was no surprise to the Biden campaign. They knew it was coming.

DAVIS: The reporter for the New Yorker said multiple times during his interview the dad was calling and interrupting their conversation. It seems like this was the campaign's way of just trying to get out in front of this.