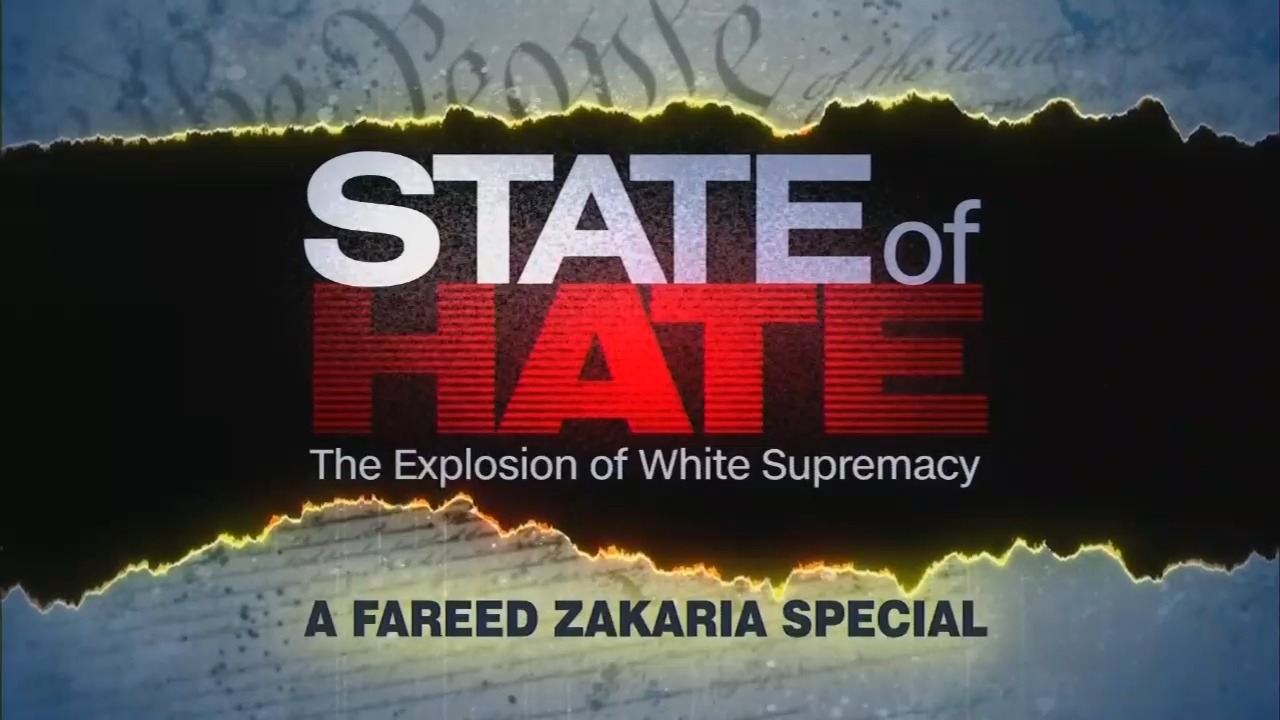 CNN devoted an hour on Sunday night to a documentary exploring the rise of white supremacists  in America and around the world. Unsurprisingly, the network tied Donald Trump to these bigots, blaming the “white supremacist hero” for “jumping on” the bandwagon of hatred.

Host Fareed Zakaria began the documentary with a montage of violence and racists: “The country is changing.... The fear growing.” As video of Trump appeared on screen, the journalist blamed, “And it’s spreading across the world.... A fire fed by politics.”

After mentioning hate-filled murders in Pittsburgh and Charleston, Zakaria noted that Trump has talked about Sweden’s problem with militant Islam.... Just like white supremacists do:

FAREED ZAKARIA: Even America's president jumped on the bandwagon.

DONALD TRUMP:  Sweden, who would believe this?

UNIDENTIFIED OFF CAMERA WOMAN: When they hear Donald Trump using language that they know comes from their ideology.... they feel energized and they feel that they’ve succeeded. 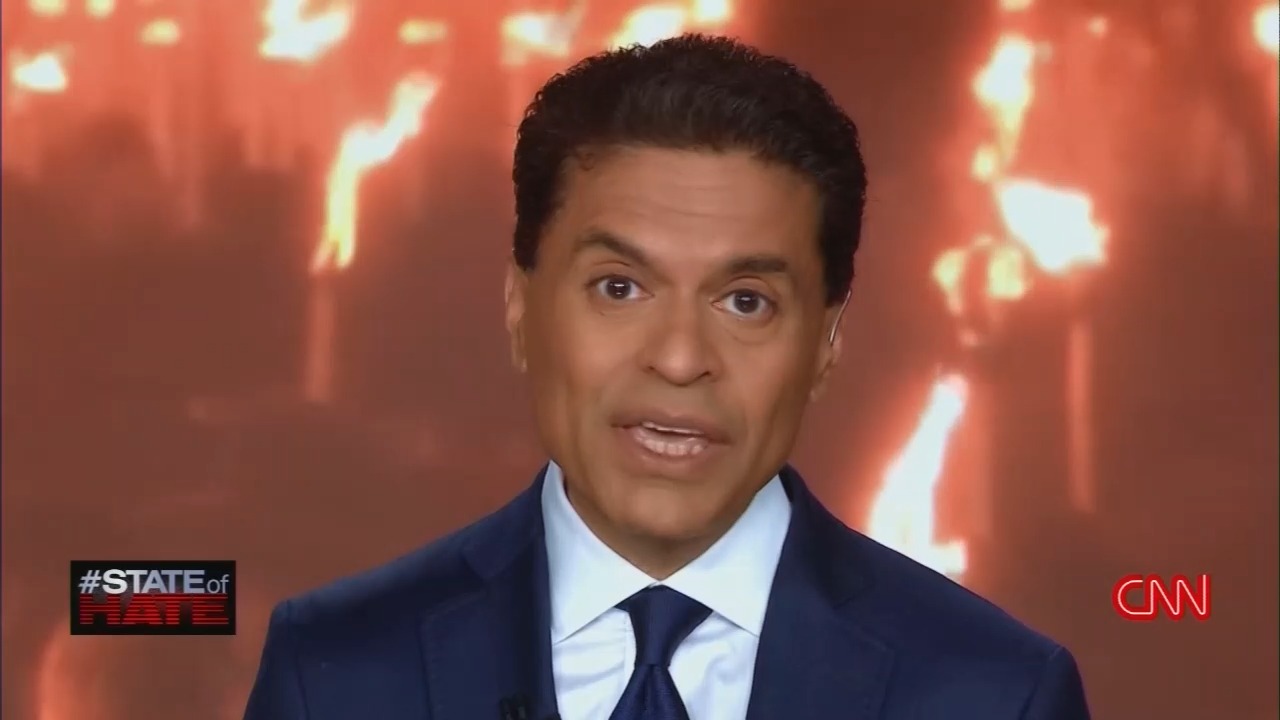 He also used clips of bigot Richard Spencer and former Grand Wizard of the Ku Klux Klan David Duke praising the President. Of course, Congresswoman Rashida Talib, who met with pro-Hezbollah activists and is guilty of repeated incidents of anti-Semitic behavior, was not used to tar the Democratic Party. Zakaria didn't mention her disturbing history:

ZAKARIA: At a recent hearing on white supremacy, Congresswoman Rashida Tlaib, a Muslim, read a letter she had gotten in the mail.

RASHIDA TALIB: “I was excited and pleased when I heard about 49 Muslims were killed and many -- many more were wounded in New Zealand. This is a great start.”

At the mid point of the documentary, Zakaria conceded: “Donald Trump is not a white supremacist.” But, he added, “There is no doubt that he is a hero to many in the white supremacy movement.”

Racist David Duke has championed Trump. He’s also backed Congressman Omar, a Democrat who stated that Israel has “hypnotized the world” and is “evil.”  But Duke's support for key Democrats wasn't mentioned as a problem.

Would the KKK and American neo-Nazis fade out into irrelevance if CNN could just stop promoting them?

A partial transcript of the special is below. Click “expand” to read more.

FAREED ZAKARIA: America is at war with itself.... Walking the streets of the United States.... Cities turned to battleground.... Charlotesville.... Pittsburgh.... Charleston..... In city after city, an army of hate whose numbers are soaring.... The country is changing.... The fear growing.... And it’s spreading across the world.... A fire fed by politics.

ZAKARIA: At a recent hearing on white supremacy, Congresswoman Rashida Tlaib, a Muslim, read a letter she had gotten in the mail.

TALIB: I was excited and pleased when I heard about 49 Muslims were killed and many -- many more were wounded in New Zealand. This is a great start.

FAREED ZAKARIA: This is not just an American story. There is now a worldwide movement of white supremacists. Sharing the twisted ideas on the internet. In March, a gunman massacred 51 people at prayer in New Zealand. In his 87-page manifesto, the terrorist cited his inspiration. White supremacists in America, Britain, Sweden, Norway.

All of these people believe they are being replaced and must fight to resist it. And much of this discourse on white supremacy is centered in the United States of America. How did this happen? Where did it come from? After slavery, the Holocaust, civil rights movement. The truth is, race has been the central conflict in American life from the day the Republic was born. We witnessed extreme racism before. In periods of upheaval and rapid social change. And now once again, we are living in such a time.

RICHARD SPENCER: Trump definitely energized the alt right. We have this connection. We can inflict his policies.

DAVID DUKE: We are determined to take our country back. We're going to fulfill the promises of Donald Trump.

ZAKARIA: Donald Trump is not a white supremacist. But there is no doubt that he is a hero to many in the white supremacy movement. The current upsurge might have been triggered, however, because of another president.

ZAKARIA: Barack Obama's election was a moment of joy and unity for millions of Americans.

ZAKARIA: But some, perhaps many, were shocked by it.

OBAMA: Whether our forebears were strangers who crossed the atlantic, pacific, Rio grande, we are here because this country welcomed them in.

ZAKARIA: But it has also awakened the darkest American impulses. One little remembered chapter holds a frightening reminder of where those impulses can lead. Ellis island, 100 years ago. Immigrants were pouring into the country at times 100,000 a month. Packed body to body on boats, penniless, hungry, desperate to become Americans.

ZAKARIA: It was also the year of a series of deadly terror attacks that began to hit the heart of Europe. It was ten days after the attack at the Bataclan theater in Paris that Sweden suddenly reversed course. It was painful for Sweden's leaders to announce the country was restricting its borders. But Sweden had quickly become overwhelmed. Percentage-wise, had it taken in more than any other country in Europe. Meanwhile, white supremacist groups seized on and exaggerated Sweden’s problems.

ZAKARIA: Even America's president jumped on the bandwagon.

TRUMP:  Sweden, who would believe this?

UNIDENTIFIED OFF CAMERA WOMAN: When they hear Donald Trump using language that they know comes from their ideology —

TRUMP: They’re having problems like they never thought possible.

UNIDENTIFIED OFF CAMERA WOMAN:— they feel energized and they feel that they’ve succeeded.