On Eve of D-Day, Colbert Plays Dress Up and Calls Trump Pro-Nazi

So that’s how Stephen Colbert honors D-Day? The far-left comedian on Wednesday marked the run-up to the 75th anniversary of Normandy by dressing up in a Navy captain’s uniform and performing a mock interview with Donald Trump. After the sketch, the Late Show host brought up Charlottesville and used the D-Day anniversary to call Trump pro-Nazi.

Colbert mocked, “Trump attended the commemoration of the 75th anniversary of D-Day where he read from a prayer by FDR on the radio. And then he remembered that fateful landing on Omaha Beach where the allies fought against the Nazis.” He then played a clip of the President from 2017 in the wake of the awful racist violence in Charlottesville. The two topics mashed together, Trump said, “Very fine people on both sides.”

Even Colbert’s liberal audience seemed sheepish about linking Charlottesville with the ceremonies in France. An audible “Oooh” could be heard. The host laughed at his own joke and simply added, “Yeah.” Earlier in the fake interview, Colbert asked Trump who was Churchill’s “greatest ally?” The doctored video showed the President replying, “Nazi Germany.” 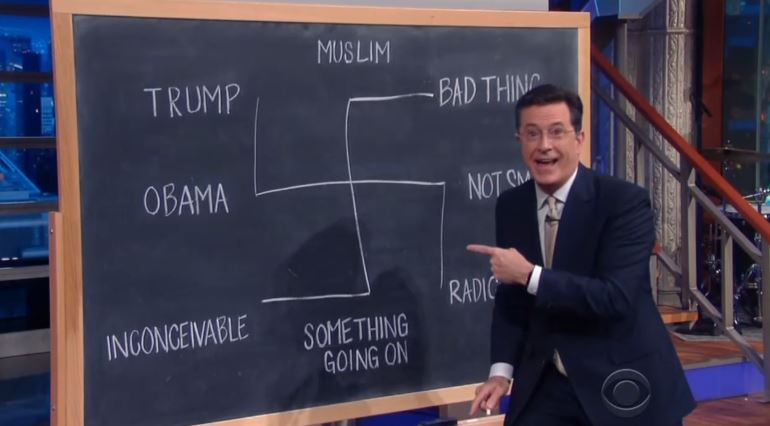 Using Nazi imagery is par for the course for Colbert though. In 2016, he drew a Swastika on a chalkboard to “figure out” Trump. (See image at right.)

When people wonder why this country is so divided, examples like this help explain it. Even while America honors the heroes of D-Day, certain liberals in the media can't resist taking nasty shots.

A partial transcript of the June 5 segment is below. Click "expand" to read more.

[Fake “interview” with Trump. Colbert is dressed up like a Navy captain.]

STEPHEN COLBERT: I was excited to have yet another chance to interview the president, the only problem that I had to do it overseas. So I loaded up the Late Show submarine and set course for England. President Trump thank you for sitting down with me here on the U.S.S Chuckle Bucket.

COLBERT: Now sir, do you have any English heroes.

COLBERT: Wrong, let's try another. Keep that answer in mind who was Churchill's greatest enemy.?

COLBERT: Do you know anything about Winston Churchill?

TRUMP: That is a great woman.

COLBERT: Before he left the U.K. Trump attended the commemoration of the 75th anniversary of D-Day where he read from a prayer by FDR on the radio. And then he remembered that fateful landing on Omaha Beach where the allies fought against the Nazis.