MSNBC Flashback: Someone Should ‘SH*T’ in Sarah Palin’s Mouth 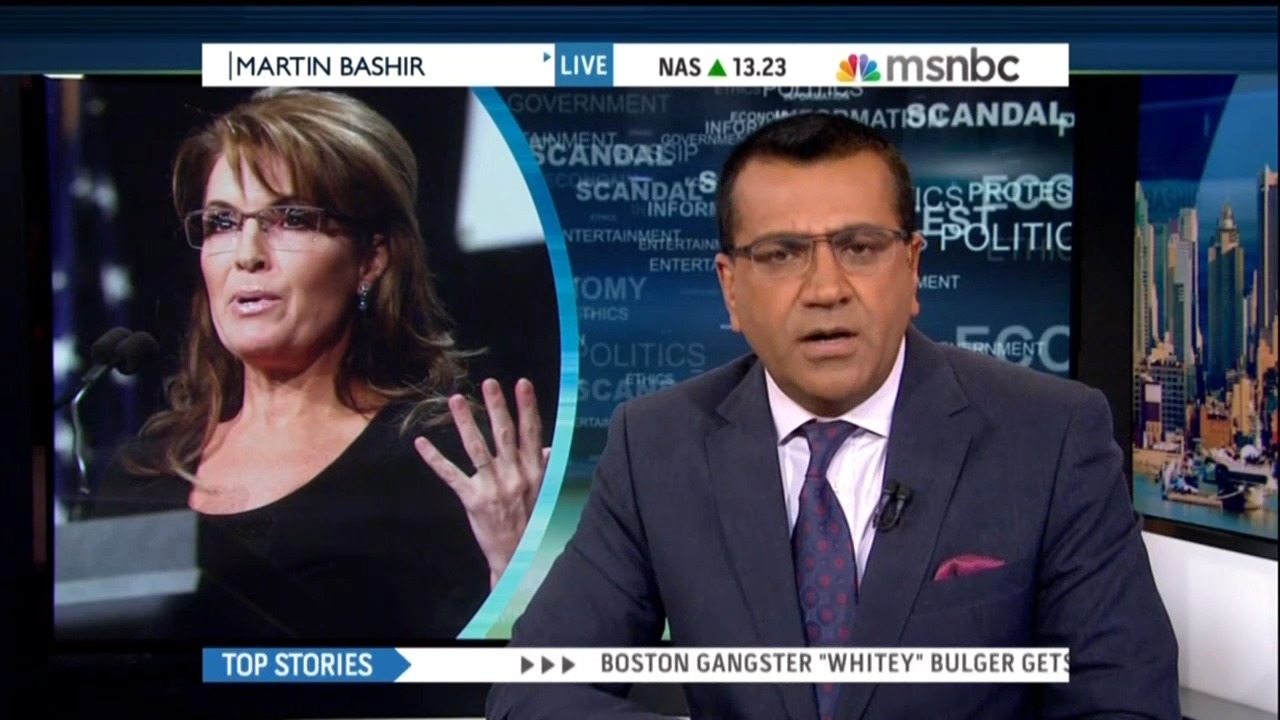 Civility. Journalists would have you believe that such a virtue died when Donald Trump became president and coarsened the national discourse. But a look back at what happened five years ago today tells you this simply isn’t so. On November 15, 2013, then-host Martin Bashir unleashed a shocking, vulgar attack on Sarah Palin, suggesting that someone needed to “S-H-I-T” in her mouth.

Bashir, supposedly a neutral journalist, recounted a speech from Sarah Palin, whom he denounced as “America’s resident dunce.” Palin compared the country’s ballooning debt to enslaving America’s children.  It obviously an analogy, not a literal connection to slavery.

But the unhinged Bashir compared this statement to a monstrous plantation manager from the 1700s who punished a slave by making another slave defecate in his mouth:

In 1756, [Thomas Thistlewood] records that “A slave named Darby catched eating canes; had him well flogged and pickled, then made Hector, another slave, s-h-i-t in his mouth.” This became known as Darby’s dose, a punishment invented by Thistlewood that spoke only of the slave owners savagery and inhumanity.

Why bring this up? So that the repellent Bashir could suggest someone commit the same act in Palin’s mouth:

Three days later, a chastened Bashir apologized: “My words were wholly unacceptable. They were neither accurate, nor fair. They were unworthy of anyone who would claim to have an interest in politics.” He resigned in December of 2013.

So the next time you hear someone on MSNBC (or another network) decry the uncivil, vulgar tone of our politics, remember the disgusting things said five years ago.

Today’s flashback is part of a daily and weekly Media Research Center series. To get the latest examples of historic bias, be sure and follow Rich Noyes on Twitter. Every day, he will tweet out This Day in Media Bias History. For the collected edition, check out This Week in Media Bias History, published every Saturday morning on NewsBusters.

A transcript of the November 15, 2013 Martin Bashir segment is below. Click “expand” to read more.

MARTIN BASHIR: It's time now to clear the air. And we end this week in the way it began - with America’s resident dunce, Sarah Palin, scraping the barrel of her long deceased mind, and using her all-time favorite analogy in an attempt to sound intelligent about the national debt.

SARAH PALIN: Our free stuff today is being paid for by taking money from our children, and borrowing from China. When that note comes due - and this isn't racist, so try it. Try it anyway. This isn't racist. But it's going to be like slavery when that note is due.

BASHIR: It’lll be like slavery. Given her well-established reputation as a world class idiot, it's hardly surprising that she should choose to mention slavery in a way that is abominable to anyone who knows anything about its barbaric history. So here's an example.

One of the most comprehensive first-person accounts of slavery comes from the personal diary of a man called Thomas Thistlewood, who kept copious notes for 39 years. Thistlewood was the son of a tenant farmer who arrived on the island of Jamaica in April 1750, and assumed the position of overseer at a major plantation. What is most shocking about Thistlewood's diary is not simply the fact that he assumes the right to own and possess other human beings, but is the sheer cruelty and brutality of his regime.

In 1756, he records that “A slave named Darby catched eating canes; had him well flogged and pickled, then made Hector, another slave, s-h-i-t in his mouth.” This became known as Darby’s dose, a punishment invented by Thistlewood that spoke only of the slave owners savagery and inhumanity.

And he mentions a similar incident again in 1756, this time in relation to a man he refers to as Punch. “Flogged Punch well, and then washed and rubbed salt pickle, lime juice and bird pepper; made Negro Joe piss in his eyes and mouth.” I could go on, but you get the point.