Given how tough CNN has been on Donald Trump wielding power during the first two years of his presidency, one should assume that the network will hammer the new Democratic majority in the House, right? No, of course not. In a preview of things to come, the network on Tuesday gushed over incoming House Speaker Nancy Pelosi as “the original Badass Woman of Washington.”

With no sense of embarrassment over sounding like the PR wing for congressional Democrats, the CNN Twitter page tweeted this: 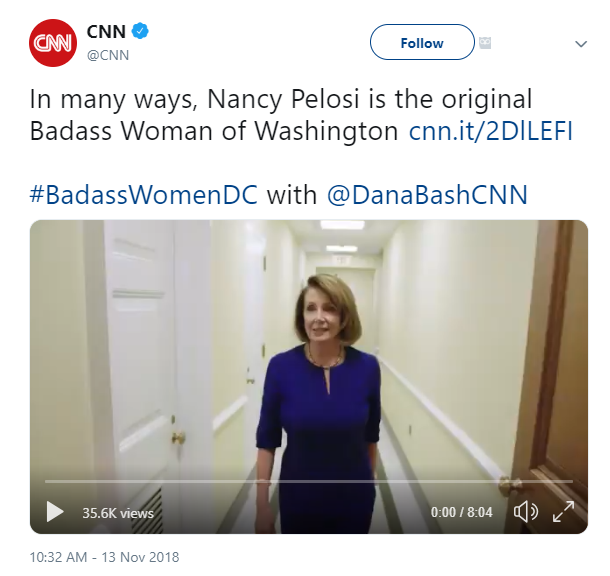 Reporter Dana Bash asked Pelosi ZERO tough questions and instead lauded on a woman-to-woman level: “Nancy Pelosi certain knows her power more than any other woman I’ve ever covered in politics. And I’ve always wondered how.” 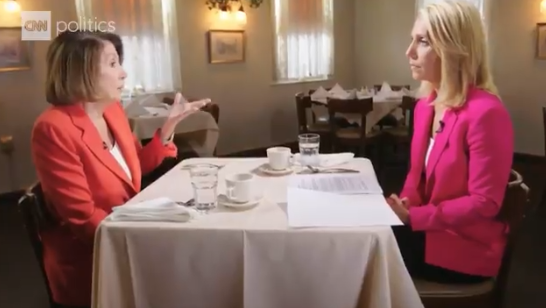 Bash wondered, “How do you think you wield your power differently than a man does?” Viewers are informed that the liberal Democrat “attributes her boundless energy to Italian genes.” Also, as the two toured a chocolate shop, she explains that Pelosi is “as strict about her chocolate as she is for standing up for herself.”

My, what journalism. CNN’s Twitter page touts its commitment to #FactsFirst and the bio proclaims: “It’s our job to #GoThere & tell the most difficult stories.” Where were the difficult questions to Pelosi?

In fact, the CNN.com version of the story lamented Republicans turning her into a “boogeyman – or boogeywoman, as it were.” Apparently, one criticism of the woman, whose lifetime American Conservative Union score is 2.5, is that she’s not liberal enough!

She's a frequent target of Republican ire for being too far to the left -- and she's also a target among progressives for not being far left enough.

This all sounds like how Pelosi was treated in 2007 during her first time as Speaker of the House. Then-Good Morning America co-host Diane Sawyer praised the Democrat as being “galvanized steel with a smile.”

Like a freight train, she’s already moved six major pieces of legislation through the House — everything from stem cells to minimum wage. And whatever side you’re on, when this new Speaker moves, she moves fast. Nancy Pelosi says power is not handed to you, you have to know how to win it. When she walks into a room, she is quiet, polite. But her fellow politicians say she’s galvanized steel with a smile.
— ABC’s Diane Sawyer on Good Morning America, January 19, 2007.

In 2019, Americans should be ready for the tough, speak-truth-to-power CNN journalists to turn into kittens as Democrats take power in the House.