MSNBC: Trump Is a 'Terrorist Sympathizer' for Mail Bomb Response

MSNBC guests and hosts went into full blame mode on Friday, lashing out at Donald Trump as “terrorist sympathizer” in the wake of the arrest of alleged mail bomber Cesar Sayoc in Florida. Additionally, Deadline: White House host Nicolle Wallace wondered if people would be scared of criticizing the President.

MSNBC politics editor Jason Johnson put the blame not just on the man who allegedly mailed the bombs, but Trump: “He has always shown a sympathy or dismissiveness towards terrorism. He is a terrorist sympathizer.”

In 2017, Johnson tried to smear Steve Scalise, the victim of Bernie Sanders-supporting attempted murderer James Hodgkinson. He promoted the discredited report that Scalise “may have” spoken to “white nationalists.”

Earlier in the show, Friday, Deadline: White House host Wallace talked to former CIA Director John Brennan, one of the targets of the bombing and wondered if people would now be fearful of criticizing Trump:

Do you worry that people out there will become afraid of criticizing this President because of the climate, because of his inability to understand a potential linkage between the tone and tenor of the political debate in this country and the actions of people who may be mentally unwell or determined to harm others?

NICOLLE WALLACE: Director Brennan, you were sent a pipe bomb. It was sent to you at the wrong network. It was sent to you at CNN. You were targeted. This wasn't the first attempt, though, to silence you. This was by a critic of the president. But the President's stripping of your security clearance was viewed by many of us as retribution for your criticism of the President. Do you worry that people out there will become afraid of criticizing this President because of the climate, because of his inability to understand a potential linkage between the tone and tenor of the political debate in this country and the actions of people who may be mentally unwell or determined to harm others?

WALLACE:  Do you see a direct link between the fact —  we looked just at October. We looked at Donald Trump's political rallies, the speeches, the people he's targeted just this month. And every single person, I think, who received a bomb has been a target of either a harassing tweet, a critical tweet, or a shout out from Donald Trump in his rallies. Do you worry that there are more people out there who, again, may be unstable, may be unwell, may be prone to violence, that are hearing the wrong thing from his kind of vitriolic political speech? 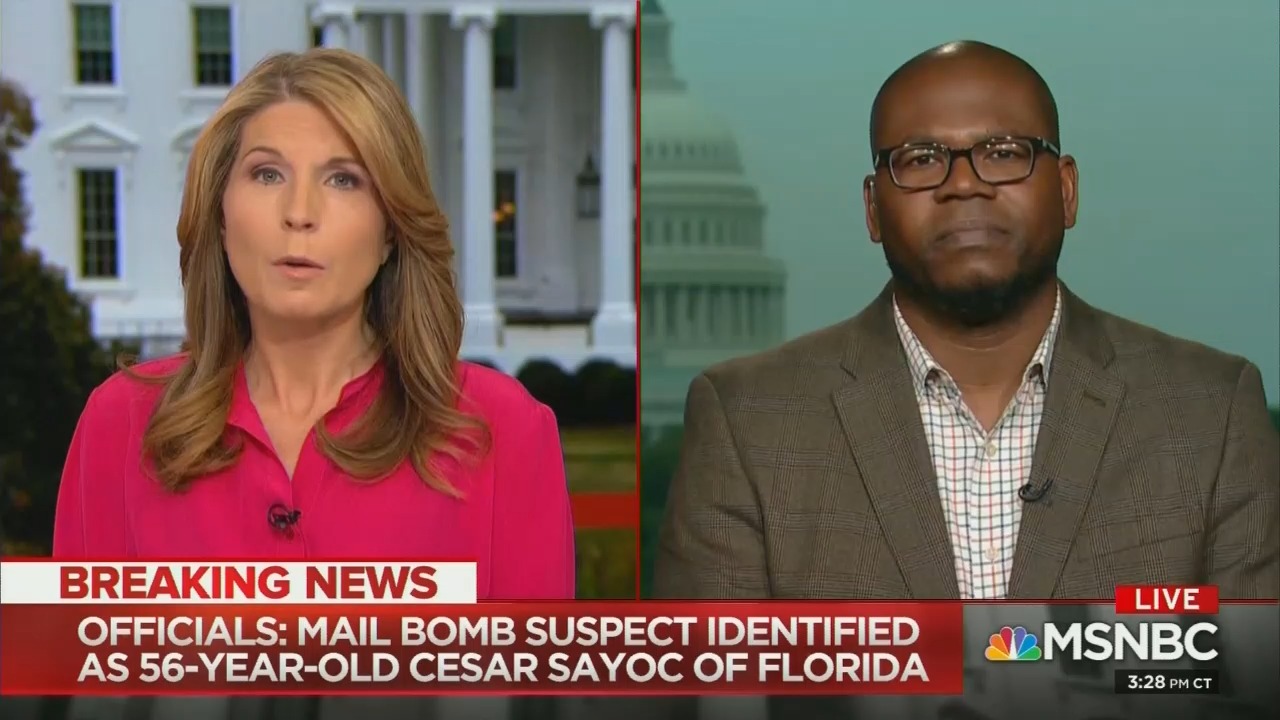 JASON JOHNSON (The Root): It's good to see that the FBI and national security agencies continue to do their job with vigilance despite the fact that they've been bludgeoned by this president for the last year for supposed incompetence and corruption. Our lives, as much as I may have criticisms of how law enforcement operates in this country, they are still our line of defense against maniacs and terrorists out there.

But I have to say, Nicolle, and this has always been a problem with this President. He has always shown a sympathy or dismissiveness towards terrorism. He is a terrorist sympathizer. I mean given the way he responded to what happened in Charlottesville, given how he responded to Khashoggi, given how he puts what happened today in context of how it affects the midterm elections, we don't have leadership in this country when it comes to domestic terrorism. This president foments it as much as he is occasionally forced to speak against it.