Does Brian Stelter even listen to himself talk? The same man who compared Donald Trump to “authoritarian” “strongmen” is now “offended by the idea that top White House aide Kellyanne Conway sees the CNN journalist as an anti-Trump Democrat. While talking about Russia on Sunday's Reliable Sources, Conway referred to “people on your side of the aisle.”

Stelter huffed, “I'm not on a side of an aisle. That's an offensive remark.” Conway pounced: “Well, tell America. Did you vote for Hillary Clinton or Donald Trump? How did your wife vote? Tell America.”

Stelter dodged, claiming: “I did not vote for president. I left that spot blank on the ballot that day. It's not appropriate for you to go around asking people who they voted for.” For someone who constantly attacks any non-Democrat, the CNN anchor is quite sensitive.

As for claiming he’s nonpartisan, Stelter in December of 2016 compared Trump to “authoritarian regimes”:

In March of 2018, he praised the “true patriots” who are “protecting” us from Trump. In May, Stelter described himself as a “Trump addict.” Those hardly sound like the words of a dispassionate, neutral observer. 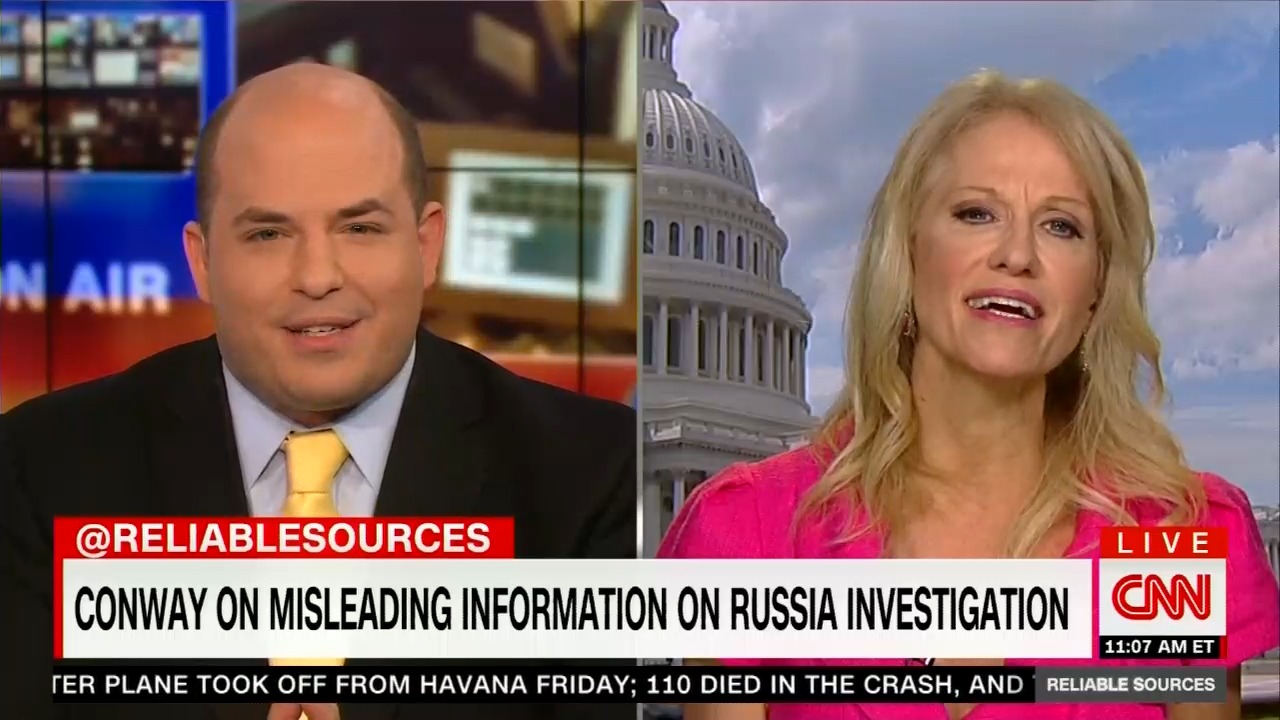 KELLYANNE CONWAY:  So, Brian, let me ask you a question. Let me ask you a question because you keep saying Russia's attack, Russia's attack on democracy. What evidence do you or anybody at CNN have that any of that interference, any of that alleged interference played into the election results? You're trying to conflate it to make America think that somehow Donald Trump didn't win this election fairly and squarely and you know he did. He won states the Hillary Clinton ignored, had nothing to do with Russia.

CONWAY: I'm not going to let you get away with saying that Russia had anything to do with this election result. What's your proof of that? What is it? Show me.

STELTER: OK, the WikiLeaks, the use of WikiLeaks —

CONWAY: Where is it?

STELTER: —  the abuse of the WikiLeaks documents, the stolen e-mails, all of that.

CONWAY: Whoa, whoa, Brian, you're trying to break news here and it's not working. I'm sorry, did you just say something that a lot of people on your side of the aisle are not willing to say?

STELTER: I'm not on a side of an aisle. That's an offensive remark.

CONWAY: Well, tell America. Did you vote for Hillary Clinton or Donald Trump? How did your wife vote? Tell America.

STELTER: I did not vote for president. I left that spot blank on the ballot that day. It's not appropriate for you to go around asking people who they voted for.

CONWAY: You probably thought she didn’t need your help. No, it's all appropriate to ask me things, but not other people. I think America should know.

STELTER: We asked you to come on the program because you're a representative of the President. Yes, I think that's the point of the interview. Can I ask you about leaking?

CONWAY: And the President thinks that if there's no nexus between any Russian interference and the outcome of the elections, and a lot of folks think that now, which is why they are moving on to someone's lawyer being on your network 160 plus times in a short amount of time. You don't have those screaming graphics anymore of Russian collusion.

Someone on a different network last night ran all these outtakes from people on your network and others where people, Adam Schiff was promising, you know, Russia conclusion. People are promising, we're going to have evidence of this. You confused America and you wasted time talking about that instead of things that really matter to America like a great prosperous economy, national security, renegotiated trade deals.

STELTER: I agree they matter.

CONWAY: — is to get the president and not get a story, you ought to just own it, just say it, because I know your viewers expect that now. Look at their comments all the time. Don't have Trump people on. They expect you to be reflexively, invectively anti-Trump. It's problematic.

STELTER: I'm glad you're here. The goal is not to get the president.

CONWAY: He's the president of United States. He's done things that nobody would have imagined in the first 16 months of a presidency. But people do appreciate it. If you want a --

STELTER: Including tearing down our American media and other institutions in ways that are going to —

CONWAY: You had a low approval ratings before he became president.

STELTER: We should recognize the flaws of your boss as well as his achievements.