Friendly actor interviews on the Today show don’t often include detailing a list of complaints about the film being “fictionalized” and “a disservice.” But those are the attacks that NBC co-host Savannah Guthrie brought up on Thursday as she pressed Jason Clarke, the star of the new Ted Kennedy expose Chappaquiddick.

The movie offers a blunt, unflinching portrayal of how the Democratic Senator abandoned Mary Joe Kopechne to drown in 1969. Using liberal talking points, Guthrie demanded: “It won't surprise you some people are taking issue with the fact this movie is characterizing this time, Bob Shrum, who worked for Kennedy, an old politico, called it a disservice.”

She added: “A  journalist who was there on Chappaquiddick said it’s utterly fictionalized. Were you surprised at that push back? What do you make it?” How often to journalists worry about fictionalized portrayal of real world events? Perhaps it matters when the film in question exposes how Kennedy coldly left Kopechne in their overturned car and then didn’t report the incident for 10 hours. 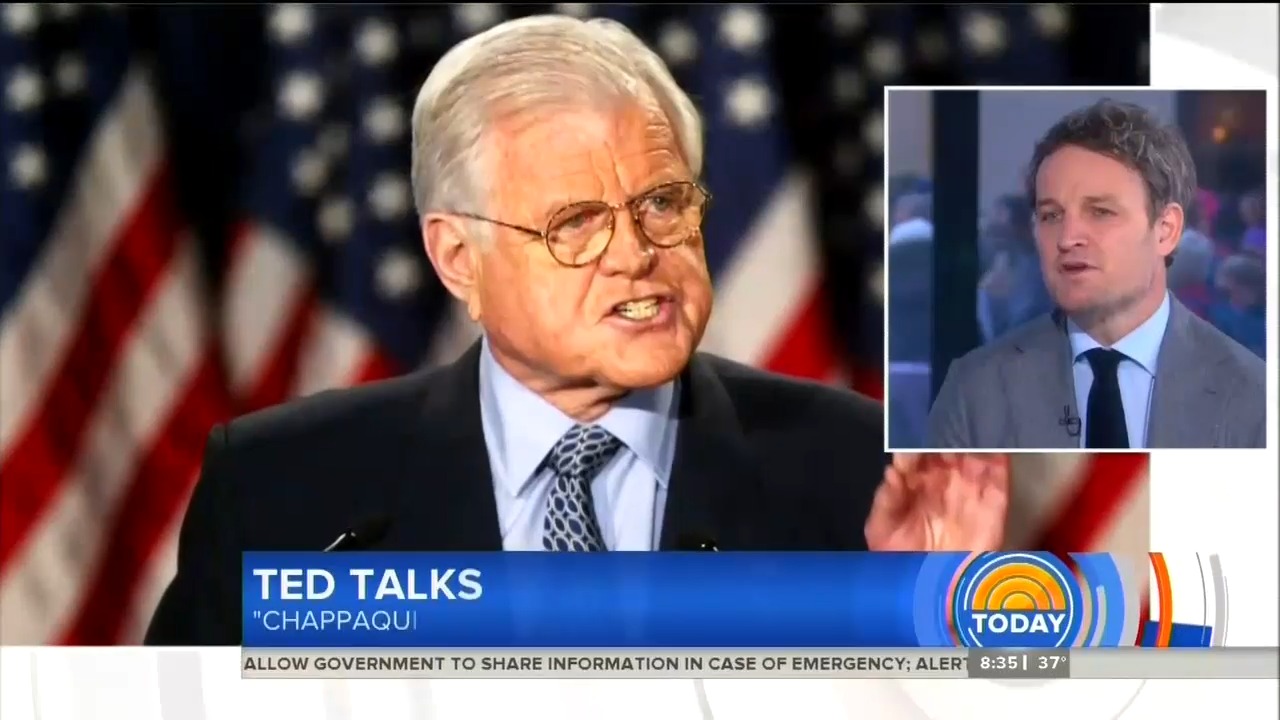 Clarke described the movie this way:

It’s a very strong, intimate look at a man's moral choices and responsibility lies not just with him but all of us. He is an elected official. I think that's where the story lies in history.

The actor explained that he knew what he was getting into when he agree to the role of Ted Kennedy: “People will think that this is either this is going to be a liberal love-in of a man who was flawed or it’s going to be a hatchet job of one of the great men in society.

The Australian-born actor talked to Deadline last week and excoriated the left for not caring about how Kennedy treated this woman. The Washington Examiner explained: 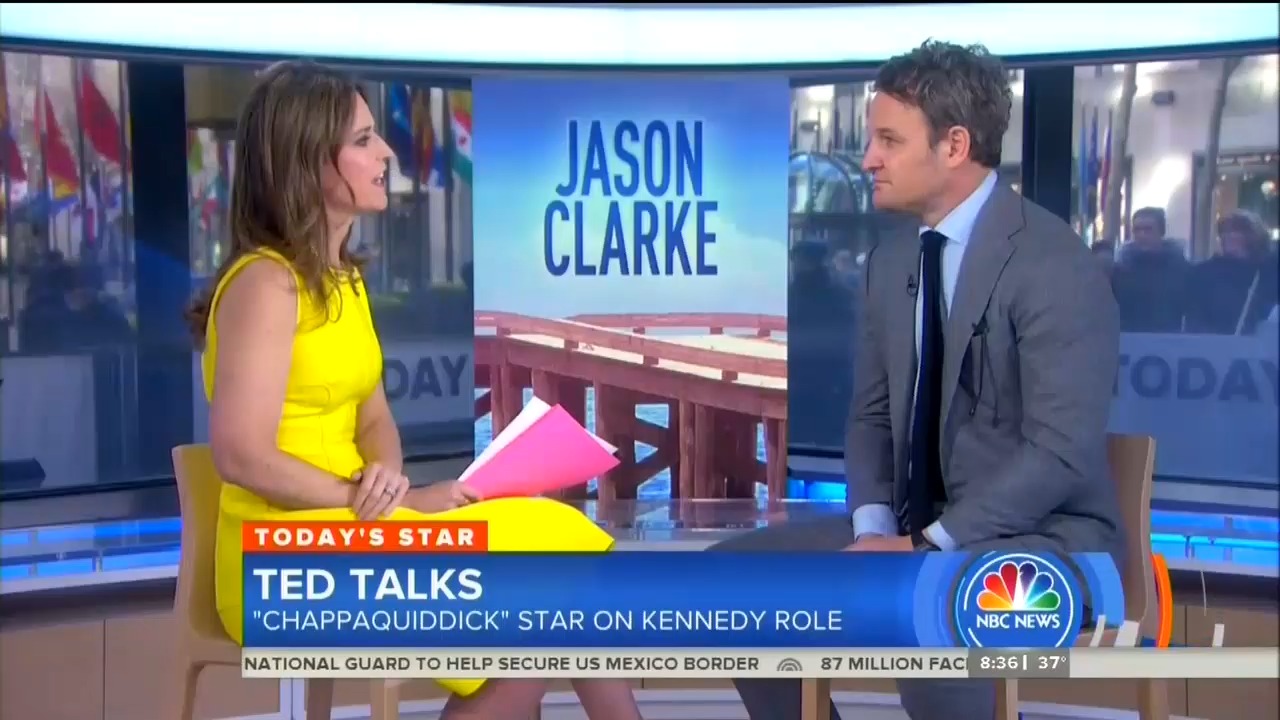 We’ve definitely gotten a lot interest from the right from Fox, but the left are not engaging. Bill Maher and Rachel Maddow passed on covering the film. I think Chris Mathews is still considering but hasn’t committed, and The New York Times isn’t really entering into a dialogue about it.

Why won’t Rachel Maddow have us on her show to talk about how we feel about this now?

After praising Kennedy’s legislative legacy, he concluded: “We paid a heavy price for lauding Ted Kennedy as the Lion of the Senate and everything else.”

None of this should be surprising as NBC in 1989 marked the 20th anniversary of Chappaquiddick with a gooey story on how Kennedy was the “king of the hill.”

SAVANNAH GUTHRIE:  It is one of the most infamous political scandals involving one of America’s most prominent families, the Kennedys. In 1969, Ted Kennedy accidentally drove his car off a bridge into a pond and his passenger Mary Jo Kopechne was killed. In the new movie Chappaquiddick, Jason Clarke plays Kennedy as he struggles to come to grips with what happened and how to explain it to the public.

GUTHRIE: This is a big role to take on, an iconic American figure.

GUTHRIE: It is. Is it distracting?  I should have brought you sunglasses.

CLARKE: No. It's wonderful. It is, absolutely. I mean, it sounds innocuous, doesn’t it? Drive a car off a bridge into a pond.

GUTHRIE: But with incredible consequences.

CLARKE: Incredible consequences and keeps rippling out. Excuse the pun.

GUTHRIE: Ted Kennedy, you're Australian, we know that. If people didn’t know now, we hear it in your accent. Were you familiar with this story? How much did you even really know about Ted Kennedy?

CLARKE: I was actually born the day before it happened, the 17th of July when they took off for the moon. I knew enough to go, “I think I know this event.” but I knew nothing when I started researching and it went down the rabbit hole how it happened, particularly the big shock was Mary Jo possibly, very probably, being alive and asphyxiating. There was a lot to learn. The more I researched the more I felt, wow, I need to tell it.

GUTHRIE: How would you describe the portrayal? What do you think the movie concludes, if anything, about culpability? I mean, this is one of the things that people are always going to wonder about.

CLARKE: They should ask about. The portrayal is intimate. It’s honest. It’s authentic.
We haven't strayed. We haven’t gone for salacious or tabloids. It’s a very strong, intimate look at a man's moral choices and responsibility lies not just with him but all of us. He is an elected official. I think that's where the story lies in history. That’s always ongoing. We always need to look at the people we love and vote for.

GUTHRIE: The movie, I think, really looks hard at the context as well. I mean, the fact that his brother, Bobby Kennedy, had just been killed and his brother's dream of reaching the moon was days away from being realized.

GUTHRIE: How do you think that affected Ted Kennedy?

CLARKE: Immensely. Ted had 14 children. He had jack's two and Bobby's 11 and his own child at that time. It was one year since his second brother had been shot and murdered in front of everybody. Bobby was the great liberal leader that was going to change politics, end the war. Mary Jo was one of his — a woman who believed and helping to make that happen. It's tragic. It really is an incredible one week of this man's life, who then went on to have an incredible life afterwards. You put it in context of who he was and where he was and how he got to this point upside down in a pond swimming for his life, it's wild.

GUTHRIE: It won't surprise you some people are taking issue with the fact this movie is characterizing this time, Bob Shrum, who worked for Kennedy, an old politico, called it a disservice and a journalist who was there on Chappaquiddick said it’s utterly fictionalized. Were you surprised at that push back? What do you make it?

CLARKE: I knew this going into it. People will think that this is either this is going to be a liberal love-in of a man who was flawed or it’s going to be a hatchet job of one of the great men in society. Ted Kennedy his life is not just defined on this. What he has done legislatively on the right side of history on civil rights, of education, health care stands. Ted did extraordinary things. He also did this. And I think it needs to be looked at. I don't think it does a disservice. I really don’t. I have great love  respect and the more I researched this family and this man the deeper that became. But I doesn’t mean I think we should walk away and ignore these things.

GUTHRIE: Well, it will be interesting to really dive into it as you have. And by the way, you nailed the accent, which is not easy to do for an Aussie, right?

CLARKE: Not with teeth and some prostetics. It was a bit more difficult.

GUTHRIE: Jason Clarke, thank you so much. The film is called Chappaquiddick. It opens in theaters tomorrow.